Skip to primary content
I had a great night sleep last night but unfortunately, Melanie didn’t.  Sleeping in a room with eight strangers does take a bit of time to get used to.  My biggest concern was rolling over during the night out of my very narrow upper bunk but even that I was able to deal with.  The room was warm enough that my blanket was repurposed as a wedge to keep me rolling towards the wall, rather than the floor, two meters below me.  The ladies on the third level of bunks each had safety bars protecting them from falling but I’m too macho for that.  (Insert tongue in cheek smilie face here).
I was a little surprised and miffed that someone in the room had set an loud alarm to wake up.  Anything more than a vibrating phone in an albergue is definitely not proper pilgrim etiquette.  I was thinking of giving the culprit one of the left over pieces of my mind but I am glad that I checked the time first.  It was 6:45am, 45 minutes after I normally get up and 45 minutes before the communal breakfast.  Normally, there are always a small group of pilgrims leaving the albergue on this route at 5:30 or 6:00am.  The majority are out the door between 6:30 to 7:00am.  Today, I think everyone stayed late just for the experience of this place to last a little.  As I said, this albergue and the volunteers here are special. 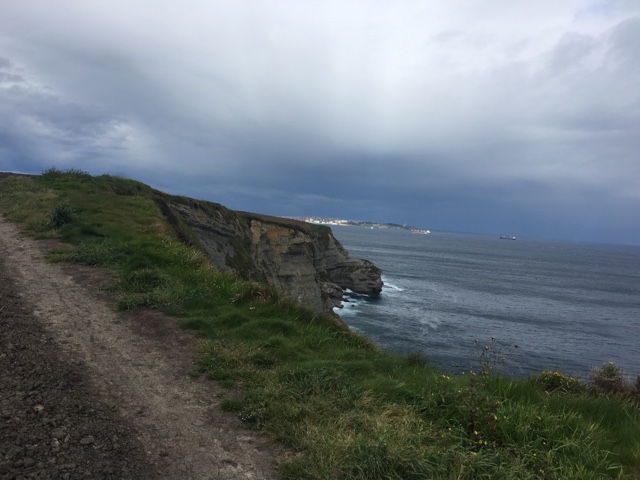 During breakfast, a Frenchman and his six year old son sat across from us and next to Fr. Bart, a Jesuit priest.  I entertained the young boy with my ridiculously childish magic tricks while I half listen to his father try to argue that Jesuits are elitists with Fr. Bart.  Now, I have eight years of Jesuit education and I don’t know anyone who has EVER won an agreement with a Jesuit priest on even a less confrontational issue so I knew this guy was in for a beating.  At one point, when he came up for air, the Frenchman tried to change to topic by saying how great it will be today to walk in the glorious sun.  I knew right away that God – who is actually Jesuit himself – was going to teach the Frenchman a lesson. As we then left to collect our bags, we noticed that the sunny clear skies were quickly moving away from our direction of travel and were being replaced with very dark, ominous clouds. 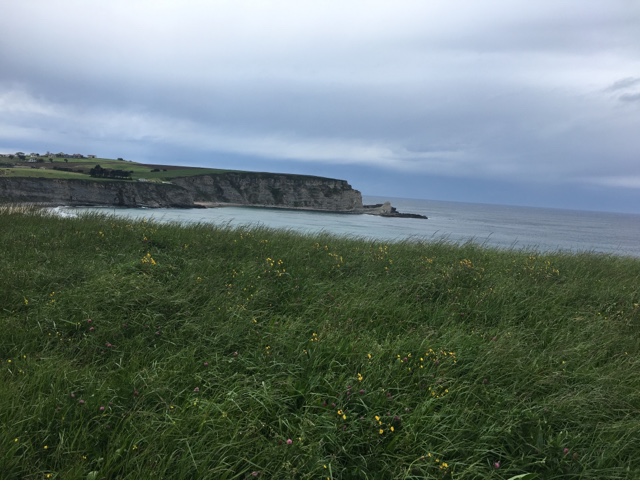 We finally set off at 8:30am with the only firm commitment to walk the real marked route, not another of Gronze’s “just follow the highway” routes.  We followed the well-marked route to Galizano, along mainly two small country roads.  There were seven of us in our group walking together to Galizano including Fr. Bart, Danish Hannah and Lisbette, Mexican David, another young German girl who slept on top of me last night, Melanie and me.  Once in that town, it was a short walk to the coast. 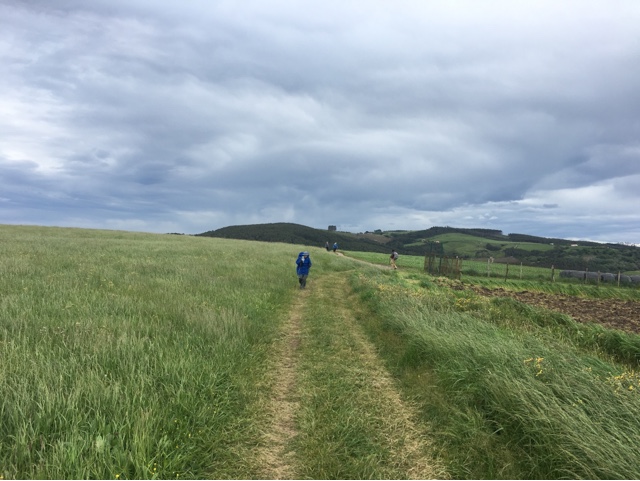 We were initially treated to some outstanding views from the cliffs above the ocean but I also notice that the wind had picked up.  We were expecting rain and we could still see more clouds coming towards us but we were still hopeful of good weather.  Hope never guarantees results though.  The wind didn’t just “pick up”, it went full gale-force on us.  When it wasn’t blowing directly in our faces, it was blowing us toward the cliff edge only a meter or two away from the dirt trail.  I didn’t fancy falling 100m to the rocks or sea below so I was usually leaning about 10-20 degrees into the wind.  When there was a brief lull, i had less that a second to adjust my balance or I would be face down on the ground – at least not over the cliff.  Melanie had already put on her raincoat and it acted like a parachute.  At any minute, I expected to see her parasailing, without the need for a boat or a tether. 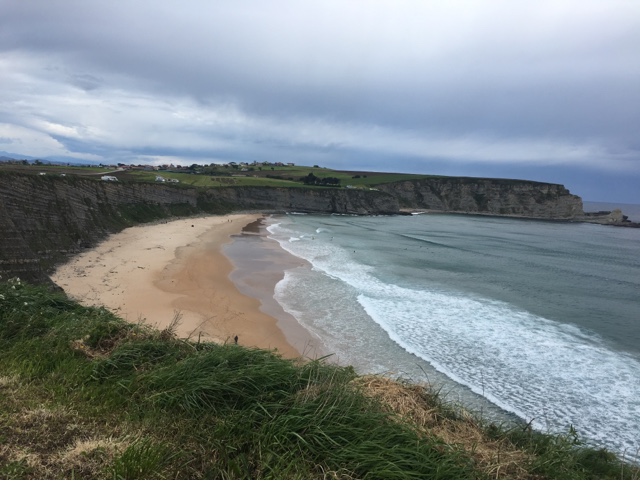 About halfway through this 10km section, the rain started with earnest and was coming sideways from the sea.  It felt like we were being hit by tiny buckshot. Despite the good views, this was getting a little messy.  At the last part, we were supposed to climb down to the beach and walk along the sand but when we got there, it looked like a sandstorm in the middle of the Sahara.  If we stood still for a minute, our feet would have been buried.  Mind you, there were still hundreds of surfers on the beach and in the water here but we were out of our depth.  Fr. Bart and German altitude sleeper were well in front but the rest of us found trails to follow through the forest behind the beach, heading to the ferry point to catch a boat to Santander.  When we got to Somo, we used David’s language abilities and we took the advice that we got last night and asked three Spaniards the directions to the ferry.  We then averaged out the answers that we received and managed to find the place.  We even picked up the German girl in the process when we found her wandering the streets. 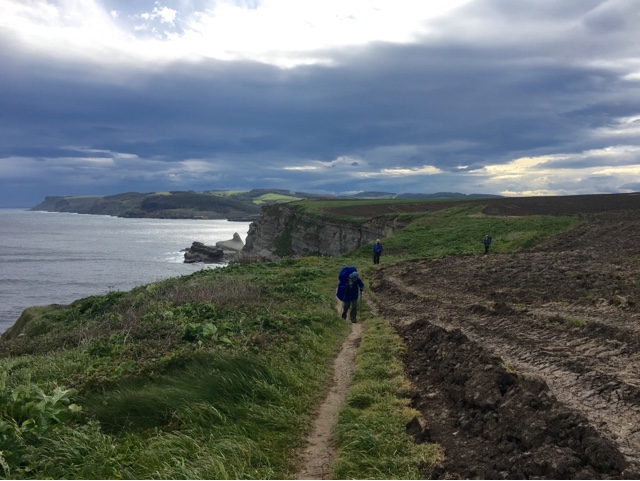 At the ferry stations, there were about 80 people waiting for the 11:55am ferry, including many pilgrims who likely walked the coastal route, rather than the shorter highway route.  With the waves, the ferry was a little more exciting than it normally would be but we unloaded on the Santander side and said goodbye to many friends.  Most were stopping in that large city and some were even staying for two days to sightsee.  Melanie and I were in a small minority who planned to walk further but we did enjoy having a view of some of the impressively large and old buildings there.  We also had some lunch before leaving, more to thaw out rather than replenish ourselves. 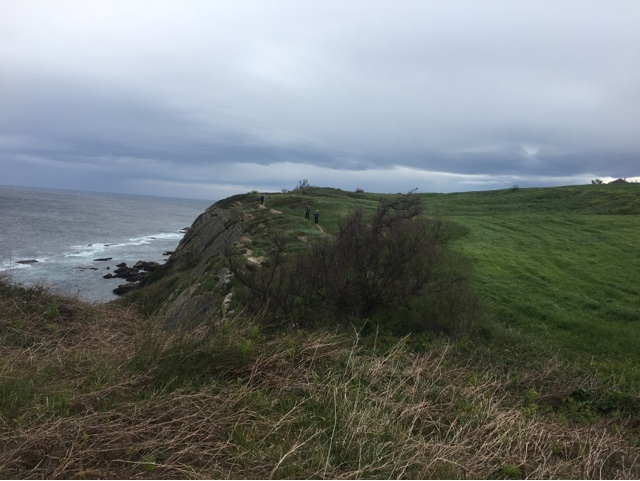 The walk out of Santander was one of the more enjoyable walks out of a big city that I recall.  In the city, the trail was in the very wide central mall between a boulevard.  Outside the city, we just went from suburb to suburb along the main road at first, then quiet residential and rural streets. 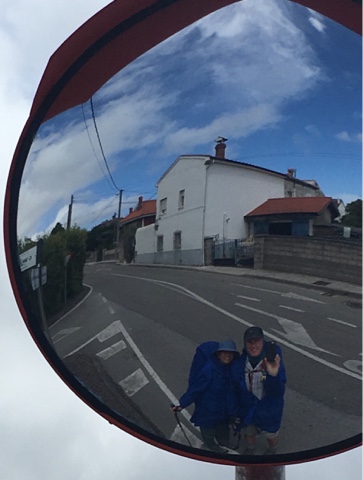 We finished today, going all the way to Mompia where we are staying in the Alcamino Hotel.  For those following us, if you do stay in this hotel, which is otherwise a very nice place and even serves dinner downstairs (after 9:00pm, of course, whatever you do, do not stay in room 208.  For some strange reason, there seems to be a lot very fine beach sand all over the floor in this room.
Peace y’all.