Skip to primary content
Today was expected to be a long, mostly flat day, walking on roads in light rain.  The sun had other plans.  It was sunny and hot which made the way more challenging.  Rarely do I prefer rain but flat days on roads is the exception.  I almost always prefer clouds but you can’t always get what you want and today was one of the days that we didn’t.
We were out the door from our hotel at a respectfully early 7:15am.  Note if you are following us, this was already our first mistake and you will see why in a moment.  We followed the sea promenade northeast on the Laredo peninsula almost to the tip.  Before catching the ferry across to Santoña, we stopped at the first café that we had seen open all morning.  We had our regular light first breakfast and then walked the final 10 minutes to where the ferry departs from – except that at the gate, there was a sign that said the first ferry is at 9:00am and it was 8:20am then.  Another pilgrim arrived at the same time, David from Baja, Mexico. So we waited.  Then a German group of five arrived, then Jean-Claude, then a couple of Dutch.  By 9:00am, there were 15 of us queued up as the boat arrived.  There is no pier but when we walked to the end of the boardwalk, the ferry boat came close and then extended a ramp.  Great service as I was picturing wading into the sea to board. 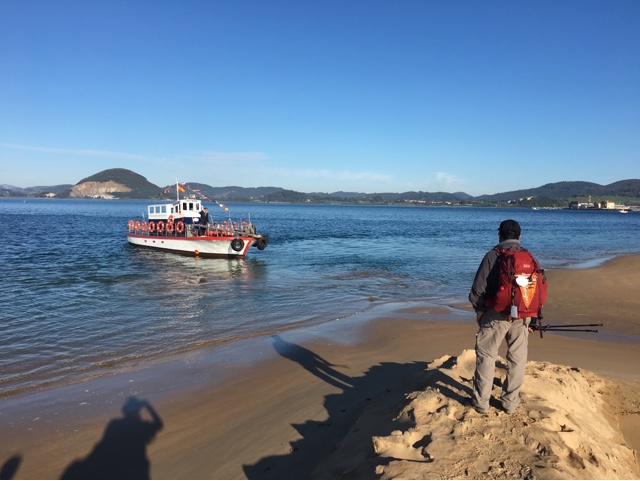 If you’re following us, don’t get to the ferry before 9:00am.  It holds 60 people so it doesn’t help getting there early.  I missed out on either 40 minutes sleep or a somewhat rushed free 20 minute breakfast buffet at the hotel.  The ferry is 2€ and as exciting watching my clothes dry – which is actually what I am doing now.
Once we got off the boat at Santoña, we formed a pilgrim parade through town and past the prison. After 4km, mostly along a roadside walking track, the fun began.  We knew we had a steep 100m climb and descent but we thought it might be stairs over some hill because the elevation profile in the Gronze site looked so steep.  After a short walk at the end of the Berria beach, we turned onto a sandy path that almost immediately started getting steeper and steeper.  It wasn’t stairs at all.  It was a goat path!  Some older and less mobile pilgrims – not Melanie or me – were occasionally taking off their backpacks and throwing them to the next level before scrambling up.  It was like an Outward Bound session.  At the top, the views back to the Berria beach, Santoña and even Laredo were stunning.  The view a few steps forward to the El Brusco beach and the town of Noja were nearly as good.  The descent for some was also done by taking off their bags and handing them down before coming down small levels backwards.  If Melanie and I could handle the trail, I was surprised that others were having trouble but I don’t know their medical issues. 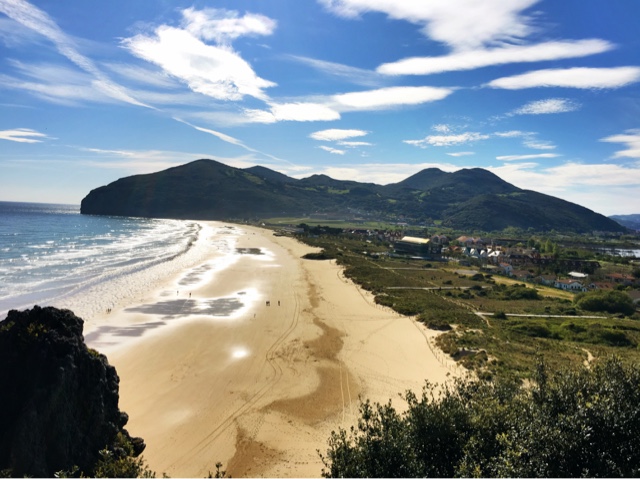 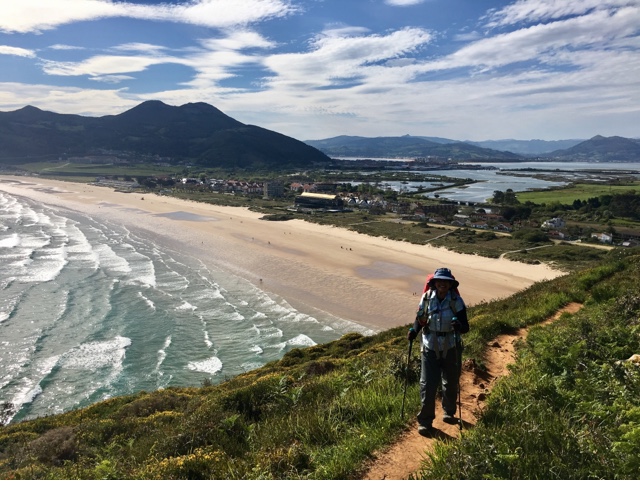 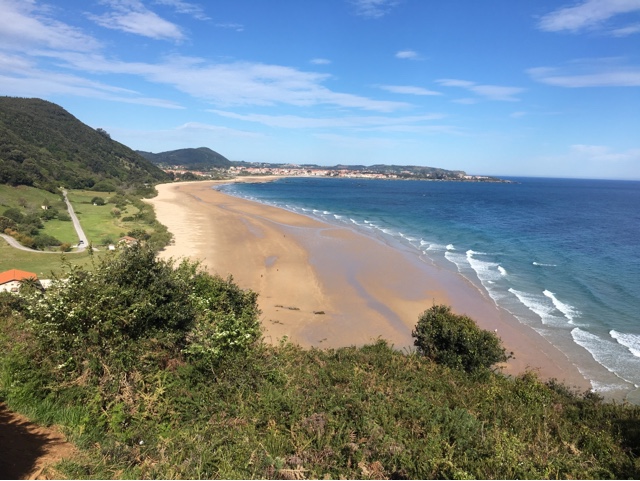 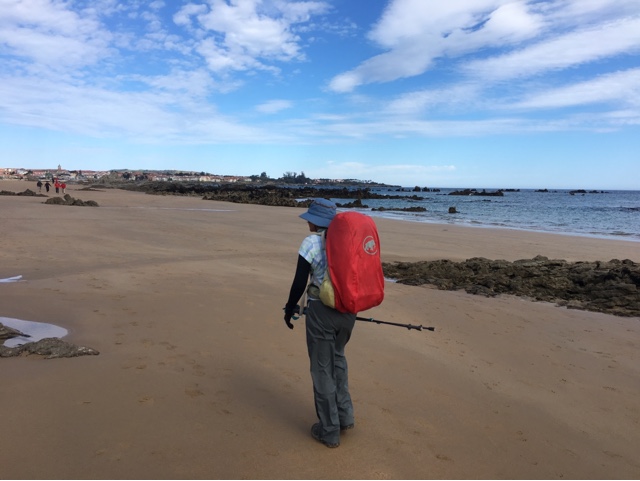 Once in Noja, we stopped with Mexican David to have a light lunch as Los Penones, fully realising that we only had a single breakfast.  We realised at this point that we were about half way through the day’s walk.  That was surprising and encouraging as I would have guessed less. When we started walking again, a car stopped next to us.  The man rolled down the window and I thought to myself “he is going to ask a pilgrim for directions”!?!?  That didn’t make sense but he actually asked us in Spanish if we were going to Güemes.  I replied that we were heading that way and he said “Okay, keep going straight” and then drove off!  That’s was funny to us because we knew the route to Güemes was all on twisting country roads, turning from on road to the next. “Keep going straight” indeed.
We followed the arrows along that twisting, turning route about 6km to the town of San Miguel de Meruelo where we walked through town , instead of around it, in order to stop for an after-lunch second breakfast.  We also replenished walking snacks at the mini-grocery store where we had a great time practicing Spanish with a lovely little family. At this point we looked at the map and made our plan for the rest of the day’s walk.  We decided to walk a more direct and flatter route to the town of Güemes and see if we could find accommodations in a posada, bar habitacion or casa rural rather than following the arrows to the albergue which was 1.5km outside of the town. The route would save only 1km but also 50m of a hill.  That wasn’t much but after yesterday and the sun of today, it helped. 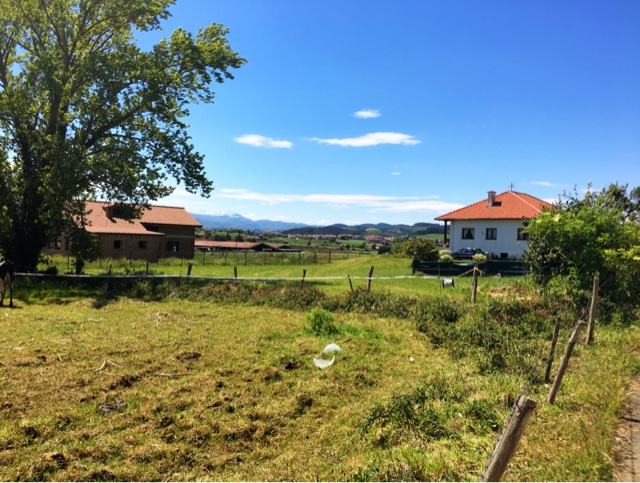 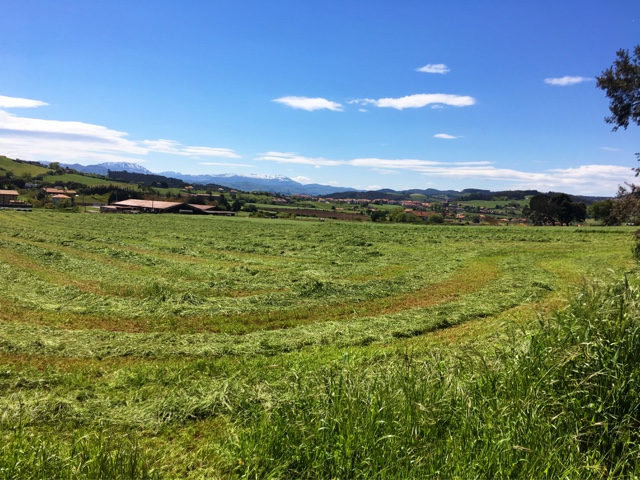 Well that didn’t work.  Because of the long weekend holiday, all the rooms in town were fully booked.  We had to walk to the albergue anyway.  God works in mysterious ways because this albergue is absolutely fantastic.  The facilities are decent, we have seen better but the setting is incredible and the atmosphere is truly electric.  The volunteers who run this donativo albergue put so much into it that whatever we would have paid for a room in a fancy B&B would not be quite enough of a donation here.  Before dinner we had a 30 minute talk on the spirit and history of this place and the “Camino de Vida” that was one of the highlights of all of my Caminos. If you are going to walk the Norte, a stop here is an absolute must. 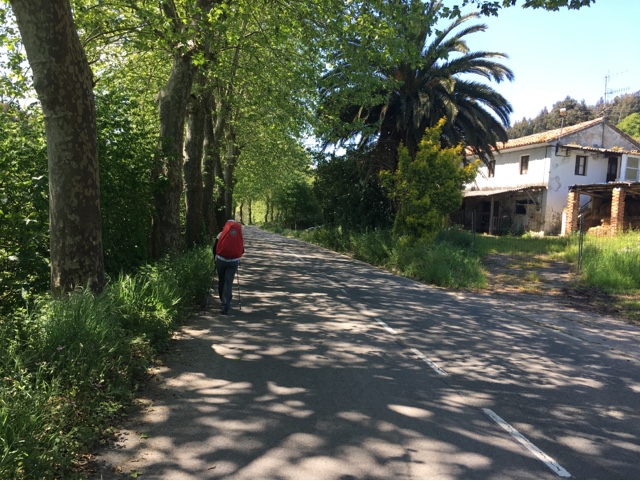 That’s enough for now.  The hospitalero is about to take us on a tour of the hermitage of the Camino de Vida, out back.  Peace Y’all. 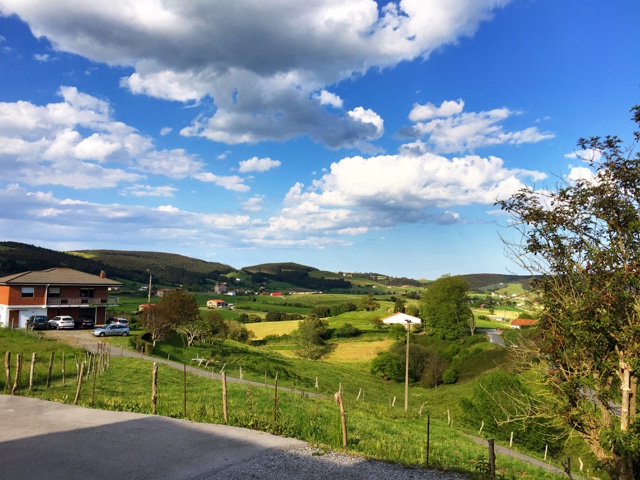