Skip to primary content
Wow, what a day! It was great walking, just a lot more than we expected.  I have prepared for this Camino by taking information off a semi-official Camino website called Gronze.com.  They really let me down today.  It told us that the walk we planned for was 26.6km.  We knew we could manage that but with a probable 29km day tomorrow, we were hesitant.  We set out following the arrows from last night’s hotel and never looked back. At about the 15km mark, I was surprised to see the arrows turning east.  That didn’t make sense so I looked in the guidebook (for the first time in a month!) and noticed that today’s distance was actually going to be 30.0km, by their calculation.  I looked at the screen grab of the Gronze site and realised that their 26.6km distance was based on an unmarked “just walk along the highway” route! in addition, we had already passed the point where we were supposed to join that ugly walk.  We pressed on, following arrows and sometimes just following common sense.  It made for a very long day.
The day started off well enough even though I hit the snooze button twice.  After a quick croissant & juice (me) and tostada & café Americano solo (Melanie), we headed through town until, just at the edge of town, we saw the unmistakable small round stadium – the Plaza de Toro (bull fighting ring).  It had my attention until I remembered that the pilgrim’s albergue was supposed to be next to it.  Sure enough, there was the tiniest building in the whole city and, to my further surprise, there were about a half dozen tents pitched on the grass behind the building.  At 8:00am, the temperature was already up to an impressive 4 degrees Celsius!  I can not imagine staying in a tent in last night’s weather amid 25km trekking days. 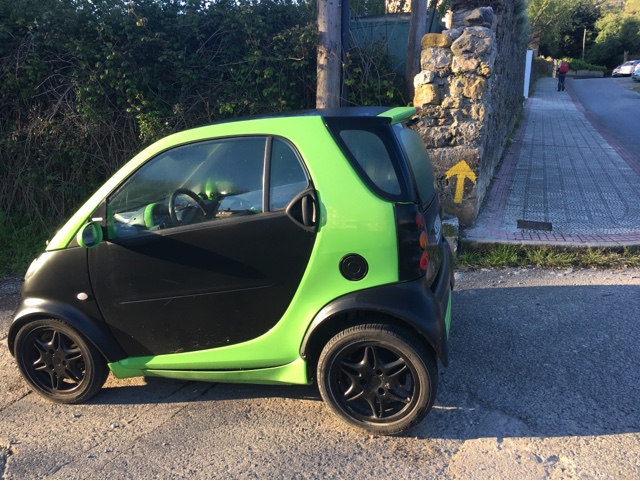 After passing under a highway – one that we would come to hate – we had a nice walk on a rural road for about a kilometre and a half.  We’re then walked within earshot, if not directly next to that dreaded highway. A few few kilometres into that walk, there were about a dozen pilgrims, all walking near each other.  in the village of Islares, most every was ready for some peace and quiet from the traffic and went into the Bar Elisa, just off the Camino near the San Martín de Tours church on the main trunk road – a road which I also now hate.  It turns out that just at the end of this village, there is a much nicer looking cafe with lots of outside seating which looks perfect for pilgrims but the location means they probably get very few of us in there. 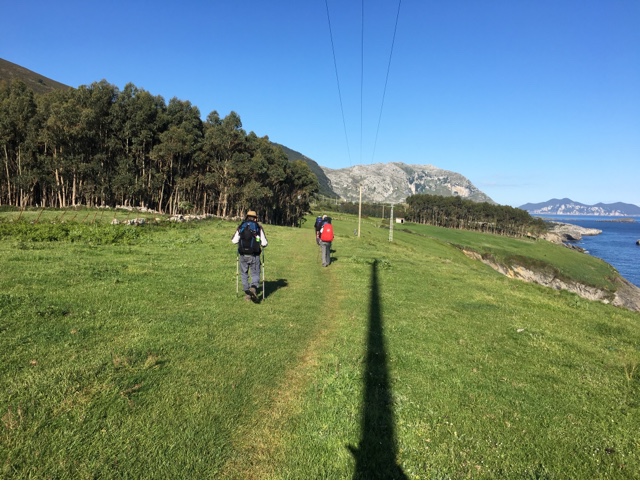 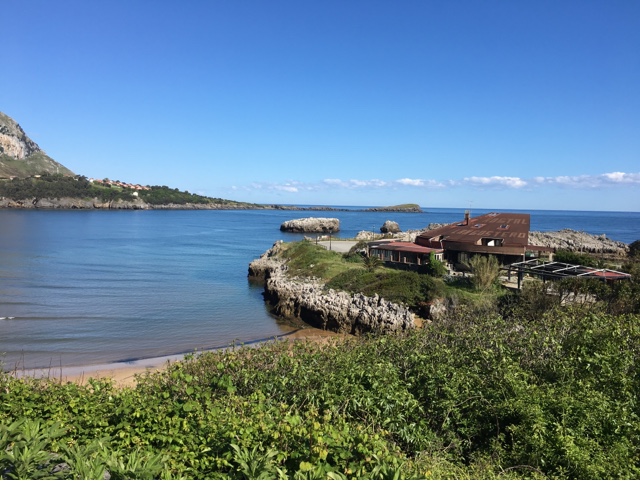 We then turned south on the trunk road, walking on the small shoulder, until just going underneath the highway bridge and waving goodbye to it for several hours.  I was surprised, and I guess happy, at that point that we were taken on a route to our left off the trunk road – finally.  This new section includes a fairly small hill on a rural road.  We thought this was just a short detour from the GPS routes from the guidebook but it turned out that it dropped us back down to a different trunk road south of where we supposed cross the river.  We were still parcelling the GPS route no but on the wrong side of the river with a decent detour to get back.  What was happening? 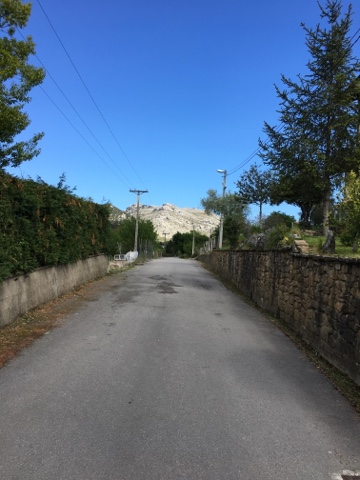 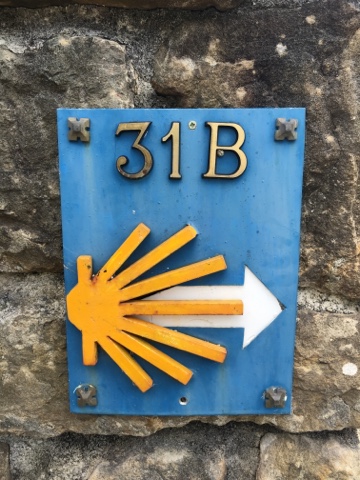 Eventually, we reached the village of Rioseco, needing to turn northwest to get to where our GPS tracks were telling us to be and the arrows turned us off the road to the east!  What is in the east? Irun and we are not about to walk back there! At this point I suggested we ignore the arrows and head down to the bar on the main road and figure out what was happening.  It was about at this point that we found out the trail was going to be much longer than planned if we kept following the arrows.  We decided to make our own way to Laredo, mostly using the GPS tracks that I had. 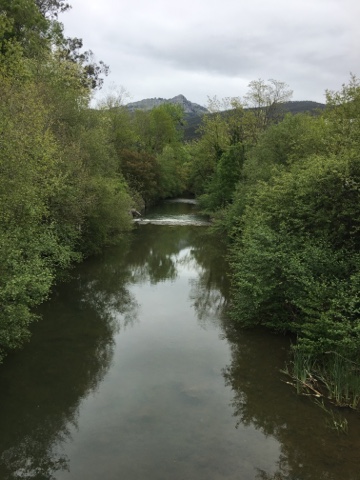 For anyone following us, it is a mountainous variation but we liked it a lot.  As we walk slower when either climbing or descending, I’m not sure it saved much time but it was likely a little shorter than the marked trail.  From the bar in Rioseco, we walked the main road westward and turned right onto the street going past the Vitrinor factory. After crossing the river next to it, at the T-junction we turned left and climbed the hill to Santa Cruz. At the T-junction there, we turned left, following the road west then south the west again all in, about one kilometres from Santa Cruz.  When the road finally turned north, we instead kept heading west onto what looked like a tiny, steep paved trail.  This 500m section took us over to the hamlet of Lugarejos and shortly afterward the Ermita of San Memés.  This last trail wasn’t actually steep for very long and it was paved all the way, despite what my GPS said.  The whole variance from Rioseco was in beautiful forest coverage and only two cars passed us the time we were on it. 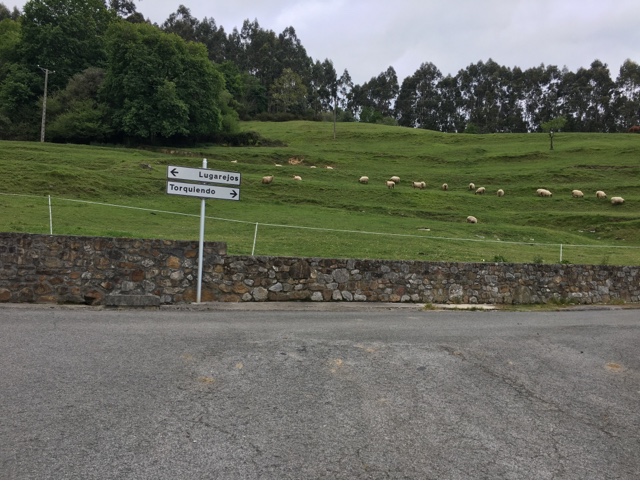 Just after the Ermita, we figured we rejoined the main Camino marked route but we also had some old arrows on the route we took.  We also caught up to two German pilgrims soon after getting back on the right trail.  Sadly, we recognised them as two we saw taking the marked trail when we left to take the Santa Cruz route.  That didn’t help our confidence.  We didn’t save any time.  The gravel trail from here though was stunning with shade tree coverage, forest walking, big vista views and farmland animals and taking their turn to entertain us.  I wish it lasted longer than the 3km that it was.  Unfortunately, it also took us back to the damn highway again. 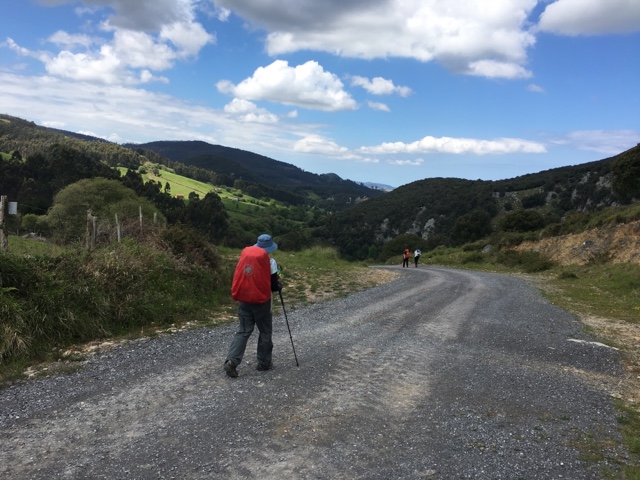 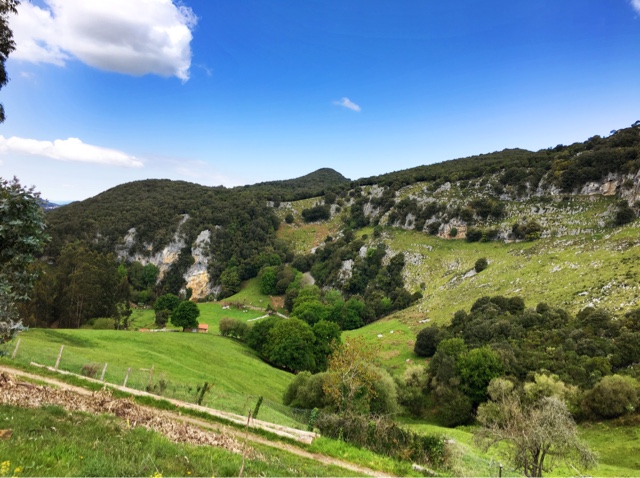 Walking along side, actually high above it and along side on it, we finally crossed underneath it and said goodbye forever.  At least until tomorrow.  We started heading north again, towards Laredo through the villages of Sopeña and Liendo.  In Liendo, we calculated that we weren’t getting to our hotel in Laredo until possible 6:00pm which is very late for us.  What to do when faced with bad news? Head to the bar!  After some nice soda and sandwiches and a bathroom break, Melanie got to talking with the boyfriend of our waitress.  He suggested not following the arrows that went and along way on busy roads and take the over the mountain option.  We were hesitant and even more so when he said – and this is a very accurate and direct quote – “just take the road behind the church.  It’s about 7km to Laredo and that should take you 40 minutes to walk”.  40 minutes to walk 7km!?!?  I can’t run that fast even with running clothes and no backpack.  He insisted and for a laugh we followed his advice. 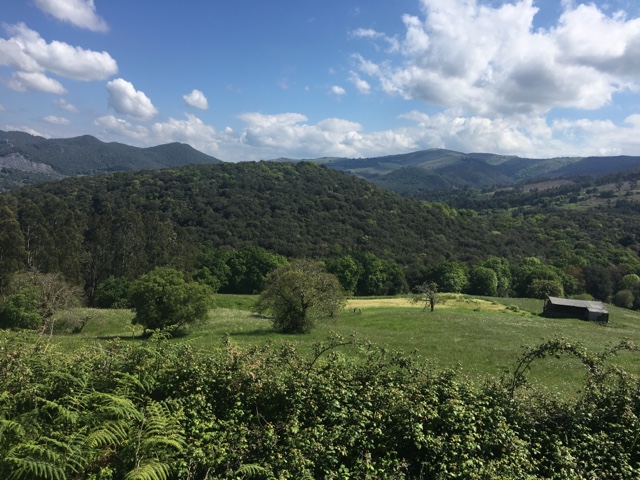 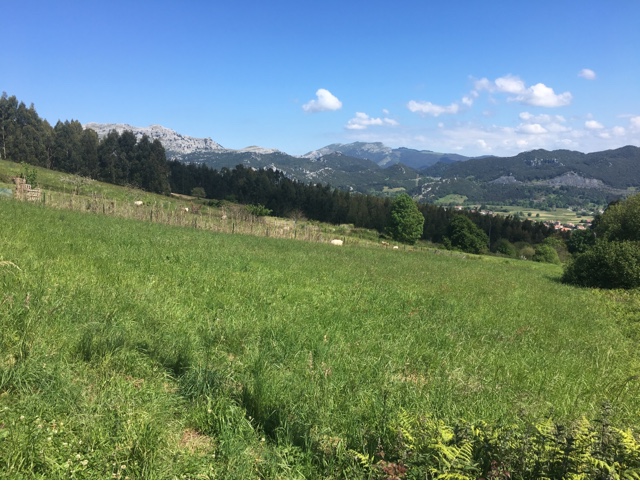 This trail was great except for a 800m section along another busy main trunk road.  We climbed for a fairly long time but were rewarded with some great views all the way up to the Lavida sign.  Those following us will probably understand that.  Once over the crest, we had new great views of the sea and Laredo down below us.  Another knee-trembling descent got us to town and a short walk to our hotel for the night, Hotel Cortijo.  We still can’t get over the sight of tents in the Castro Urdiales albergue. 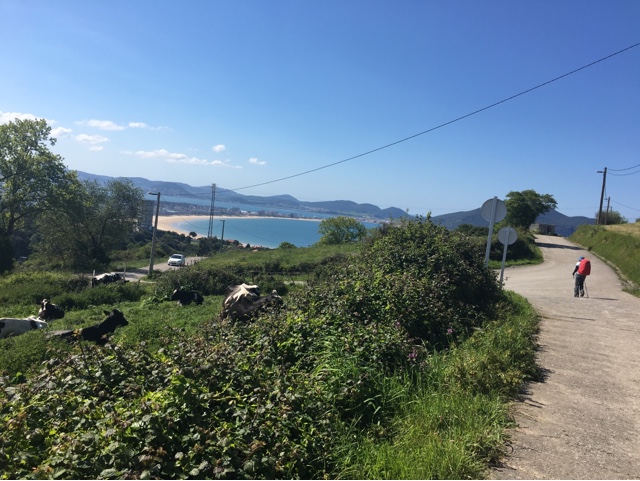 One thing that we have learned from today’s and prior ramblings, is that almost anywhere we go in Spain, there are yellow arrows.  Most of the way we went today had some form and some condition of arrows.  These may be from much older versions of the Camino, more recent but still outdated versions, variants, bar owners repainting arrows toward their bars, etc.  You could never be lost long in Spain.  Eventually you would get to a arrow pointing you to Santiago. 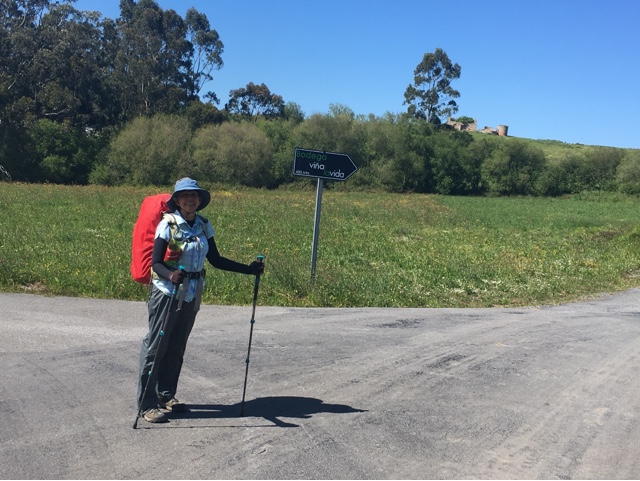 Again, it’s late so goodnight everyone.  I’m not about to proofread this so let me know if my bad typing, spellcheck or some other goblin made something unintentionally funny or useful.  Peace Y’all.