Skip to primary content
In total, today’s walk was about 17% on dirt or gravel tracks with the vast majority of the rest on very quiet country lanes.  I counted today; 11 cars passed us on the roads before we reached the final walk into Villavicoisa.  But today’s walk was a tale of two parts. 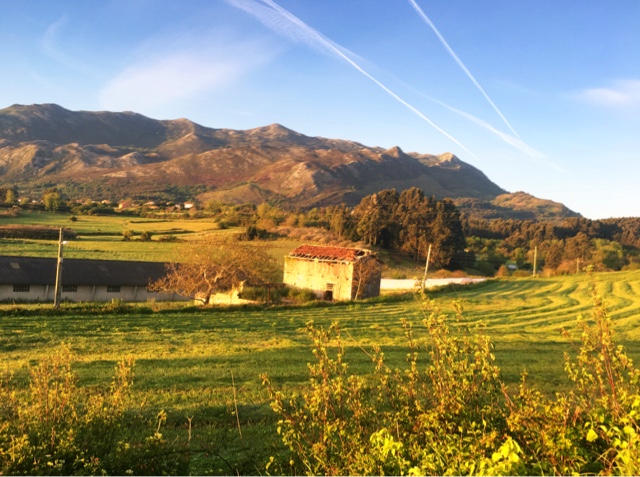 The first half of the walk was almost exclusively on those quiet rural lanes in farmland.  It was an easy walk into Colunga where, fortunately, there was a bar open.  This would be our only chance for a little breakfast and coffee / juice.  There were no cars even on that town’s roads but the few people awake on a Sunday morning at 8:30am were all in this one bar watching football and enjoying tortillas or raciónes.  As we were leaving, the Spanish woman walking with her pilgrim dog came in.  Well, the dog stayed outside but she didn’t.  It was nice to see her. 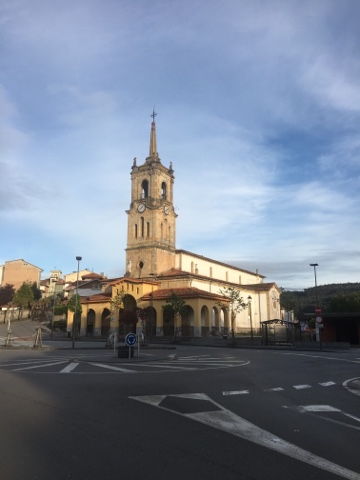 After that town there were more quiet roads and small hills but with two good steep climbs up to 200m.  About 1.5km after the hamlet of La Llera, the midpoint in today’s walk, we reached the Iglesia de San Salvador where the path changed.  It was also there that we met two young Italian boys walking to Santiago. 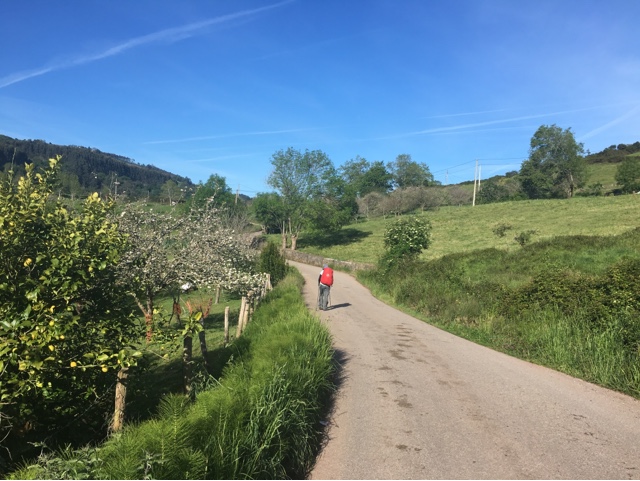 We now finally had some decent dirt and rocky trails through forest but we were also on the descent so it was harder to fully enjoy the shade and path.  Another few hundred meters of road brought us to a flatter section of dirt trails and my feet were practically dancing.  We went under the A-8 highway for the first of three times and soon passed the albergue at Sebrayu.  It looked small but modern and inviting.  From there all the way to Villavicoisa, we were fairly close to the A-8 on parallel tracks or roads.  I didn’t count those cars even if on some occasions, our path was only 10m or so from the highway. 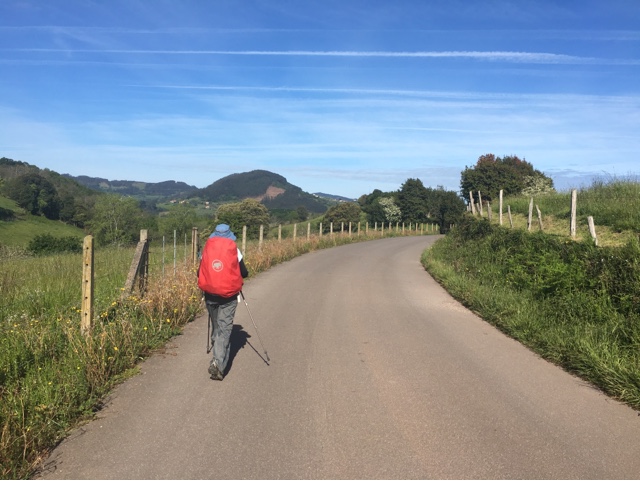 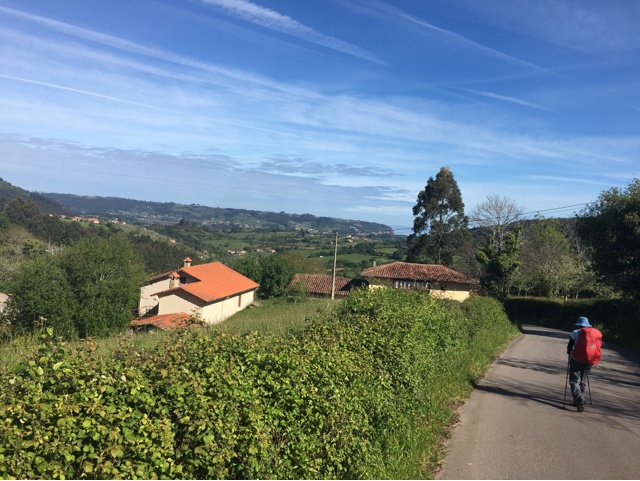 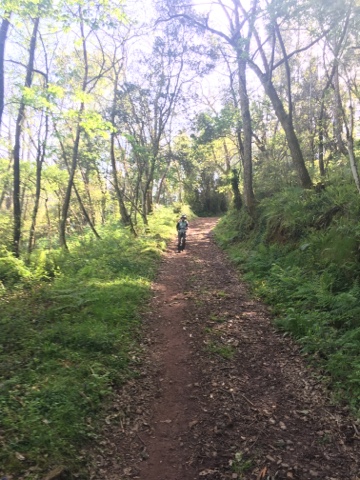 We decided that palace living was our calling so we are staying in the converted 17th century palace, now the Hotel Carlos I.  For 44€ we live like royalty.  I still had to do the laundry myself though.  The cool part is that the wet clothes are now hanging in the window, overlooking Carlos I Plaza, just behind the Spanish, EU and Asturias flags.  We are going to be in so much trouble if the king walks by. 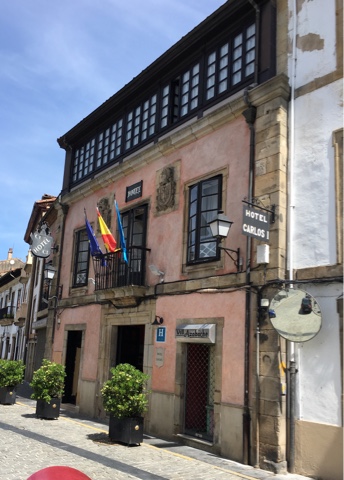 Often as I have been walking since the first day in Irun, an old song has been playing over and over in my head.  The problem is that I can only remember the chorus of the song which I learned in the folk mass that I usually attended back in the seventies.  I’ve silently sung it dozens of times every day for the past few weeks and that’s not a good thing.  You may know the song:
I cannot come to the banquet, I cannot come to the banquet,
Don’t bother me now.
I have married a wife; I have bought me a cow.
I have fields and commitments that cost a pretty sum.
Pray, hold me excused, I cannot come.
That song refers to the parable told by Jesus in the Bible about the rich man who invited all his friends to a banquet, only for them to turn him down because they didn’t want to be bothered.  Angrily, he then told his servants to go collect any people from the streets, the poor, the sinners, the tax collectors, etc., just to fill his house for the party.  The story was supposed to point out that when God calls his chosen people to him, you just can’t say “don’t bother me” because he will go call other people.  Here I am, walking a pilgrimage, and all I can remember is the bad portion of the song.  What to do?
I decided that since I can not get the tune out of my head, I could just change the lyrics.  I could tell God that “Yes! I want to be with You!”.  At least if I am singing something, it might as well be something that pleases the Lord so I came up with alternative, more positive lyrics:
I CAN come to the banquet, I CAN come to the banquet,
I’m happier now.
I have ditched the old lady; I have sold that dumb cow.
I have….
Oh wait a second… This isn’t working out right.  Let me work on it some more.
Peace y’all. 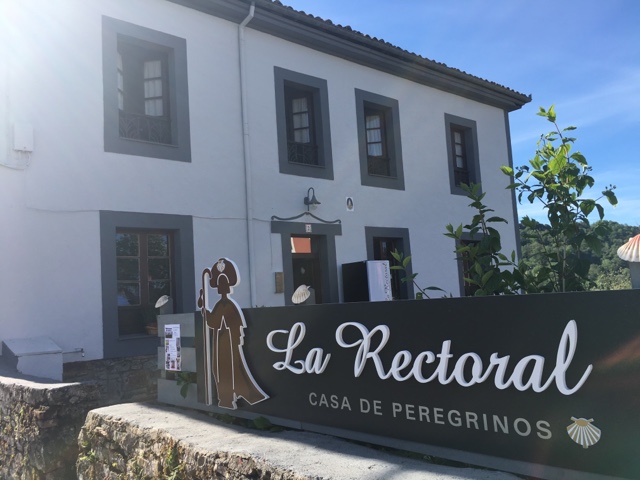 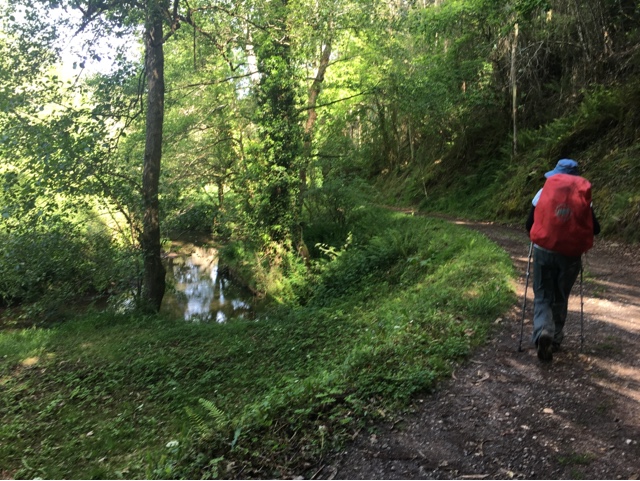 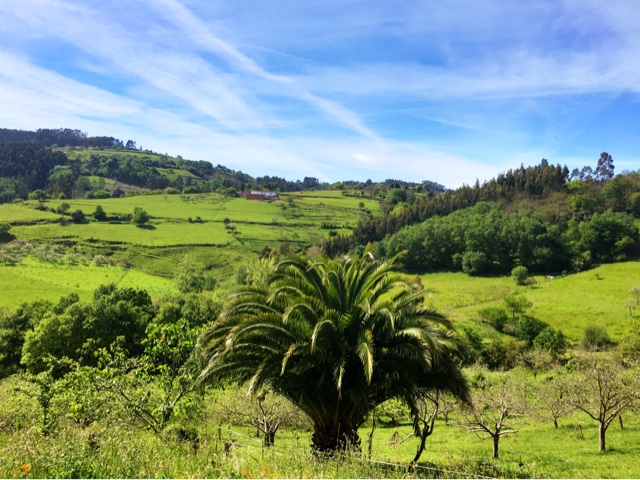 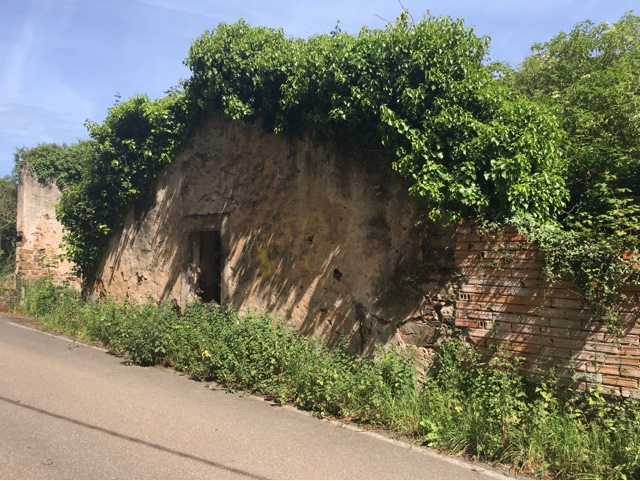 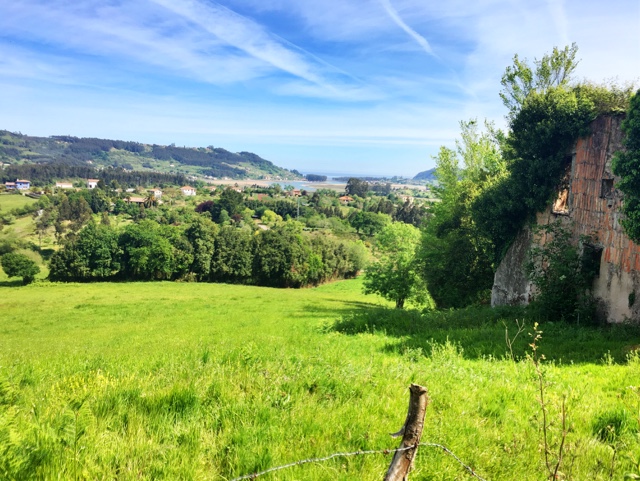 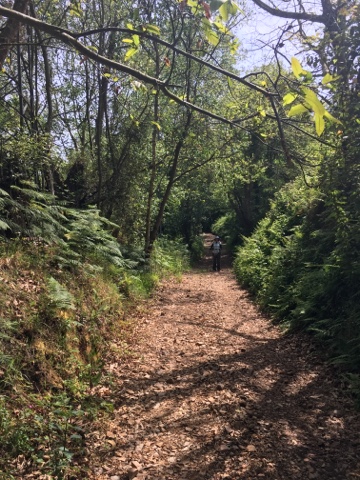