Skip to primary content
We’ve lost everyone!  Just after Villavicoisa is the village of Casquita.  That is where the Camino del Norte heads northwest to Gijon to continue along the coast and the route to Oviedo heads southwest.  I wanted to see Oviedo for a few reasons, most of which I am questioning now.  From Oviedo, we can walk north to Avilés and rejoin the del Norte, or we can start heading southwest through Lugo to reach Santiago on the Camino Primitivo.  The plan was always to make that decision in Oviedo. 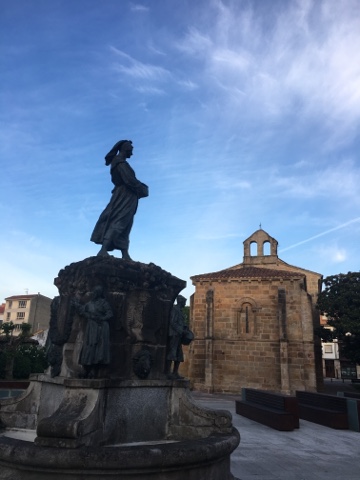 The problem is that we have now lost sight of every pilgrim we knew, and just about every pilgrim we didn’t too!  From a distance, we saw the Spanish girl with the dog leaving Villavicoisa but we believe that stayed on the Norte route.  We saw no other pilgrims while walking but the barman at La Carcabada said that he had only seen one group of five people go past his bar today, at least an hour before us.  In Pola de Siero, the only hotel in town is full for some convention and the only other place to stay is in the albergue.  As of 6:30pm, Melanie was pilgrim #2 to sign in for the day and I was the last at #3.  #1 is an Italian that is doing the Norte from San Sebastián and definitively doing the Primitivo.  We probably won’t see him again because he seems to be doing longer distances every day.  That’s life on the Camino.  We’ll make new friends in Oviedo.  If we go up to the Norte, we may meet up with people we were walking with earlier, who took an extra day in Santander or elsewhere, or walked shorter distances than we did. 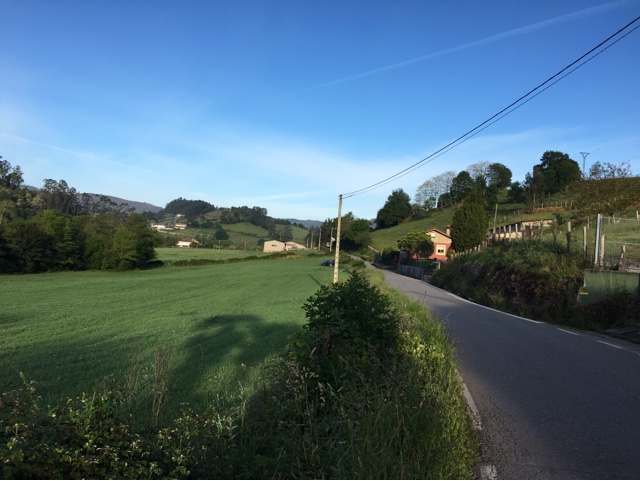 By the way, the way today was nice but not exactly always on arrows.  Melanie’s feet were giving her some trouble and the gravel and rocky tracks were what caused the most trouble.  Roads were not a problem though so it was good that much of today was on roads anyway and the parts that were not just paralleled the roads so we stayed there most of the time.  Sometimes it meant a little longer distance and sometimes a little shorter.  The GPS tracks we had from the guidebook were useless but the maps.me app was worth its weight in gold.  Fortunately, apps don’t weigh anything.  It did always let us know where the trail was likely going and how to hook up with it again. 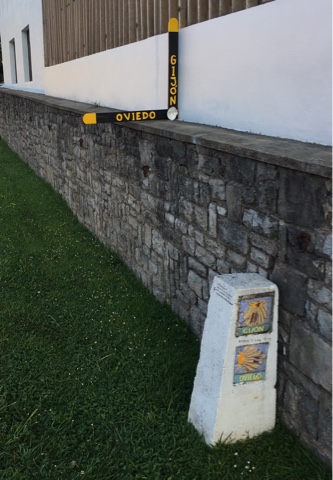 According to the guidebook, we had 550m of climbing but it did seem more.  The tallest climb was 400m but that was spread over several kilometres which meant it was not so steep.  There were lots and lots of smaller hills though. 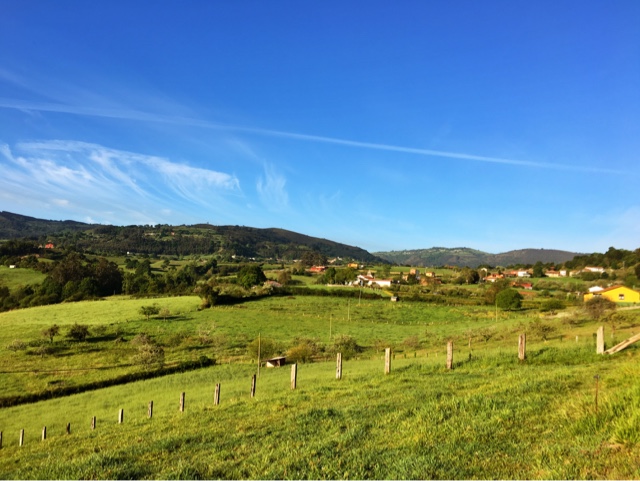 One nice touch was a man had set up a small table in La Parra with fresh, hot and (Melanie tells me) delicious coffee, cookies and water.  There was a little sign inviting walkers to partake. It wasn’t just limited to pilgrims either, at least according to the old man in the suit that walked up to the table – from his car – just as we were leaving. 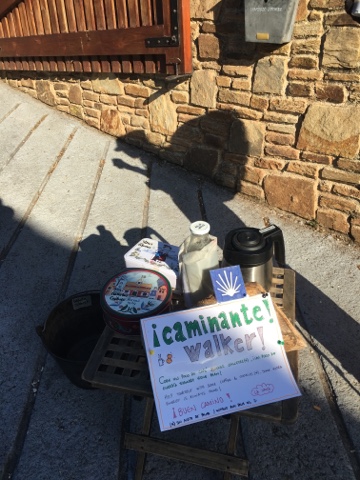 Another thing that I have to note is how well the route is marked so far, all the way from Irun.  The marking is outstanding, at least as good as on the Camino Frances and I think I now know why.  It appears that every year, friends of the Camino go out and check the route, adding or changing arrows as needed.  They must be no more than a few days in front of us though because today, we saw one of the many new stick-on arrows on a fresh bale of hay next to the roadside.  How long could that have been there? 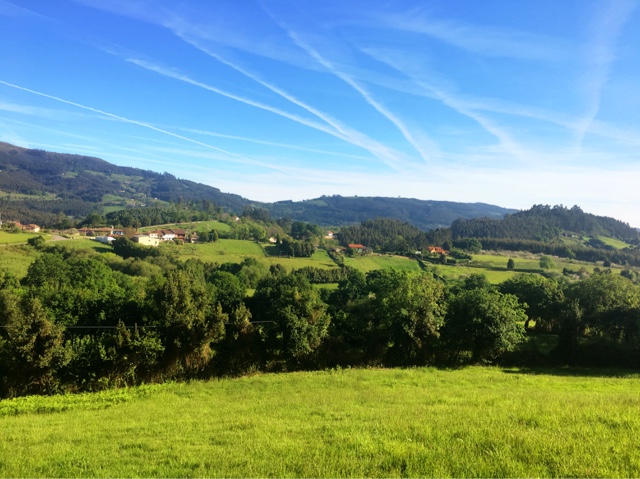 Briefly, on the route, we left Villavicoisa after having a bite in the only café in town that knows pilgrims like to start walking before 8:30am.  They open at 7:00am and are on the route around the corner from the albergue and just before the Hotel Carlos I (did I mention that this was a former palace and we stayed there for 44€?  We never did get in trouble for hanging the washing on the flagpole with the Spanish flag. :p) 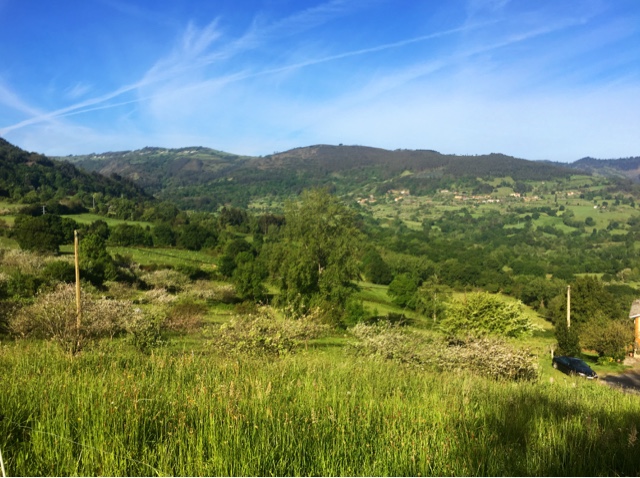 Leaving Villacoisa, we walked a bit through a nice riverside park but we were soon climbing toward the 9th century monastery at Valdediós.  That monastery was a possible detour on today’s route but we did not plan to go that way.  Unfortunately, the arrows seemed to head that way and I wasn’t sure where the real Camino was supposed to go.  My GPS tracks for the day just said “take the AS-267 trunk road southwest until you hit the A-64 highway then follow that until Pola de Siero”.  That could not be right – unless we were driving.  Now there is a thought! 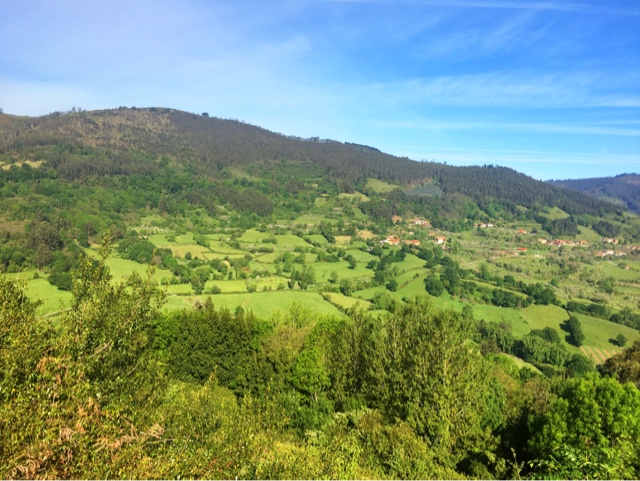 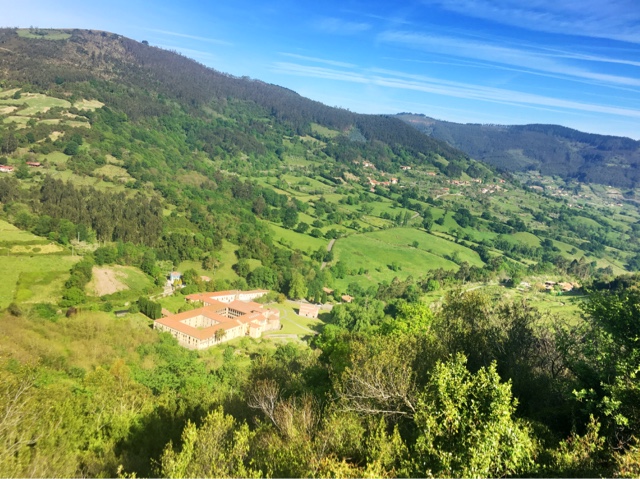 After that for us, it was over the high point for the day, then 2km down the AS-267 to Figares and a country lane to La Carcabada where we had a nice stop in the first bar available today.  It was another kilometre before the town of Vega and then a long, hot 10km on the same country road all the way to Polo de Siero.  The first half of that portion went by fast, the second, not so fast. 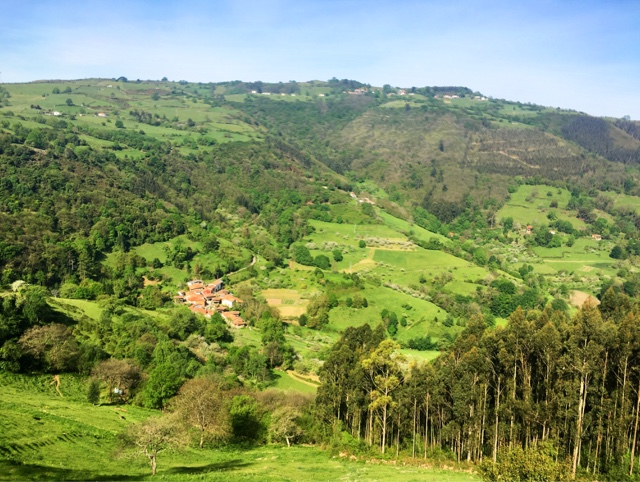 Briefly again, we tried the tourist information office in PdS to find accommodation for the night (it was closed at 2:00pm).  We tried asking some bartenders and people on the street (all knew of the small albergue but there was only one other hotel in town).  We tried the hotel (who agreed with booking.com and the receptionist we called last night, the hotel was full).  Finally, we gave up and went to the small albergue, hoping they would have room.  We were amazed to find a place that looked better than the hotel and only one other occupant. 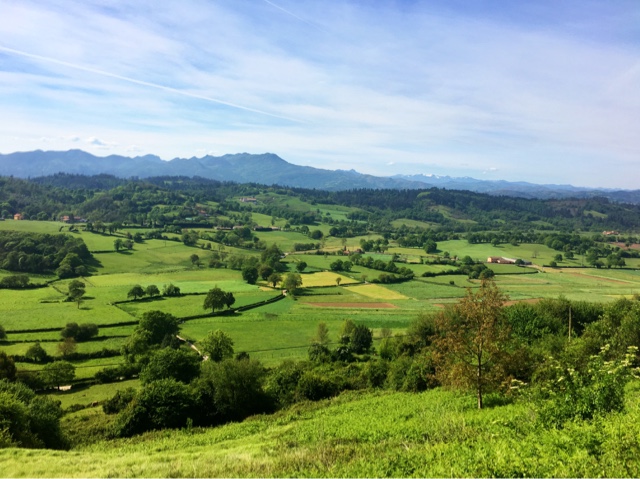 I’m rushing to finish now because everyone in the albergue just went out for a nice dinner (all three of us) and we just got back in before lights out time.  We did find one other pilgrim who arrived very late.  He must be sad that he got in too late to bath or wash his clothes.  I know, at least, we are sad. 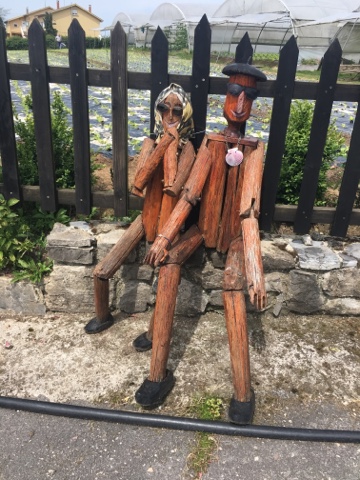 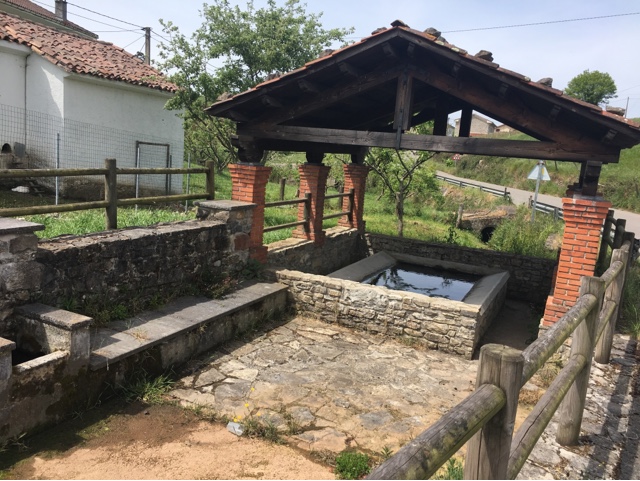