Skip to primary content
Today was a nice short, flat walk that only warranted two meal stops.  The reasons for coming here, however, seem to have all flown out the window .  The Italian from the albergue and dinner last night said he has seen Oviedo before and he had no intention of slowing down today to look left or right while passing straight through the city.  Maybe we should have followed his advice. 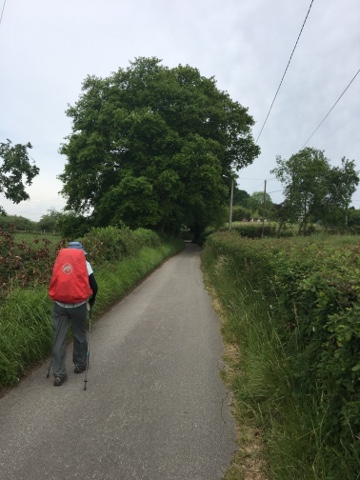 As noted, the walk was flat and mostly on roads (90%).  Any hills were better described as mounds and none took more than three minutes to climb.  The albergue in Pola de Siero was in the northwest corner of the city and I didn’t want to backtrack into the city for breakfast so we walked 3.6km to El Berrón for food.  We did stop at the first café there that we saw though.  Coffee and juice cravings can wreak havoc.
El Berrón was pretty small and the next 6km went by quickly on little country lanes but it always seemed that we were within earshot of a highway.  It was then that we finally had some gravel paths and one of the first highlights after that was a cool 17th century Palacio de Meres.  It was a massive, beautiful palace compared to those hotels we had stayed in recently.  The gate was open so I wandered onto the grounds while Melanie slowly continued to walk.  She isn’t so keen on trespassing.  Hmmmm…. there is a door open, so I just meandered over to it.  I stuck my head in and it was the palace chapel that appeared to be set up for a wedding.  The 120 chairs seemed to take up only half of the floor space, just to give you an idea of the size of just the chapel. 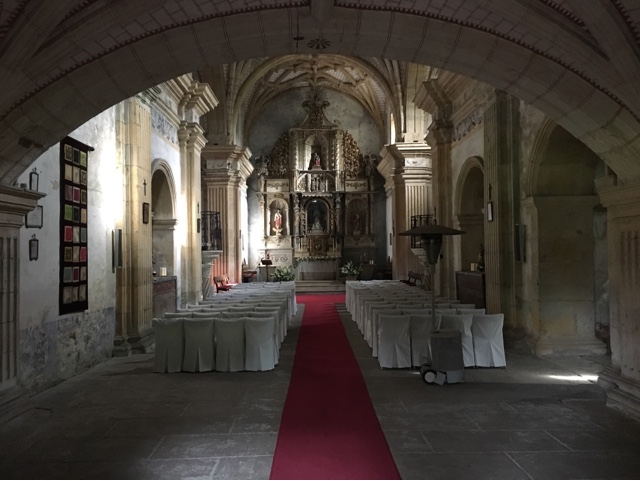 I turned around and there was a middle-aged man standing behind me near the gate and watching me.  Where did he come from?  I walked to him and explained that I had just taken a few photos but I also noticed from his dressing and demeanour that he was not a worker there, he was not the manager there, he was the owner!  He told me it was no a problem and to feel free to look around.  I ran back and got Melanie and we started poking our noses where they really shouldn’t be.  By the time we returned, the man had disappeared but we noticed a door in the wall next to the chapel grounds was open.  Of course we walked through that and now we were in the private yard of the man’s estate.  There was his wife, leaning on the Bentley, chatting on the phone as she waved to us with a confused look on her face.  I took a few more quick photos then we ran.  How was I to know that George Clooney owned a palace in Spain? 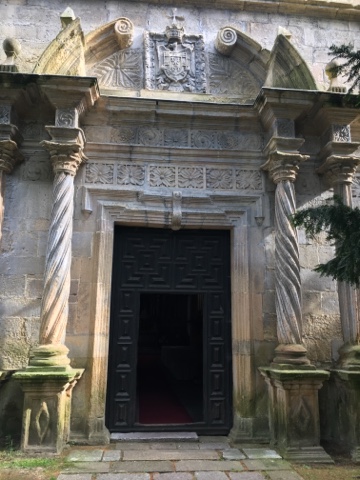 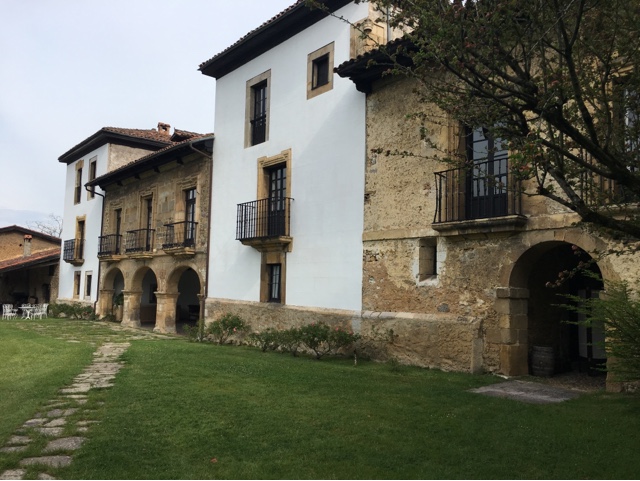 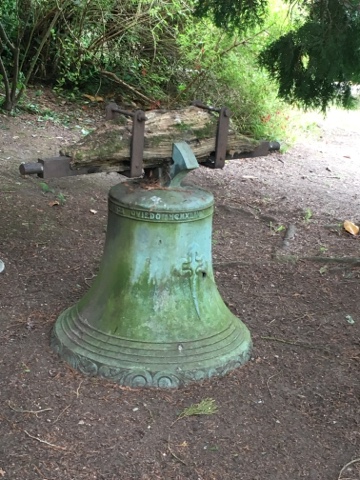 After more gravel and small rural lanes, we hit the N-634 main road to Oviedo and that was our path for the last six boring kilometres into Oviedo along suburban main street.  We did manage to cross over a medieval “Roman bridge” (they must have hung around a lot longer than history books say!) and we had our second breakfast along a stretch of the old suburban Main Street that parallel the new one just 20m away.  In there was Smelly from last night’s albergue and four other pilgrims who we saw coming from a El Berrón hotel with tiny day packs. 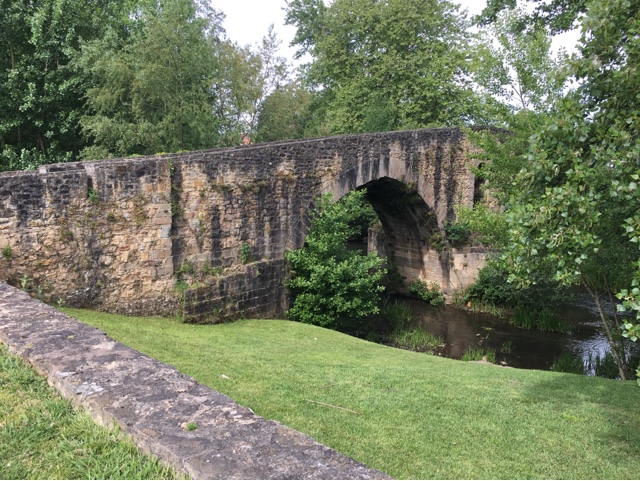 The rest of the walk passed by every car dealership that sells cars in Europe.  By the time we got to Volvo, we seriously considered asking for a test drive and we were going to drive to our hotel then tell the salesman, we didn’t like the car and we were letting him drive it back alone.  Big cities aren’t really know for their lovely walks into and out of the city.  We survived this one though.  It started to drip rain as we got close so the last kilometre was our fastest of the day.  I didn’t want to breakout the raincoats.
We are staying in the Hotel Vetusta, right on the Camino route and at 39€, it’s a bargain.  The room is small and we found the bathroom which was located inside a closet.  It is so small that i can only shower half my body at a time.  I had to open the door to get room for my arm when I needed to wipe my arse.  Melanie and I can’t keep both our toothbrushes on the sink as there is only room for one.  Did I mention it was small?
We met a lovely couple from Chile in the laundromat and we’re now headed out for sightseeing, smelling like roses.  I feel like walking over the albergue and mentioning the laundromat to our new pilgrim friend.
Okay, hold the press.  I figured out why I am here again.  I have heard a saying before but I could not remember exactly how it went but it was something like “Why go to Santiago to see the Apostle.  Come to Oviedo to see the Lord”.  I always thought that it referred to the largest piece of the True Cross being here.  I learned last week that I was wrong and legend has it that that particular relic is in the Monastery of Santo Toribio de Liébana.  When I mentioned this to Jean-Claude, he said that it was the Holy Grail that is in Oviedo.  Research yesterday proved that wrong too.  Many people believe that the Holy Grail is in Valencia.  What is it that I should see here?  Why am I here?
Just when we were leaving to do a little sightseeing, I remembered that I had to translate some graffiti that I saw today.  I understood most of it but didn’t know a key word and some of it also needed a closer look to read.  It says “Quien va a Santiago y no a S. Salvador visita al siervo y no deja al Señor”.  Roughly translated, and an alternative version of this saying is ‘Those who go to Santiago and not to Salvador (Oviedo), visit the servant (St James Apostle) and not the Lord (Jesus Christ)’.  That’s what I was trying to remember!  Thank God for a little bit of all the graffiti we see here! 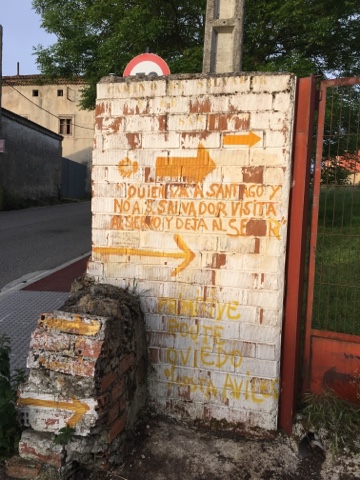 With that saying in mind, I searched the internet and found that the San Salvador Basilica here contains a holy chamber containing ancient relics of the early church.  Most notable is the Sudarium, the cloth that legend says was wrapped around Christ’s head when he was buried.  That’s why I am here!  We took a tour of the beautiful basilica and spent most of the time in the Camaraderie Santa, in awe of the relics.
I’m at peace.  Peace to you all. 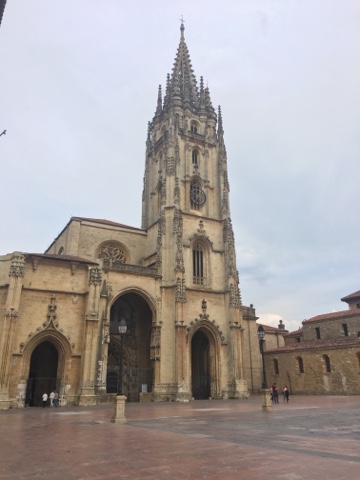 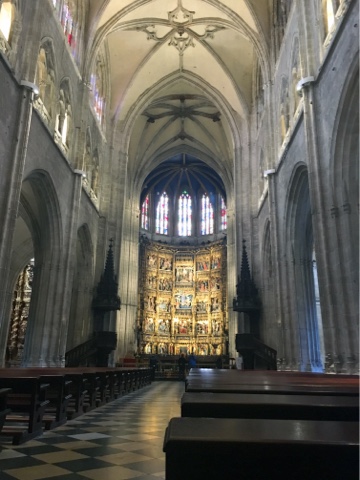 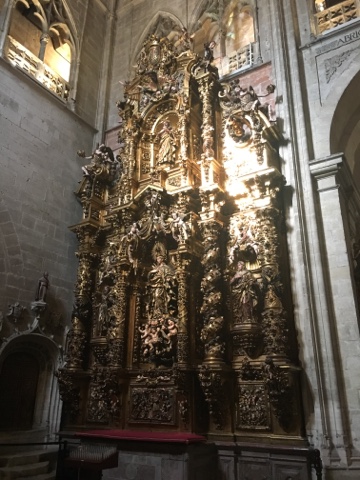 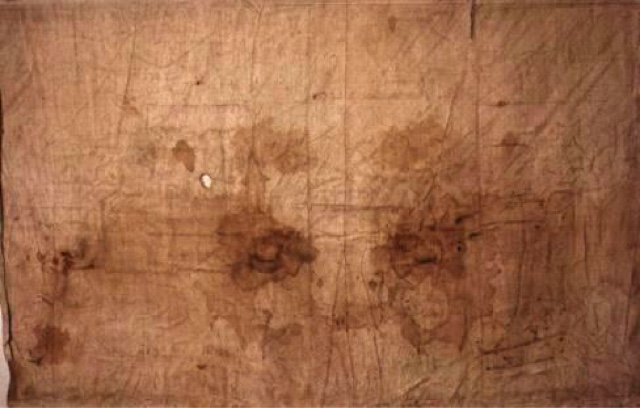 This photo was “borrowed” from Wikipedia. 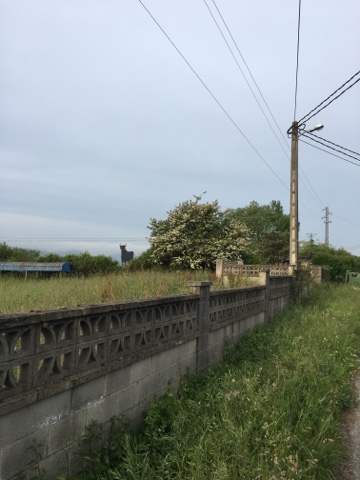 I thought we saw that bull in Navarrete. 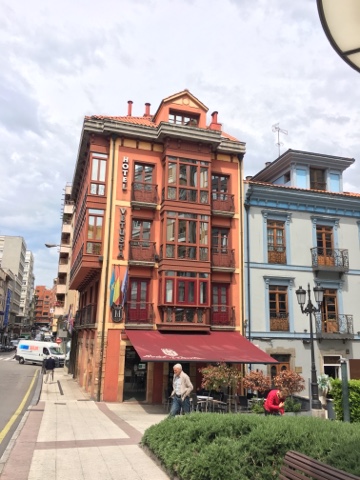 Our hotel. Our room is on the third story (that’s the fourth floor to my American friends), right side balcony.  You can’t see any clothes drying in the window today! 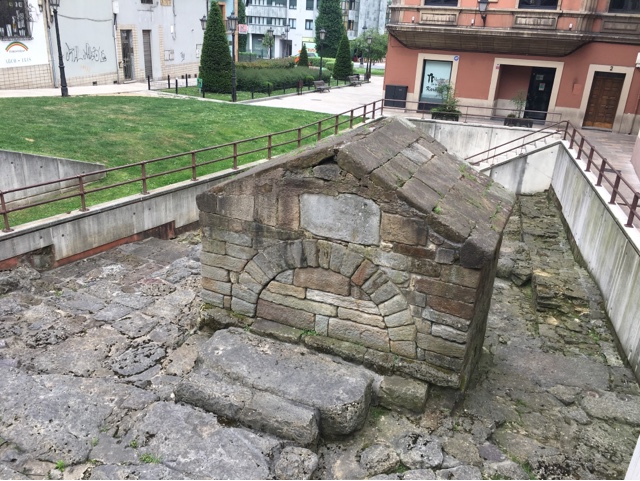