Skip to primary content
Everyone packed up this morning and crammed almost everything into the cars.  Like the others, we have left one bag behind with things that we do not need (like trekking gear) for the next week.  Our entourage seems to have grown some for the 240km drive to Tsomoriri Lake.  One of the new crew is the most important.  He is the eye doctor who will be seeing the nomads.  He is pretty much the reason for our trip.
Another addition to the cars is Justin.  It sure is getting crowded!  We had stopped for tea at the house of a friend of Khandro-la’s on the way to the lake.  Justin decided that travelling in the cold mountains of India by bike wasn’t nearly as much fun as he thought so he left the rented bike with the family and he plans to pick it up again on the way back to Leh after the week in Tsomoriri.  BTW, somewhere along the line, Kanya and Justin seem to have become a couple.  I haven’t a clue whether Andreas is heartbroken or relieved.

We are staying in the lake-side town of Korzak at the Nomadic Life Tent Camp.  At an altitude of 4,500m, we are sucking wind for oxygen and it is pretty cold when the sun is hidden.  I’m worried about what it will be like tonight.  If you missed the meaning of the name of where we are staying, let me repeat that we are staying in tents – large army tents but tents none the less.  They are big enough for four cots, and a little walking space around the beds.  As we have the whole tent to ourselves (pure luxury!), we use the free bunks to keep our clothes off the cold ground.  There is a groundsheet built into the tent but who knows if moisture will get in.  The outhouses are not too far from our tent so Melanie’s mad dashes in the middle of the freezing nights may be tolerable.  The shower shacks are a bit further away but I am not sure how that will work.  The water is apparently ice cold and is never more than a trickle.  We are told that water could be boiled for us to use for a sponge bath but that sounds like trouble.  Coming from Singapore, Melanie and I are used to a mandatory shower at least once a day, if not twice.  We won’t be sweating like at home though so we will see.
We got to walk around the small village after we settled in and learned the camp rules.  The villagers look genuinely happy that we are there.  We understand that they rarely get to see a doctor but we don’t really appreciate what that means to them. 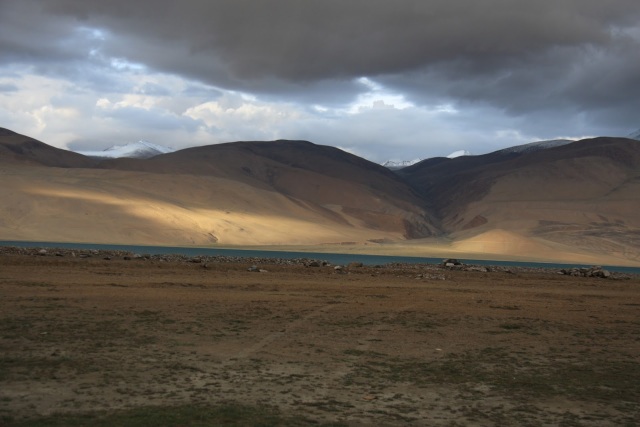 Before bed, we had a late dinner in the mess tent of the camp but this turned out to be a strange drama that was a bit unsettling.  Just as we sat down for dinner, we were told that we had been summoned by Khandro-la.  The hot food was on the table, glasses filled with water, all we had to do was dish it out and eat.  What’s up with this?  Let’s just eat quickly and go?  No, demanded Ani-la.  Khandro-la specifically said we needed to go to her before food was served.  There was a lot of grumbling as we were all hungry.  We didn’t have much food on the road and this was our big meal of the day that also needed to keep us warn tonight.  The reason for her beckoning better be good.
Khandro-la and some of her crew are staying in the monastery in the small village which sits above the floodplain where our tents are.  It looks a little more comfortable than our tents.  Royalty has its privileges, I guess.  We did the 15 minute climb up the hill by torchlight and through the monastery to find Khandro-la.  After we got to a small reception room, she instructed us to sit on the chairs and floor around her.  She said that she had two serious things to talk to us about.  Her demeanor seemed very different from the first part of the trip so far.  She appeared angry.  What had we done?  Well, first, she lectured us for a while about the fact that she was running the eye camp and it was ONLY her project.  She emphasized that things worked differently in Ladakh and we were not it let our Western bias interrupt proceedings.  She apparently had Australian doctors help in prior years and she had a lot of problems getting them to do things her way.  She wasn’t more specific but she was very emphatic that she would not tolerate any Western influences.  I am not sure what she means but I’ll keep that in mind!  So far though, I was reminded that she wasn’t as bothered by our Western money.  Second, Khandro-la also complained that she was very disappointed that we had not already learnt her prayer that she wanted us to memorize and recite before every meal.  Groan.  We got to practice it several times this evening before we were dismissed.  Dinner was worth the worthless wait but I did feel sorry for the woman who ran the camp.  She had to keep back the food, reheat it and stay up about 90 minutes later than she would normally have just to clean up after us.  That angers me and I wonder if I am letting my “Western bias” influence me.  No, I think it is more of my Jesuit training that makes me upset that we are causing trouble for someone else.  Are Jesuit’s Western?