Skip to primary content
Our trip didn’t get off to the best of starts because of a collection of minor problems but we have arrived in Manchester on Monday morning.  At times, I wondered if we would make it, at least without me blowing my cool.
The one major issue was that I didn’t allow for enough time to transfer flights in Heathrow.  I don’t remember why I booked a flight to Manchester with only a layover of two hours but that clearly was not the best choice.  We raced to the immigration, baggage claim and customs only to find we had a 15 minute walk to get to a train that would take us from Terminal 2 to Terminal 5.  That train only runs every 20-30 minutes too.  By the time we got to the British Airways check-in desks, we had 1 hour and 7 minutes before departure and there were 120 people in front of us in the queue.  We asked for help from the ground staff and they directed us to another desk where we managed to get boarding passes with seconds to spare.  We had a bag to drop off at the odd size desk at the end of the terminal then we ran back into some of the most thorough security checks I have been subjected to.  Despite all that, not only did we get to the gate 7 minutes before boarding but our bags also made it on the plane.  We were either blessed, extremely lucky or both.
Once in Manchester, we took a £5 train ride into town but the queue to buy the tickets was longer than the train ride itself.  When we got to Piccadilly Station, we checked maps.me and figured that our hotel was only 750m away.  I call that walking distance even when carrying an extra duffel bag of gear.  The sky was overcast but it didn’t look like rain so we set off, following the maps.me directions.  After the first 100m, I found out that I am a terrible weather forecaster. It started to pour.  We quickly found shelter under a rail viaduct but not fast enough.  Our clothes and bags were soaked.  We put rain covers on the packs and better weatherproofed ourselves but it was too late.  The rain had already stopped so we started walking again.  50m later, we were running for cover again.  The rain was whipped sideways from the wind.  We got more soaked. After one more five minute break in a car park, we finally arrived at the Hotel Ibis.  I would have been happy even if it was the Bates Motel, we cleaned up, dried out and rested from the 20+ hours door to door red-eye flight and local travel.
By the way, one benefit of our hops from shelter to shelter from the on again, off again rain was when one of our stops ended up right next to a statue of my good friend, Archimedes.  This statue depicted him during the eureka moment as he climbed into a bathtub and solved not only a kings counterfeit crown dilemma but he also helped scuba divers 2,200 years later pass their dive master exam. 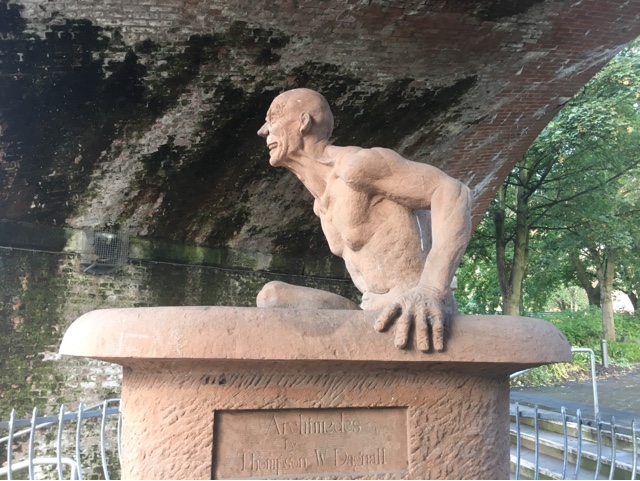 After our rest, we had lunch at a local pub, took a bus out to Old Trafford to sort out tickets to the Manchester United vs Crystal Palace game when we return at month end, got some money from the ATM and did a little gear shopping. Prices here are much better than Singapore and better than the US for many things too.
One story from yesterday that I am less happy about occurred at lunch.  We had some pizza and a beer at a nice local pub. The guy who served us was helpful and very pleasant. He deserved a tip.  As it was though, I had brought at least a kilo of change from our last visit to the UK 18 years ago.  I pulled out a bunch of the 50p coins and left them for the barkeep.  Later, when paying for the bus to Old Trafford, we found out that many of the coins we had, including the massive 50p ones, were no longer legal tender.  We went back to the pub to exchange coins with the barkeep but he already went home for the day.
We spent much of this morning trying to find a bank or post office that would exchange the old coins for us but without a local bank account, it proved impossible.  We went back to the pub and begged forgiveness from the barkeep and offered to buy back the old coins from him.  It turns out that he collects coins and was quite happy to have been given them.  It was his lucky day then because we then dumped out a coin purse for him, full of the old 50p, 20p, 10p and unwanted 5p, 2p and 1p coins.  There was probably only £10 there but as a tip for a £20 meal, that’s not too bad.  He offered to give us credit at the pub for it but we were happy to get rid of the weight.
We did a lot more walking around the city today and that included a recce to find a good place to watch tonight’s Manchester United vs Basel Champions League game.  The best spot seemed to be an Irish pub where we had brunch today but then we found out that Celtic also play tonight.  Forget that.  We’re Jeanine out now to find a place more friendly to ManU supporters with our game on all the televisions.
Another thing we have found out about this place is that Manchester has a tremendous number of truly beautiful old buildings throughout the city. Whether tiny or massive they stand very proud of their history, which we all know is far better than Liverpool’s. 😀
We are still fighting jet lag but that’s one of the reasons we have been walking around outside so much today.  Tomorrow morning we’ll take a train up to St. Bees and Thursday will be our first walking day.  Oh boy! 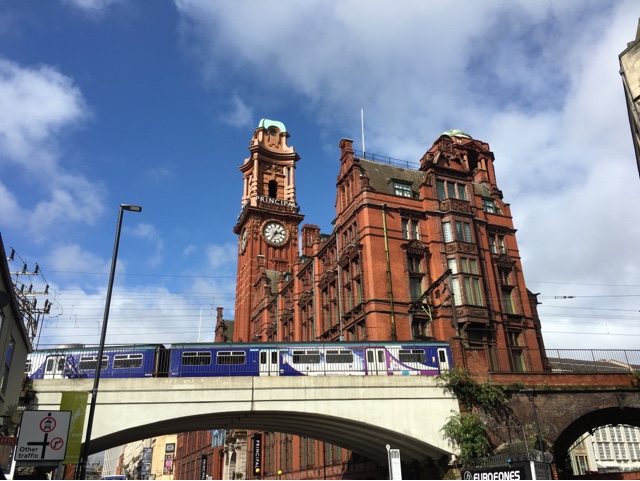 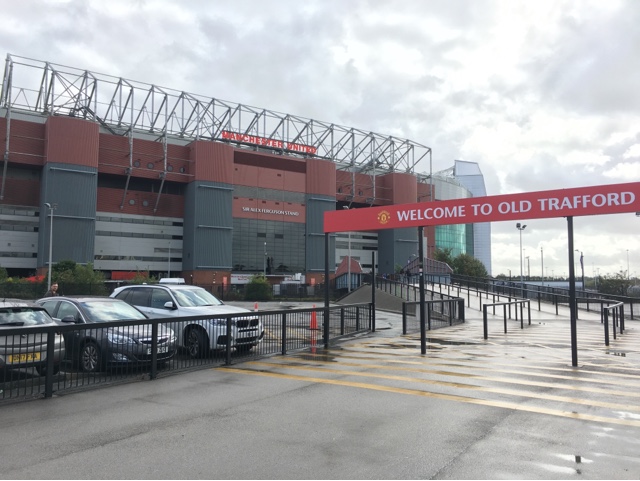 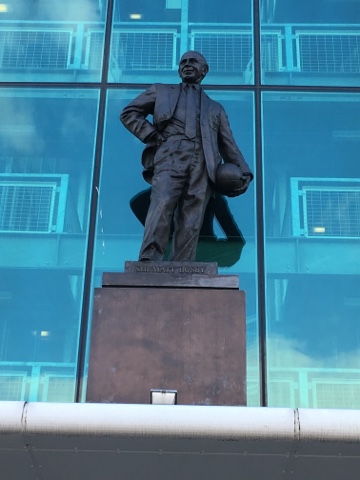 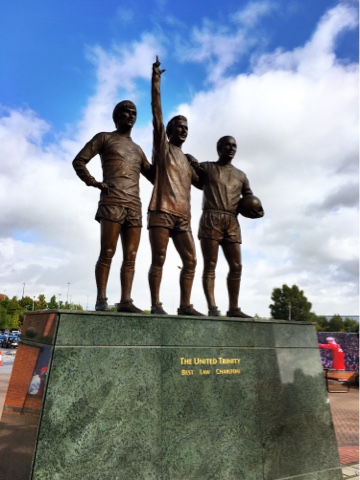 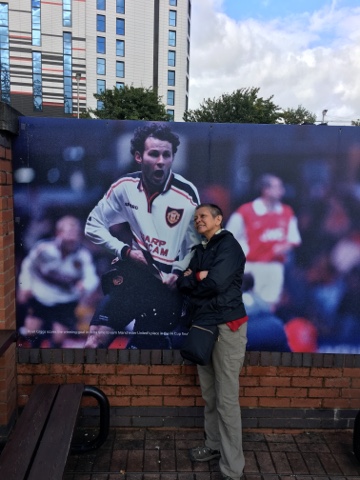 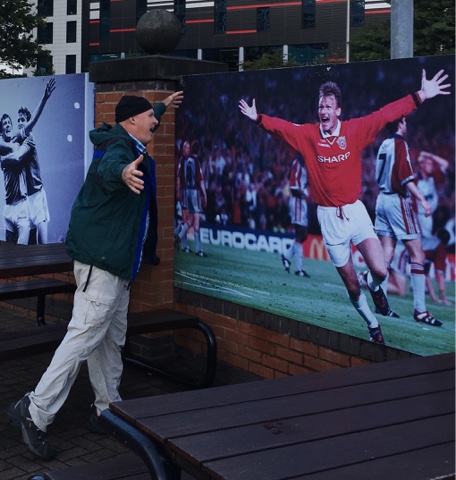