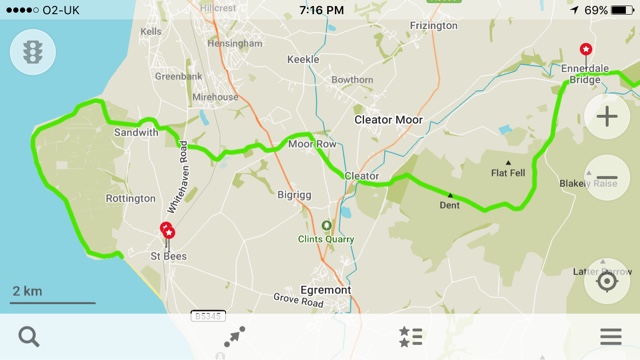 The forecast was, as expected, for rain all day.  When we looked out the window over the train station, as we dressed this morning, we were slightly optimistic that the low, dark and foreboding sky wasn’t yet producing rain.  We were less optimistic when stepping outside for the start out our walk. A drizzle started before we even made it out of the gate.  We quickly grabbed the raincoats but the drizzle stopped before we could put them on so we just carried them for a few kilometres.  Someone smiled down on us though as the rest of the day we was nearly perfect walking weather. A good quarter of the walk was even sunny though still cool.  The balance was overcast but we rarely worried about rain, except at the very beginning and just before the biggest climb.  It was very windy, particularly on the coast and on top of Dent Fell. 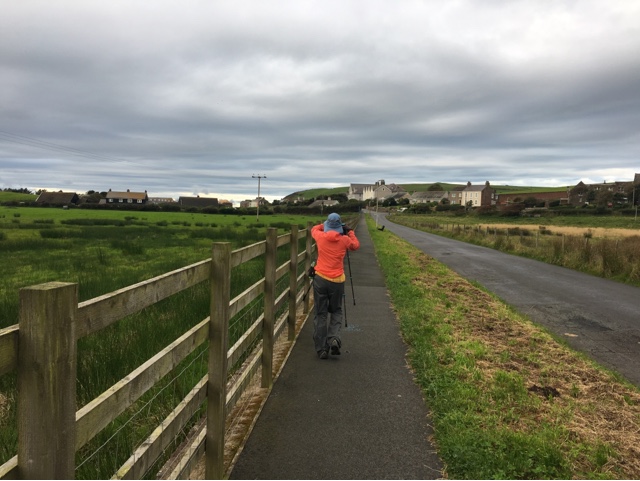 We started with a 800m walk to the sea to reach the official starting point of the Wainwright Coast to Coast walk.  Tradition said that we needed to dip our toes into the Irish Sea so we carefully did that.  A newer tradition said that we needed to pick up a pebble from the shore to the drop onto Robin Hood’s Bay in the North Sea at the end of the walk. I was less enamoured with this tradition but Melanie found a small pebble and promptly put it in my backpack for me to carry so I was participating in this whether I wanted to or not. 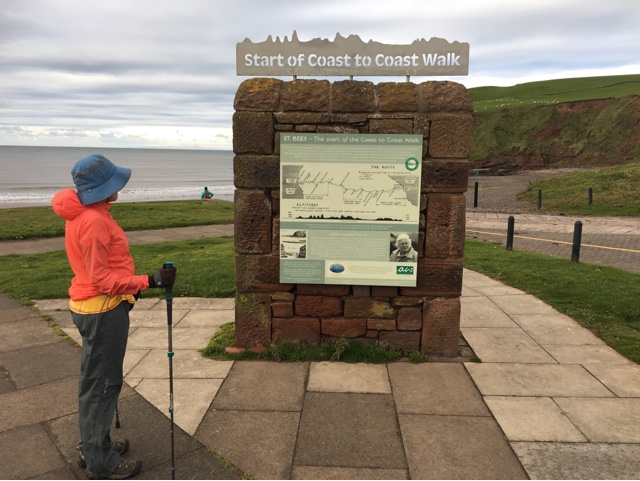 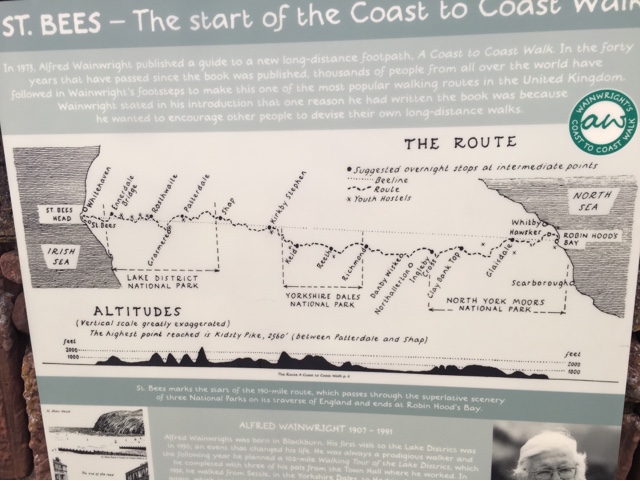 One couple was just leaving as we arrived and their parents were there to see them off.  Sadly, the folks didn’t wait to wave to us.  We also met a young man from Maine and we took his photograph for him with feet in the sea after he took ours. We walked with him for a bit today but he walks faster than we do and takes many breaks. We will likely see Maine again though, further down the way.

After doing the rituals, and putting on more clothing to fight the cold and wind, we walked along the cliff overlooking the coast for about 6km before heading inland.  The path was sometimes a little too close to the 100m cliff edge and sometimes sandwiched between thorn-bushes and a barbed-wire fence but it wasn’t too bad at all.  The wind was fierce but constant so you could lean into it without worry of falling if it suddenly hit a lull.  When we turned inland, it was strange (and premature, it turns out) to say goodbye to the sea view. In April we walked half of the coastline of northern Spain and we almost always could see the sea.  We had only walked a quarter of one day’s route now before waving goodbye to the waves. 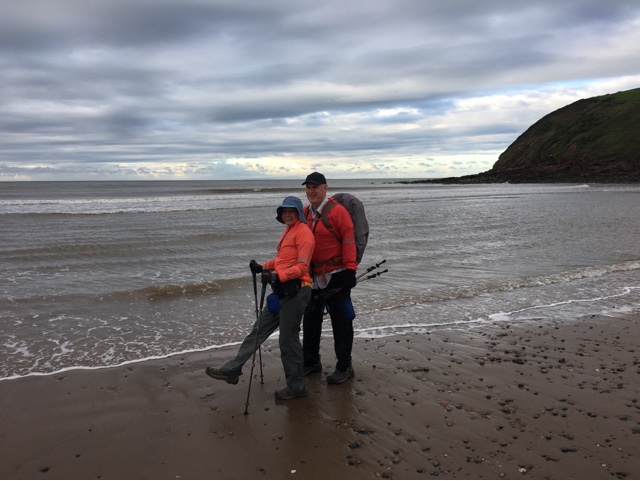 Walking inland, we were joined again by Maine along with an older Australian.  Aussie proved useful because this is his third Coast to Coast walk and he knew the way without referring to guidebooks or GPS. He also helped us cross our first boggy field.  Unfortunately, he was ahead of us a one point where we followed our GPS trail along an old rail bed, converted to a hiking and biking trail.  It turned out that this was an older route (now an alternative trail) and he must have taken the newer route.  We never saw him again and we passed the town, Moor Row, where he was stopping for the day.  He is walking shorter stages so we likely will not meet him again. 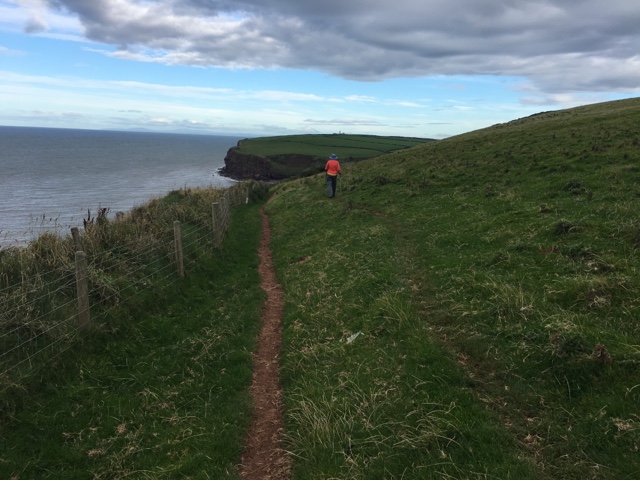 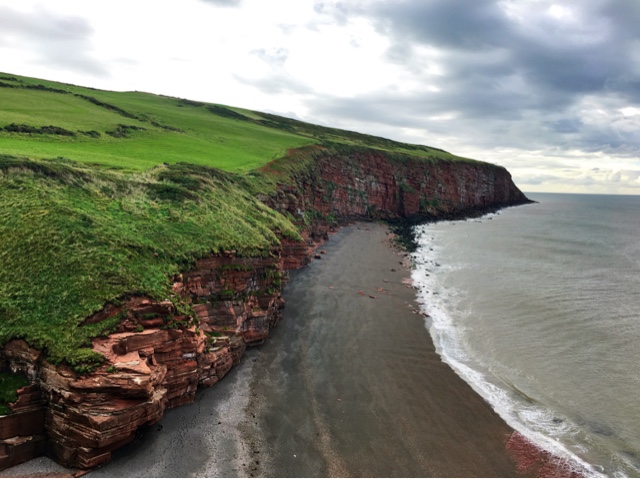 We had a short but muddy walk then southeast to the town of Cleator where we looked for a café or pub for a drink and a toilet break.  Unfortunately, we were told that it would be adding 1.5km to our total today to reach the closest pub and return  so we just bought some cookies in the family store next to the trail and planned on a later forest pee stop.

Today’s challenge was a walk up to the 350m Dent Fell.  It was a fairly steep but constant climb but extremely rewarding.  At the top, after walking among the sheep, we turned around and could see not just the Irish Sea again but all the way out to the Isle of Man and along the coastline from well south of St. Bees to many miles north of Whitehaven.  We the more mountainous interior north and east of us was also adding to the stunning 360 degree views. 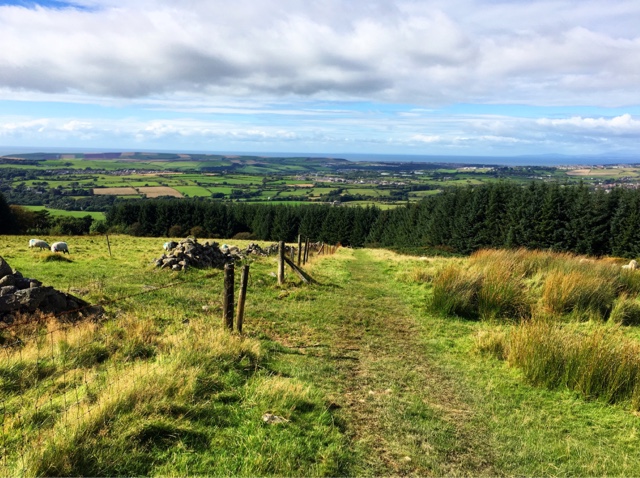 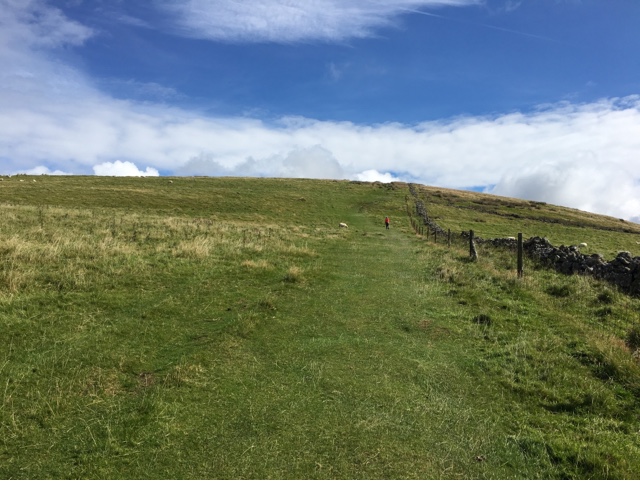 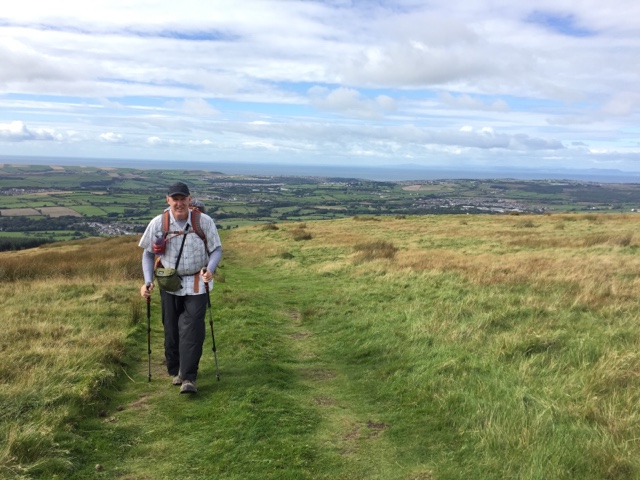 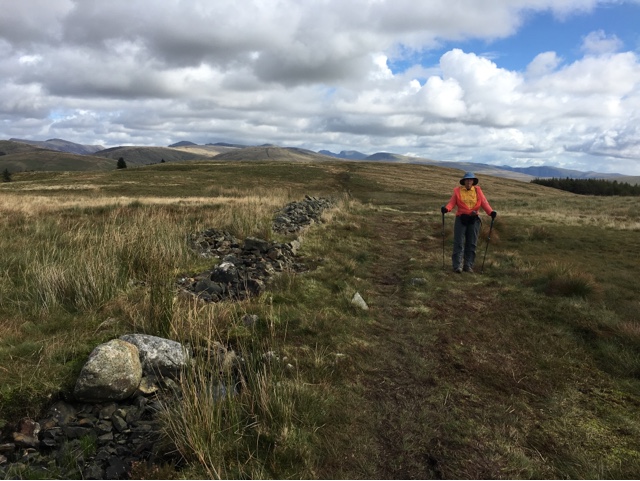 A bigger challenge was getting through the bogs and mud on the flat summit and getting down the much steeper eastern side of the fell.  We worked our way down to Nannycatch Gate (I did not make up that name) and much of the rest of the day was spent either walking through serious mud, up or down trails that resembled shallow streams or crossing deeper streams on rocking rocks that only half the time were above the waterline.  This was fairly leisurely though which was perfect for us.  Both or legs were jelly and wobbly from the steep descent of the fell. 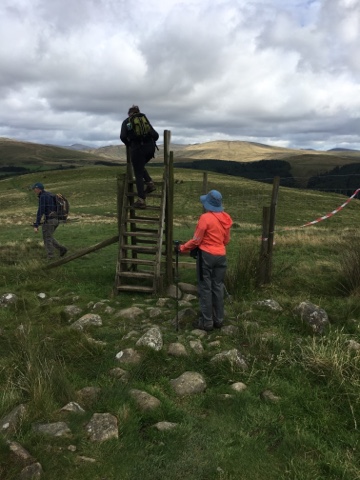 We made it though, all the way to Ennerdale Bridge and the welcoming Shepherds Arms Inn.  It’s a lovely mishmash of rooms in an old building that probably welcomed guests for a few hundred years. The only problems is that wi-fi must have been installed a few hundred years ago too .  It is slower that molasses in January and only reaches from the front desk to the sofa facing the front desk across the room.