“Discretion is the better part of valour” just describes the choice between failure and stupidity. ~Benjamin A. Franklin 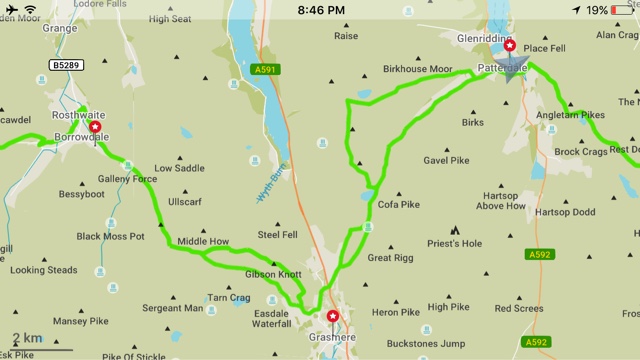 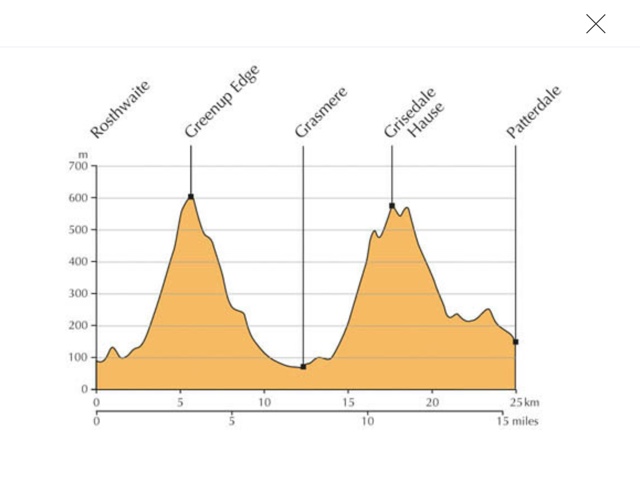 We had no idea what the weather forecast was for today.  The guy who ran our B&B was not exactly tuned into the world outside of his house.  In fact, we are still waiting for the rest of our breakfast but that is just a gripe.  By the time we headed off today, it was 8:45am.  We had the altitude graph from the guide book (I looked!) which looked a bit hairy with two somewhat steep 500m climbs but only about 24kms, which is fine with us… or so we thought. 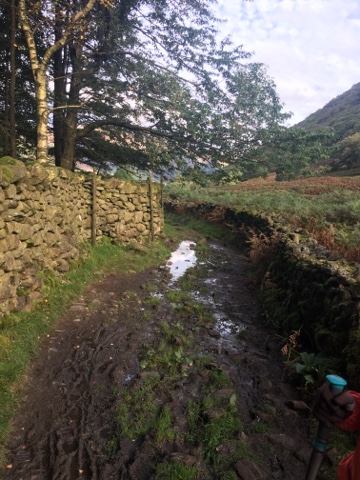 The trail today started on a level rocky bridle path along a river that wasn’t difficult as long as we watched where we put our feet.  I’m not sure how horses do it but that turned out to be a theme for the day.  Eventually the trail got steeper and steeper until the final 90m to the summit when we were almost using both hands and feet to climb.  After yesterday’s climb, we were physically prepared for today’s climb but it was a little disheartening to get to the “peak” only to find that we had another 50m up to go, picking our way through a very boggy hillside. 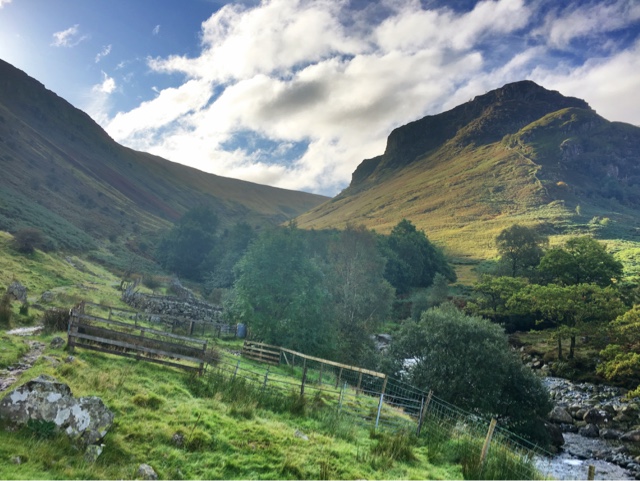 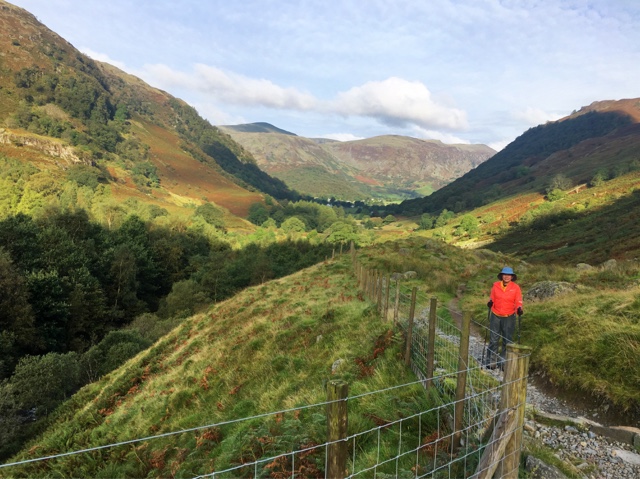 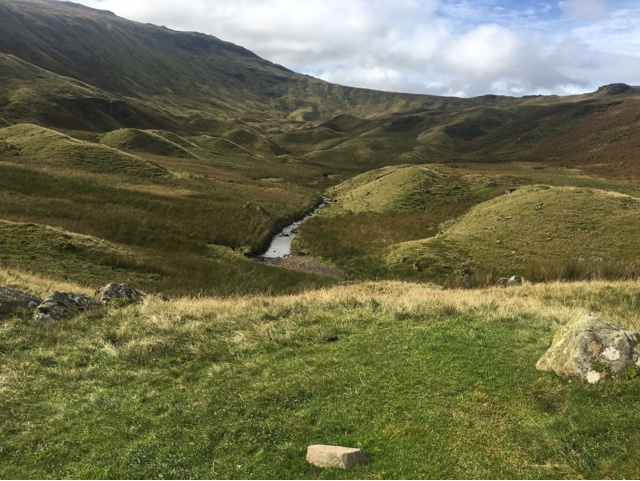 When we finally got to the gatepost that signified we would be descending from the first of the climbs, we quietly congratulated each other with a kiss but also admired the valley below us.  It was massive, steeply dropping and revealing a rocky river as the designated trail.  Every step, all the way down, had to be carefully chosen or we would slip on a rock, twist an ankle or knee, fall, step into shin-deep mud or water, etc. Lots of walkers passed us as they seemed more accomplished at this type of walking.  The majority were much younger than we are but not all. 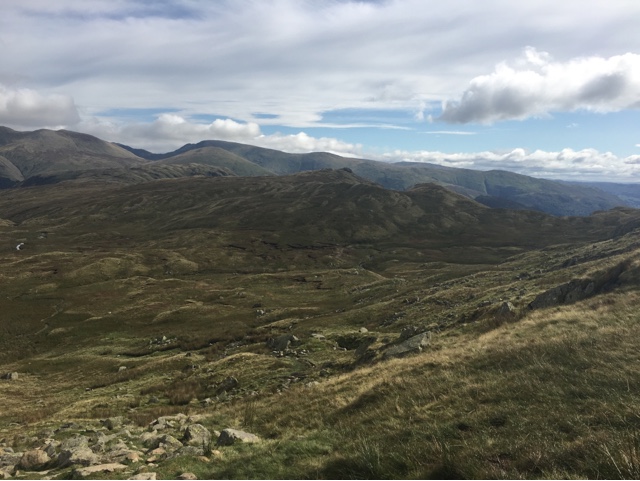 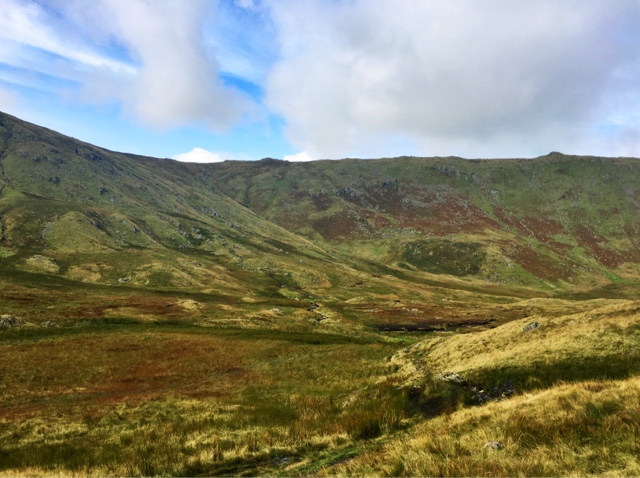 By the time we got to the bottom of that first climb, we calculated that it took us almost five hours to cover just 10km!  Assuming that the next climb was somewhat similar to the first one, we weren’t going to reach Patterdale until, at least 7pm or 8pm!  It was at that point that I called a time out.  I checked to see if we could just walk along a more level road or trail.  Nope.  The alternative was along a busy, very narrow road that was 21km long.  What to do?  We looked up into the mountains and could see that it was already raining there. 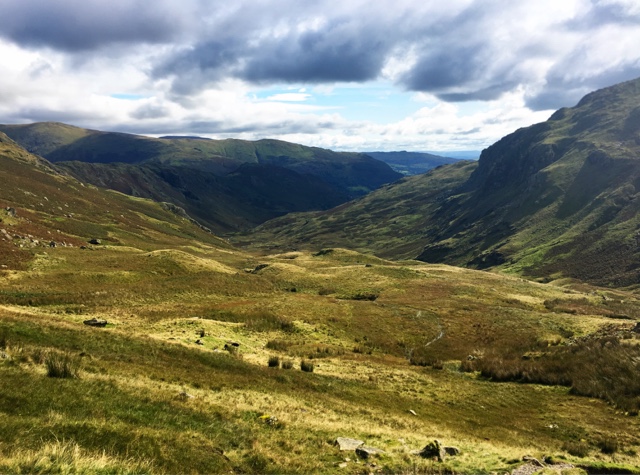 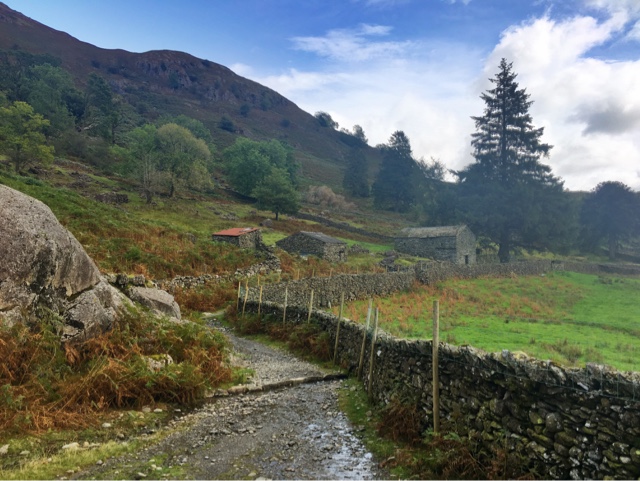 We decided that discretion was the better part of valour, took a deep breath, and walked into the village of Grasmere, 1.5km away, to look for a taxi. Here’s where things got fun.  Grasmere is a one-taxi village and the taxi driver told us that he was heading to Manchester airport and could only pick us up in two and a half hours.  That wasn’t going to work.  A waiter at the local pub suggested that we should take a bus to nearby Ambleside, a larger village just south of the town, where there would be more taxis, or possibly a bus to Patterdale.  He told us that bus #555 passes by every 15 minutes just up the road so we tried that.  When I told the conductor of the #555 that I needed two tickets to Ambleside, I was nearly floored by the fare. £4.50 for each of us to go only 6km!  What robbery!  I then worried just how much a taxi would cost.

Once in Ambleside, we asked at the tourist information how to catch a bus to Patterdale.  The helpful woman gave us directions to the right bus stop but also told us that we had to first take a bus south to Windermere, then change to the #508 to Patterdale.  Okay, we said; which bus do we catch to Windermere?  The #555 she replied.  Hmmmm, that sounds familiar!  Another £9 to Windermere where we found out that we just missed the #508.  The next one was only leaving in an hour and fifty minutes!

We headed for the taxi queue and a driver estimated that it would cost only £25 all the way up to Patterdale, 20km away.  Taxis, not busses are the bargains here.  As we drove along, we discovered that our driver was a rabid Manchester United fan so we hit it off famously.  We had a lot to talk about. He was even flying to Portugal for the upcoming Champion’s League match with Benfica.   When we arrived in Patterdale, he apologised for estimating the fare wrongly.  The meter showed £35 and he offered to split the difference and charge us only £30.  I refused. I gave him £40 and said that we needed to support his habit.  Glory, glory, Man United!  By the way, it took two hours to get from Grasmere to Patterdale.  If we could have walked a level road, that would have been h time for us to cover 12kms!

We are staying in the Old School House B&B tonight.  It is a lovely place run by a fun, young couple but the house is actually owned by two retired teachers from the Jakarta International School.  The sitting room, our bedroom and the backyard are completely decorated with Indonesian artwork and furniture.  We feel right at home.  Dinner was Cumberland sausage and Yorkshire pudding down the road at the White Lion Pub. I’ll just mention the sticky toffee pudding dessert to make some of you jealous.  Delicious!

Today taught us lots of lessons.  Pre-booking accommodation is pretty important for this walk but I hate the lack of flexibility.  Usually we walk until we are tired, then find a bed.  We can’t do that on this walk.  Every bed is booked up weeks, if not months, in advance.  Additionally, we we really hit the wall on our walks in Spain or Italy, we just head out to a road and take a shorter or easier path.  We don’t do that often but it helps to know that we can.  Here, we are in national parks.  There are no roads.  To avoid walking 14km over a mountain, we would have to have walked 21km on a road which has no path for pedestrians.  A good portion of that trip would have also been on a road named The Struggle. Lord knows what that would have been like.  Also, local knowledge is really important.  When we arrived at the B&B this afternoon by taxi, we explained to our hosts what happened.  I said that  it would have taken us until 7pm or 8pm to get here.  She didn’t bat an eye.  She explained that this was the normal time for people walking from Stonethwaite in one day but 95% of her guests cover that distance in two days, stopping overnight in Grasmere.  Now she tells us!Finally, in something like 3,800km of pilgrimage walks that we have done so far, we never had to take a taxi or a bus to cut out a portion of the walk.  It’s disappointing to have had to do it today but I’d rather be disappointed than picking my way down a steep mountain path by torchlight.  I’ll get over it quickly.  Tomorrow is another day.