“The use of traveling is to regulate imagination by reality, and instead of thinking how things may be, to see them as they are.” ~Samuel Johnson 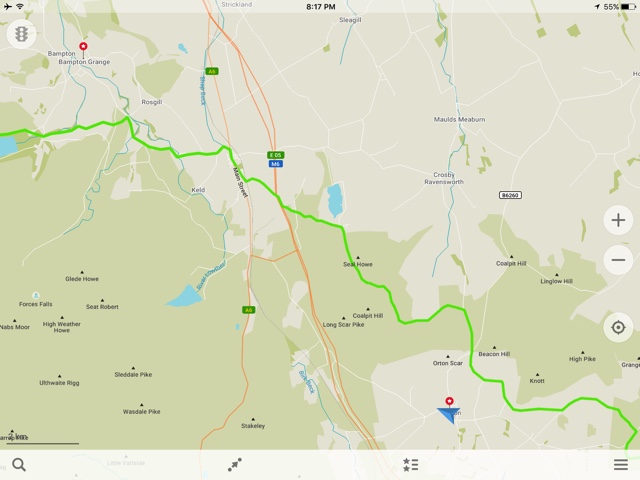 Now THAT was my kind of walking day!  Actually, the mileage was a little shorter than I like but it was nice to arrive at 3:30pm after a 9:00am start.  We left the Lake District National Park early this morning so we have two flat days before the Yorkshire Dales (hills) although once we crossed over the M6 motorway and walked through the “quaint” town of Shap, we were soon in the Yorkshire Dales National Park.  We could see the hills in front of us as we walked but today only had a bunch of relatively flat hills of 50-100m.

The day started by having to get back to the Coast to Coast trail since Bampton Grange is a couple of kilometres off the trail.  We had a GPS fix on some road walking back to the route but our hostess this morning gave us much better directions for a more direct route off-road.  Now this is easier to understand when it’s written down but imagine us hearing this, in a thick Yorkshire accent at warp speed: “Just go straight across the road, through the church yard, follow the muddy footprints through four fields with one gate, then a style, then a fence gap, then a stepping stones then another gate, turn right over the Rosgill Bridge, bear left then at the crossroad, look for the footpath marked towards Shap, ignore that but go through the nearby gate on the left and find two paths, taking the one on the left”.  Somehow we still managed to arrive at Shap. 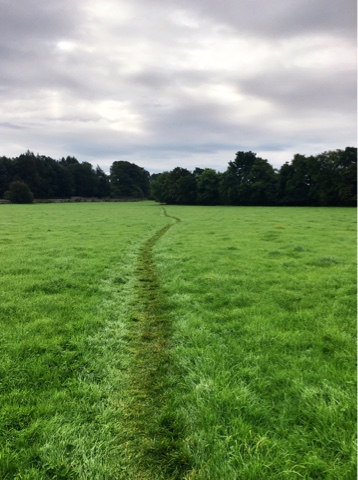 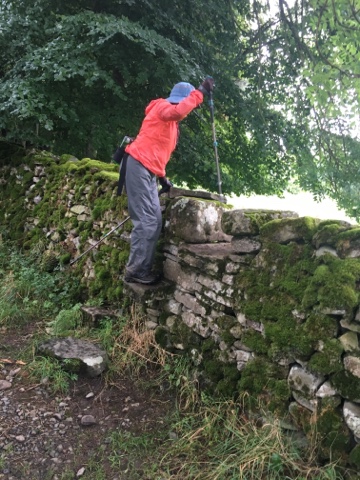 The steps over the wall are built into the wall.  Cool, huh? 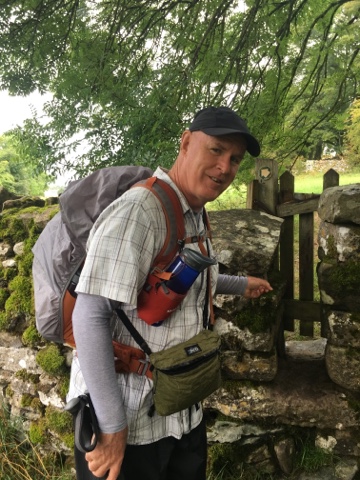 How am I supposed to fit through that? 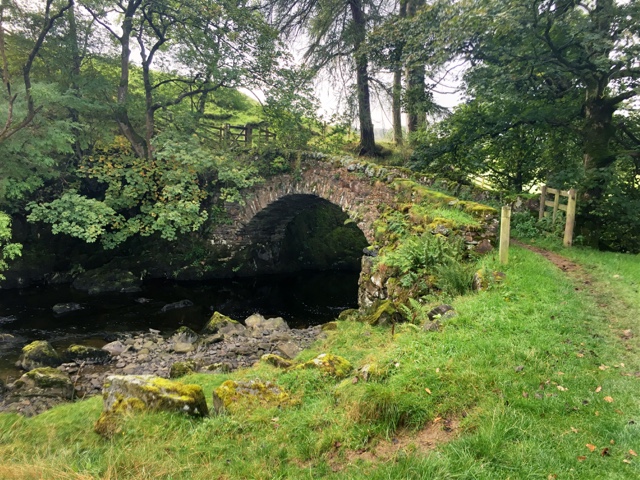 Before we got to Shap though, we passed the 12th century Shap Abbey, affectionately known locally as “The Shabby”. Actually, it’s not called that but it really should be.  Maybe it was back in the 1200’s or at least by 1540 when the evil King Henry VIII closed it down. 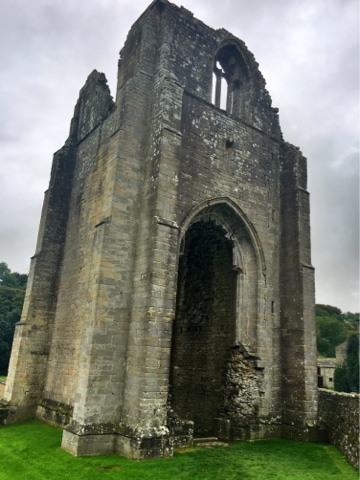 Entering Shap, after about 6.6km, Melanie and I were both keen for a good old fashioned Spanish bar from the Camino that happily welcome pilgrims, serves us a café Americano, Kas de Limon soft drink and a couple of pastries while also supplying a clean toilet break.  We asked a couple of men we met on the road that we passed from one end of town to the other if there was a pub and they all happily said there were a couple, just keep walking straight ahead on the Main Street and we couldn’t miss them.  We passed a closed-down cafe, and a closed restaurant before finally finding a pub with a sign outside saying “open all day, food available” — which was closed.  No toilet break here.  We checked with another man we passed in the street who told us there was another pub just 100m further down the road on the right.  That was closed too.  By then, I almost wanted to pee on the front door.  A woman passed by so we asked her the same question “Is there another pub in town?”  She answered that there was but, just like the other pubs, it doesn’t open until 3pm and if you want food, you have to go to the grocers who sells sandwiches and cold drinks.  Always ask a woman.  The men are probably still shaking their heads, wondering why these strange foreign travellers were asking where the pubs were when the pubs wouldn’t be opened for at least three more hours.

After Shap, we crossed the highway to the Yorkshire Dales National Park and the trail for most of the rest of the day was over rolling farm fields, occasionally through muddy or boggy bits but it was wonderful walking.  As our destination for the day, Orton, was about 2km off the Coast to Coast route, we had to make our own path to it.  We could have followed the C2C route further to the east of Orton, then cut back to it by road but once we were about 3km directly north of town, at a King’s Well, we found a path in a valley that was more direct to Orton.  One of the best parts of that way was that after only about 150m of this route, we passed by Robin Hoods Grave.  After passing his chair the other day and ending our walk in his bay, we were pretty happy to hit another of his hot spots. 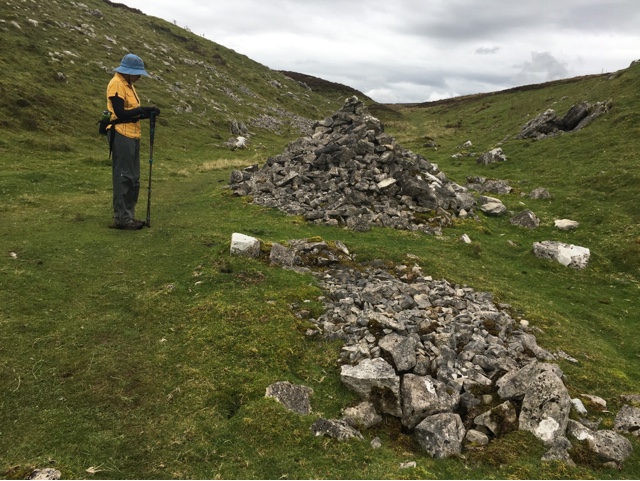 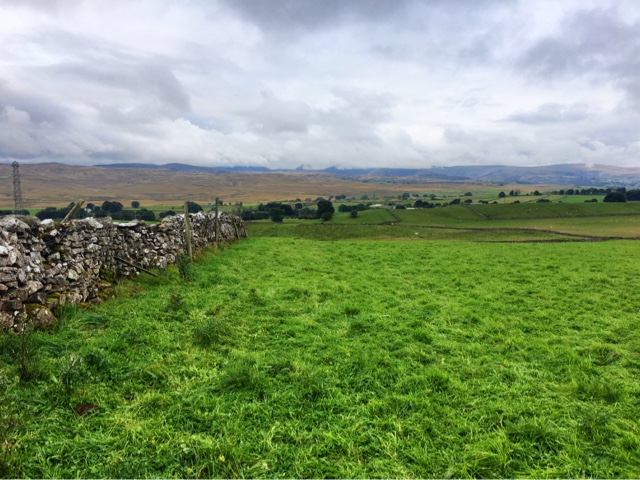 This path we were on was as far away from civilisation as I think you can get in England.  The only sign of human life we saw were two walkers coming towards us who said that they hadn’t seen evidence of humans for the two hours that they had been walking.  This part of the trail was almost perfect for us.  It only got bad in the last 100m before the edge of town.  That is where the field we were walking through suddenly turned boggier (I’m coining that word) than we had seen to date.  I was stepping on “dry land” but the sponge below me was instantly giving way and I was soon shin deep in water with every step.  The shoes and socks are now in the boiler room and hopefully dry by morning. Eventually we climbed over the ancient 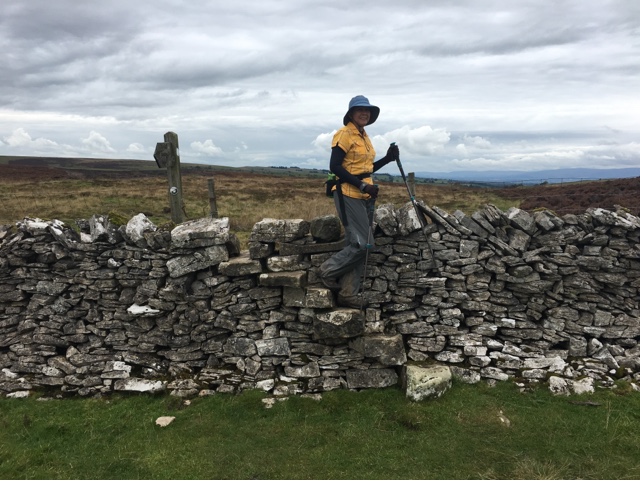 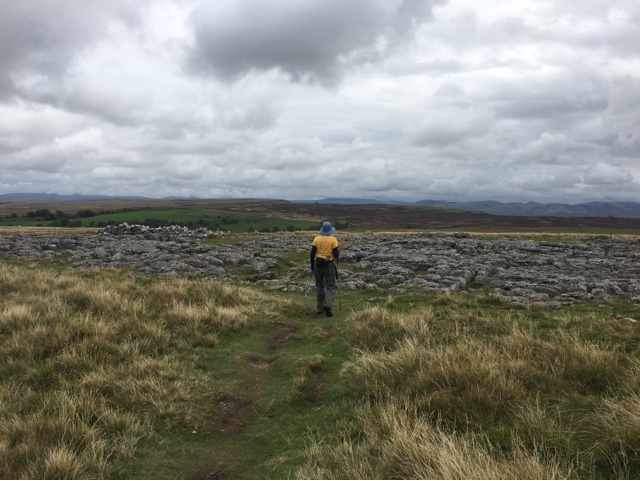 Into the limestone country that is the Yorkshire Dales. 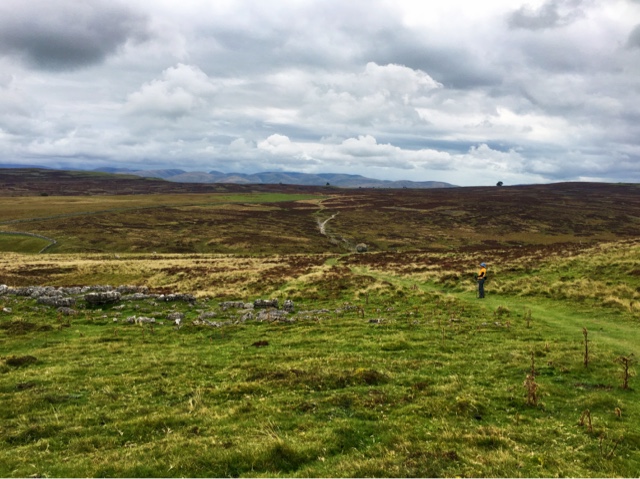 The Dales in the distance.

We have another late start and short day tomorrow.  If we have half as nice day as we did today, we will be happy. 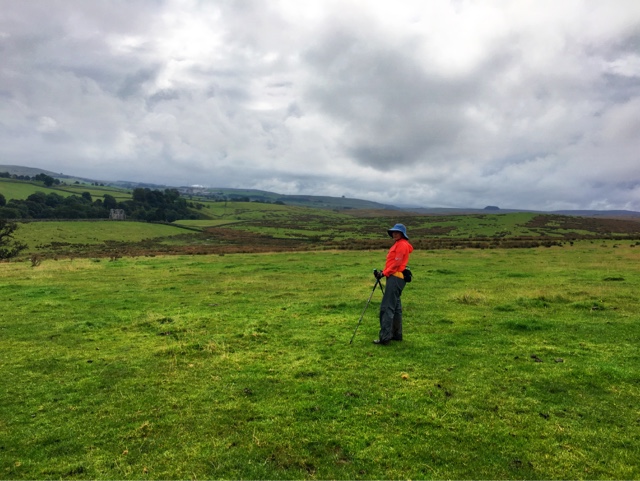 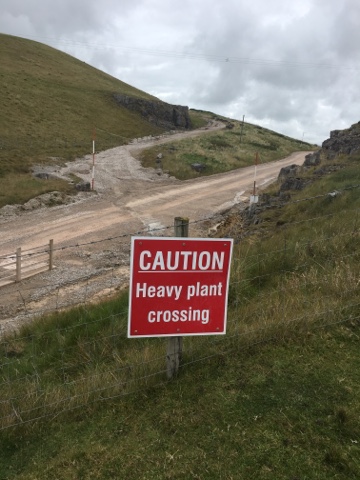 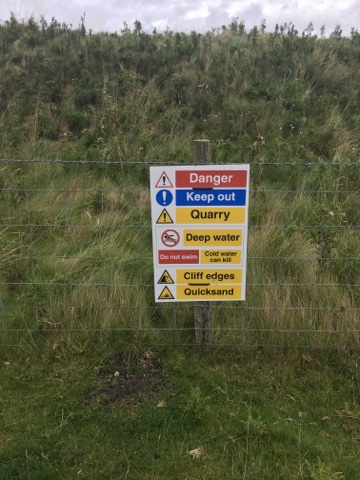 I think wthe point they are making is that we need to stay away.  There are several hash names in the sign though. 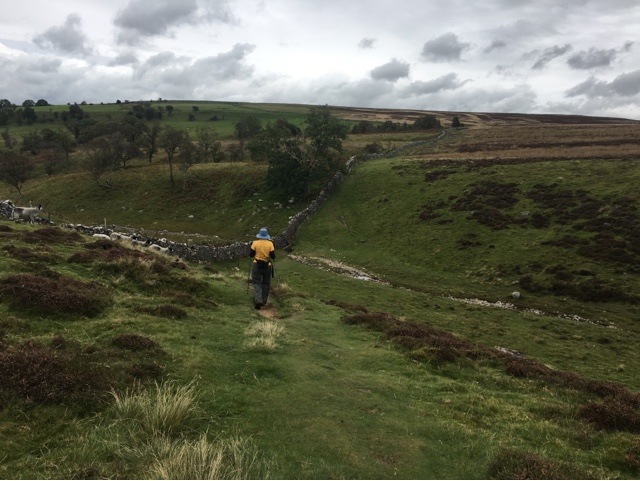