“Travel is fatal to prejudice, bigotry, and narrow-mindedness, and many of our people need it sorely on these accounts. Broad, wholesome, charitable views of men and things cannot be acquired by vegetating in one little corner of the earth all one’s lifetime.” ~Mark Twain 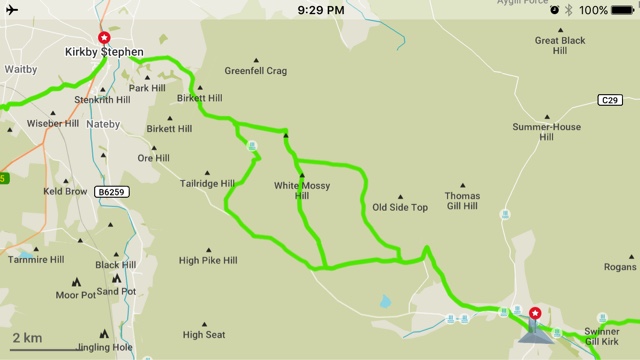 With three options, we took the most northerly route, which is highly suggested for walking in September.  The routes are made to spread out the erosion on the high bogs due to walkers. 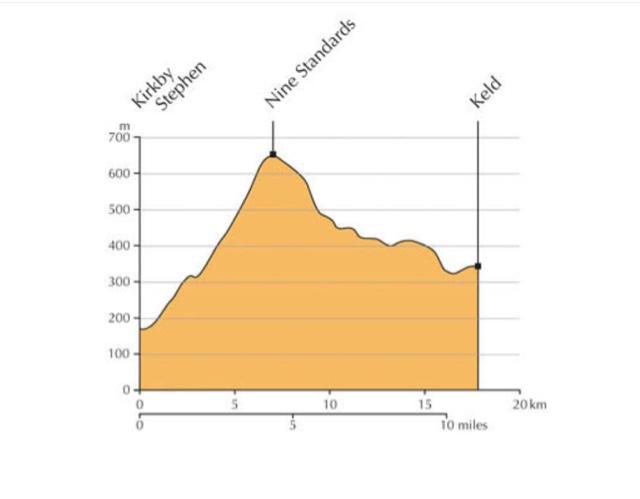 Today was, I believe our last day with a real mountain climb.  We crossed the Nine Standards at 11am, a peak along the east-west dividing line of the country, with all the rivers on the Kirkby Stephen side flowing to the Irish Sea and all the rivers on the Keld side flowing to the North Sea.  Finally, by mileage and walking days, we are also half way done our walk across the country.  My, how the time flies when you are ankle deep in mud. 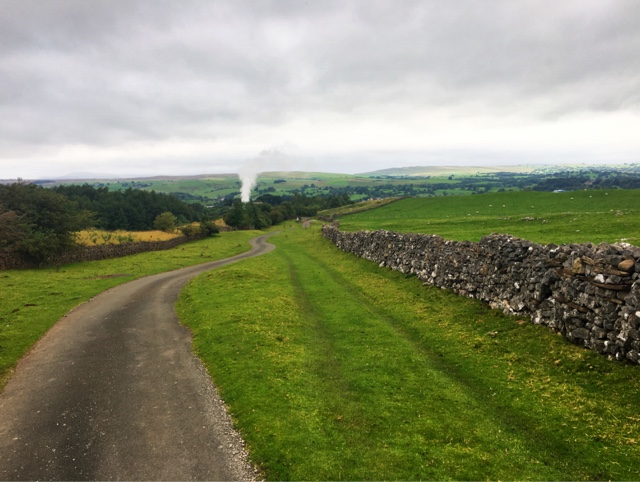 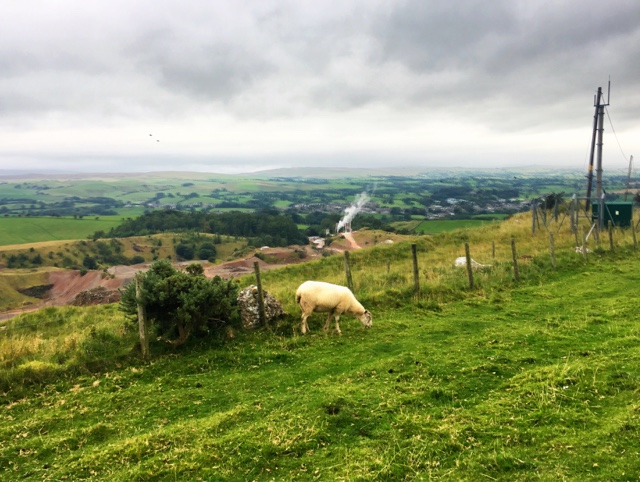 Our walk today was a simple climb to 660m over 7km then a descent to 350m over the next 10km.  The changes in altitude appeared fairly steady throughout.  There were no places where we needed to scramble up or down rocks like in the Lake District.  Why then were we so nervous about the day? Because everyone we spoke to told us to worry!  Walkers we met on the trail over the past few days who were walking east to west told us stories of being in mud up to their knees, climbing in and out of drainage ditches 1.5m deep, sinking into bog water up to their shins, etc.  Some people who were walking the same direction as we were, were also repeating these stories but exaggerating them as well.  The guidebook also hinted at the expected quagmire. 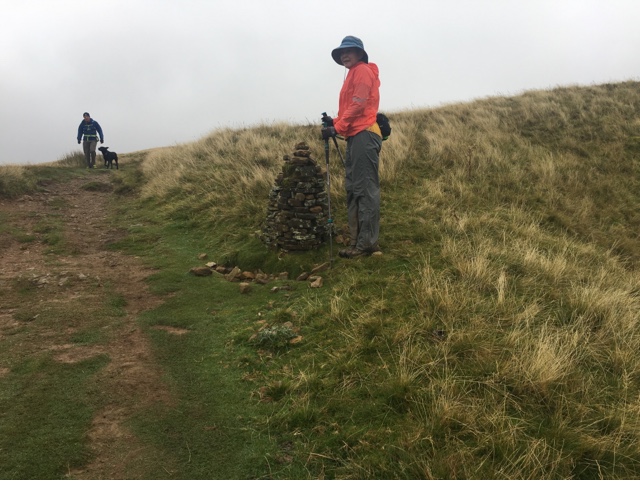 As we walked though, we found the route easier than we expected. The first 3.4km were even on a small country lane.  After that we had another section on a rocky path. By the time we got to a muddy / dirt / grassy path, we were half way up the mountain.  The drawback was that it was getting colder, cloudier and windier with every step we took.  The only forecast that we had heard was that it was not supposed to rain.  It became harder to avoid the muddy tracks as we got higher but we were also walking straight into a cloud.  We were very close to the summit when we finally could make out the Nine Standards, just in front of us. 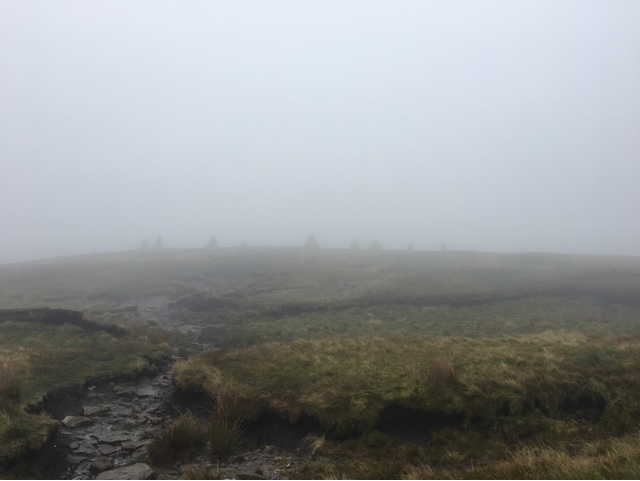 The Nine Standards are nine large ancient cairns which stand in a line at the top of the mountain.  No one knows why they were built or when they were built but they appear on 500 year-old maps.  One fanciful story is that they were built by the English army to make it appear to the marauding Scots that the English had an encampment on the mountain, overlooking the main road from Scotland to London.  They wanted to scare the Scots into not invading.  First, only nine “tents”?  second, no people visible? If this were true, the English had a lower opinion of the Scots’ intelligence and bravery than anyone imagined.  Yes, this theory was rather fanciful. 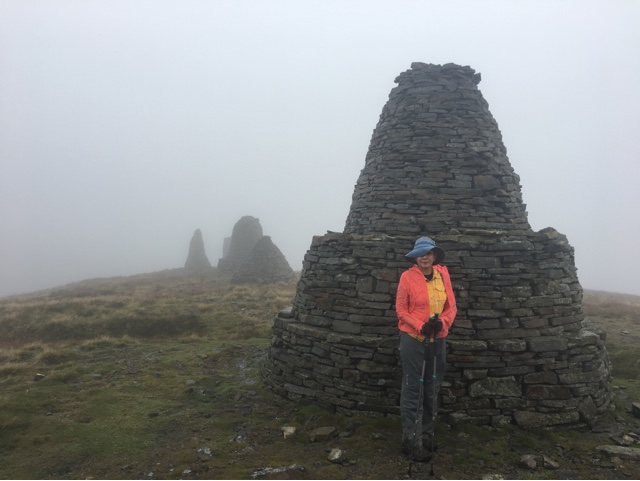 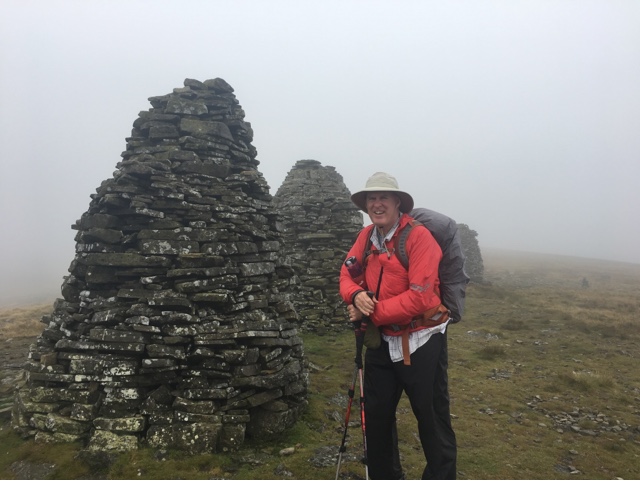 The cloud today was so thick at the summit that we could not easily see from one end of the Standards to another.  The wind was very strong and very cold.  We only managed to take two quick photos before racing towards the descent. Despite how unpleasant it was on the top, we met a young man and his dog coming down, just before we reached the summit.  As everyone does here, we stopped to chat for a moment and we found out that he is from Kirkby Stephen.  He told us that he walks to the Nine Standards every morning to have his tea.  Holy moley!  I’m not sure how fast he is but we took two hours to get this far.  My tea would have gotten cold in that time. 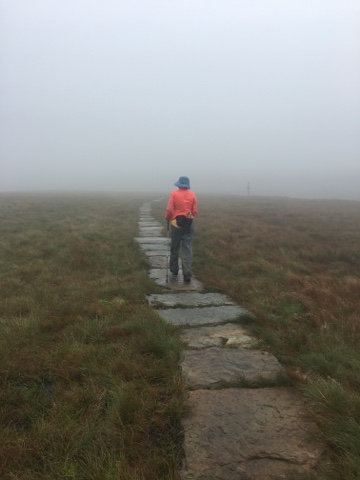 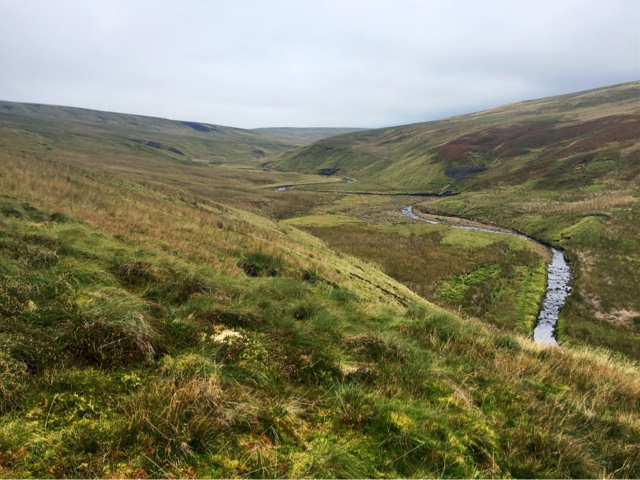 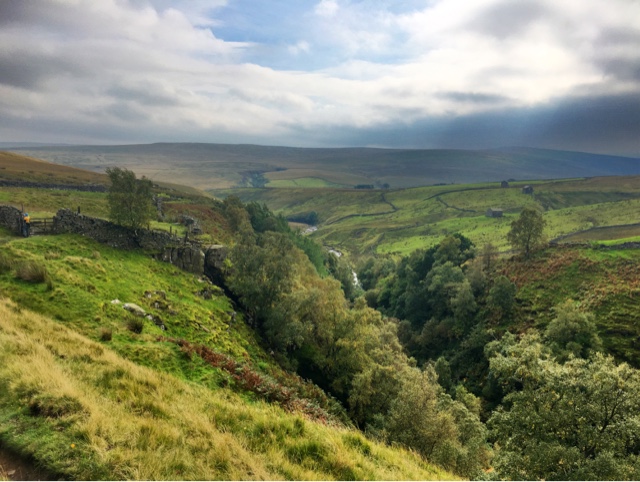 After leaving the cairns, we had about 2.5km of extremely boggy conditions.  The trails have degraded so much because of the people who do sink into the bogs that for a few hundred meters, the local climbers have placed large, thick flagstone to basically create a sidewalk.  That was fantastic but the rest of the way was a boggy nightmare.  This area explained why we sometimes take 30 minutes just to walk one kilometre.  It is like we are walking on a maze and we have to figure out how to move forward.  First we need to take several steps sideways, then back, then many more steps the other way before we can take a step forward.  Then we start again.  All this is to avoid stepping into the deep mud.  We had long ago given up trying to avoid the clear bog water but the black water was still a no-go area.  Despite the effort, I was ankle-deep in mud a few times and shin deep in water many times.  My socks squished with every step.  Fortunately, Melanie is an expert at bog-hopping so I could usually follow her although, at twice her weight (with me carrying all the gear), she doesn’t sink quite as fast as I do.

The rest of the descent was muddy and boggy in patches but, as I said, much better than we expected. 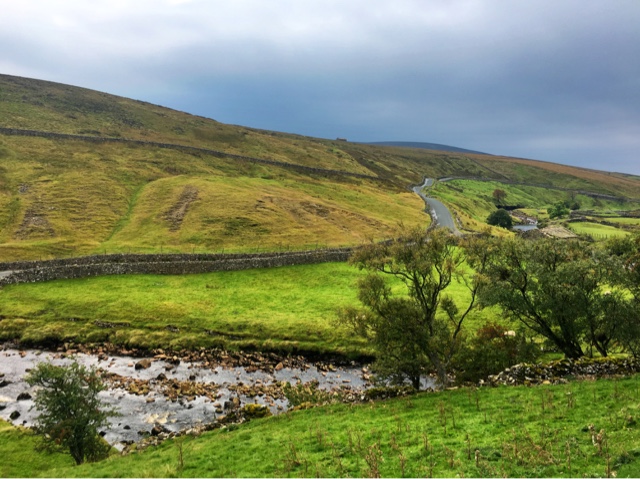 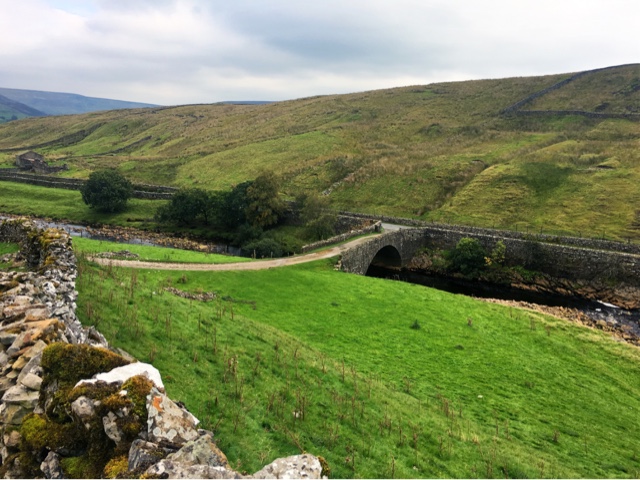 We are staying tonight in Butt House B&B (no jokes please) in the incredibly small village of Keld.  At one time, it was the centre of the lead mining industry here but they still only have about 20 buildings in the village.  Other guests who are staying at this B&B include people we have run into and spoken with before.  They include a younger couple from Minnesota who have also walked the Camino de Santiago, a nice Aussie man who is a glider pilot, a quiet Dubliner who is very nice to talk to if you get him one-on-one and, finally, a rather strange American teacher.  I’ll have to tell you more about him later, just in case, by coincidence, he reads this blog while we are still on the trail near him and in case he has a gun.