Skip to primary content
“Travel brings power and love back into your life.”  ~Jalaluddin Rumi 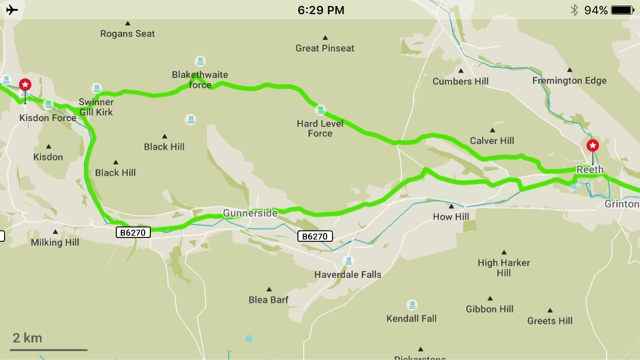 Our first real rain!  We are really in England!  Actually, is wasn’t bad at all and it wasn’t as bad as forecast.  We were told before going to bed last night that it was supposed to rain most of today.  Because we have been blessed with good weather so far, we could not really complain.  Throughout the night, we were woken up by howling winds though so we worried a bit.  By breakfast time, however, the rain was steady but light and we found out that it was only windy last night, not rainy.  There was hope. 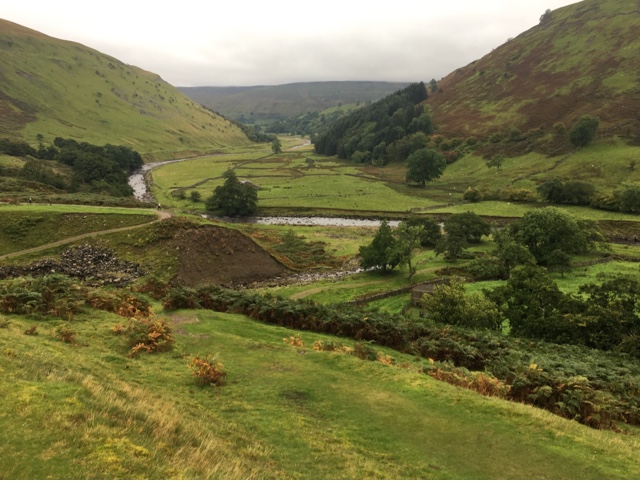 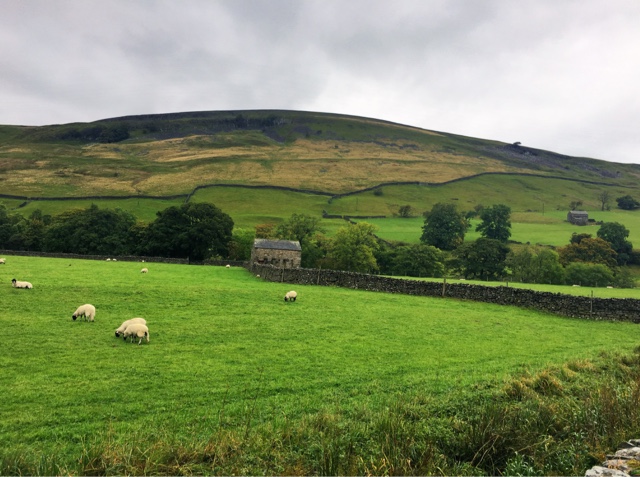 Due to the rain, we chose to do the longer, lower route.  We missed walking past old, abandoned lead mines but we got to detour over to the lovely little village of Muker.  It rained steadily, but lightly – at least by tropical Singapore standards – from the moment we stepped out the door until we walked out of the woollen shop in Muker.  After that, the heavy clouds slowly moved away until the point we passed though Healaugh, a couple of kilometres before Reeth, where the sun actually shined enough to cause a proper shadow. 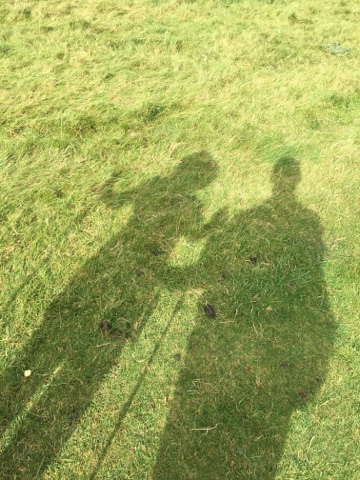 The great news about the rain was that it came during a time when we were on the best of paths.  The 5km from Keld to Muker was mostly on a wide gravel track that easily shed any water out of our way.  There were a few, short but steep muddy tracks but they were easily, though slowly, navigated.  We followed the Coast to Coast route until about 800m north of Muker, then we crossed the River Swale via a footbridge just wide enough for my hips.  From there to the village, we walked through a dozen fields, usually on flagstone paths, each field separated by an ancient stacked rock wall.  To get from one field to the next field, we passed through a gap-stile which is just a gap in the wall, usually about 30 to 50cm above the ground with a gate that never quite fits in the gap.  The problem for me is that the gap is often about 30cm wide and the wall may be 1.5m high.  In other words, I don’t fit through!  With lower walls, I can usually manage to squeeze my hips and butt through but I definitely can’t fit through the taller walls with my backpack.  It is humbling and I am glad I don’t have to watch myself trying to wiggle over and through.  Several times, I also got my foot caught by the spring-loaded gate.  Embarrassing, for sure. 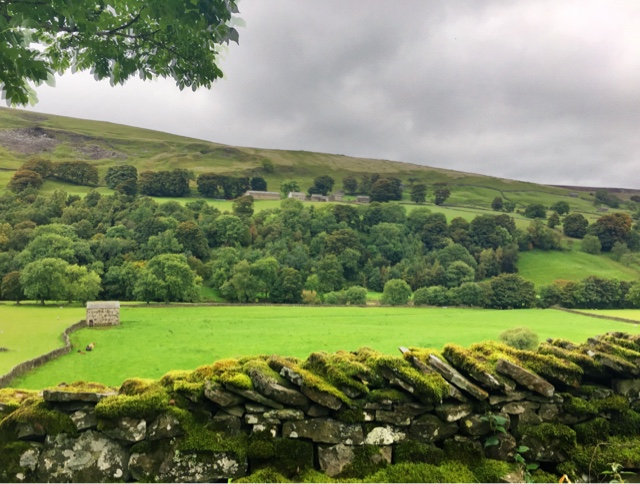 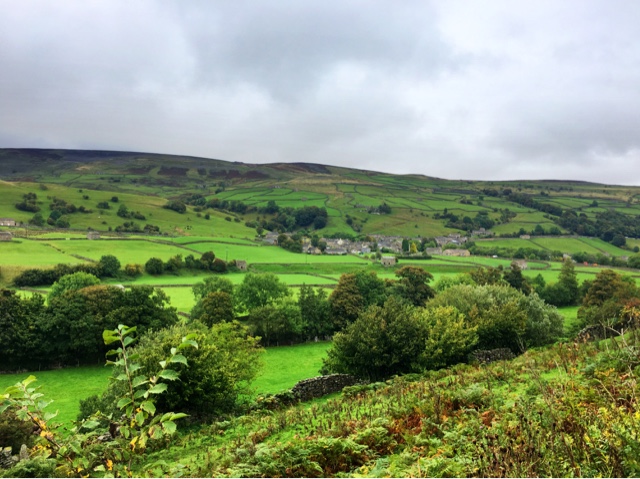 In Muker, we were told that it was mandatory to stop in the village café for tea and scones.  How English is that?  They were delicious.   In the café, I had my “Dad moment” when the waiter came out carrying a tray with a couple of cups and saucers on it.  He wasn’t sure who ordered what so he said “I have two teas”.  I replied, “I know the answer! You are butter”!  You have to think like my Dad to figure out that one.  The waiter didn’t. 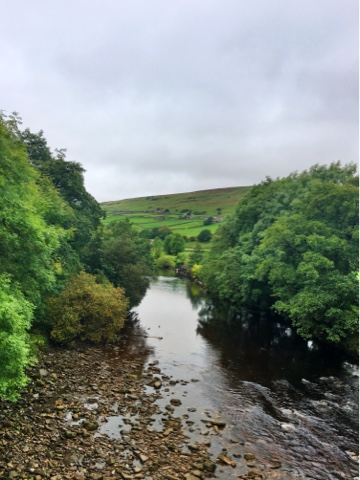 Next door to the café was woollen shop that was also a mandatory stop.  Even Prince Charles stopped there in 2004, according to the plaque on the outside wall and the photos and letter of thanks inside.  Our Australian friend cleared space in his backpack just to stop here and buy a sweater.  Apparently they don’t have enough wool in Australia. 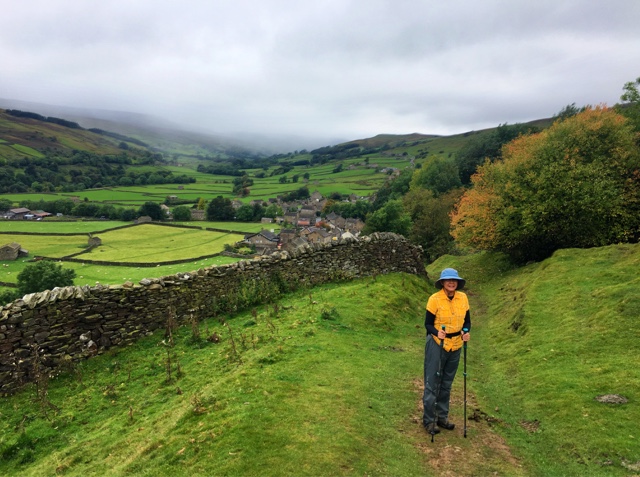 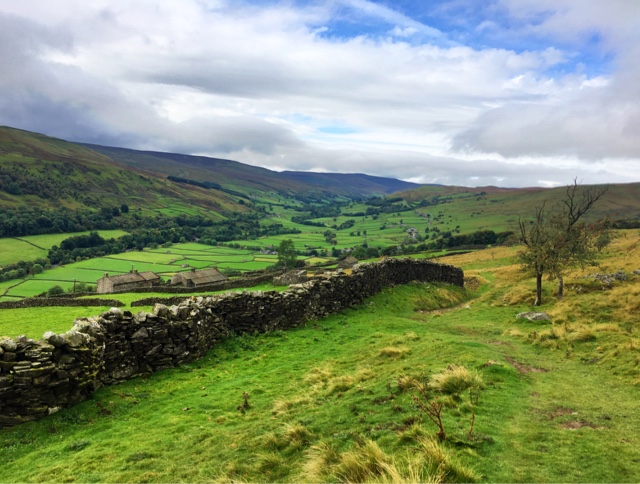 By the time we left that store around 11am, the rain had stopped.  Although it looked threatening for much of the rest of the day, it never even drizzled again.  We were able to dry out our raincoats and put them away.  We had about 4km along a quiet country lane to another quaint town, Gunnerside, where we could rejoin the Coast to Coast trail.  There was an option to stop in the village for lunch or a snack but we were both happy to plod on.  The route the rest of the way to Keld, through the Swale valley (Swaledale), went along rolling hills through farmland and, for the last couple of kilometres, along the River Swale. 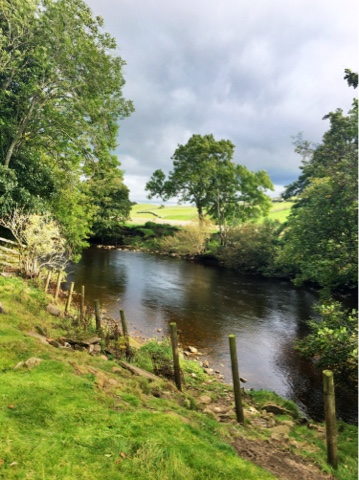 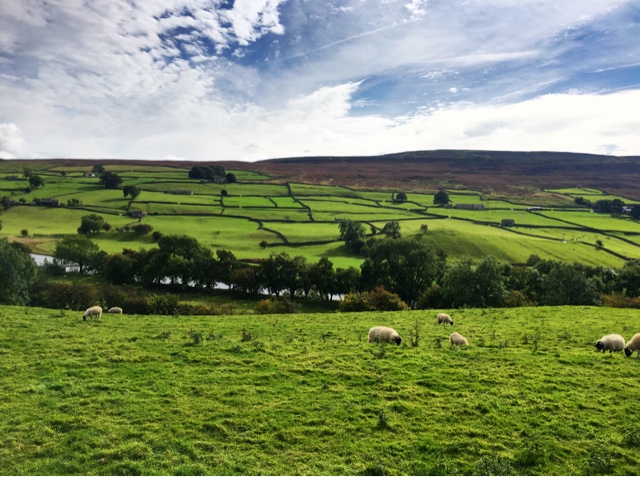 We are now in Reeth, a slightly bigger village than we are used to.  They actually have a few hotels, three pubs, and at least a dozen B&Bs. It’s really a happening place, by Coast to Coast standards.  We are staying in a lovely little Manse B&B, just off the main square.  I’m being lazy by letting the host do our laundry for the royal sum of £9.  It is a ridiculous price but I am tired of hand washing everything, hanging it on a makeshift clothesline over the bed and putting on slightly damp clothing in the morning.
Peace y’all.