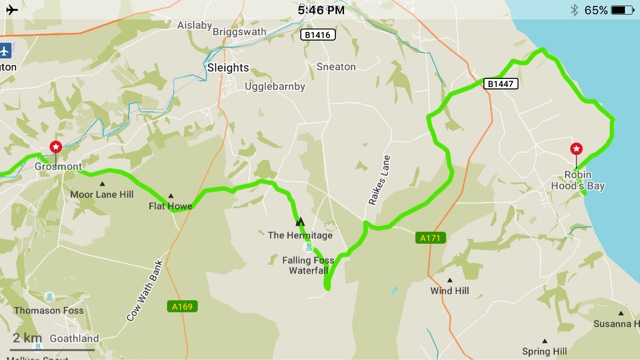 “Our battered suitcases were piled on the sidewalk again; we had longer ways to go. But no matter, the road is life.” -Jack Kerouac

Today’s walk started just like the first day’s.  Up.  We would later find a lot about our last day’s trails to be a microcosm of the past two weeks.  We would also find out that the Coast to Coast gods had not yet finished testing us.  This last day’s walk, was not one meant to be savoured but endured.  We just didn’t realise that yet.

As we walked out of the small village of Grosmont, we knew we had an immediate 200m climb over the first 2.5km but we only find out, through perspiration, that the first 100m of the climb was in the first 600m of the walk with two parts at a 33% slope.  I wasn’t feeling very well to start with and seeing Melanie powering on 100m ahead of me was concerning.  We had not even walked the first kilometre and I was already thinking about catching a bus. 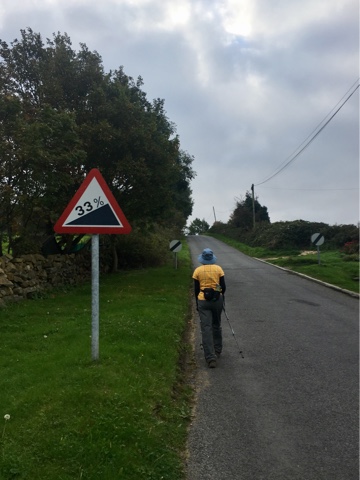 Melanie sensed that things weren’t quite right – she’s not usually that much faster than I am – so she slowed down and encouraged me.  We made it to the highest point of today’s walk and were rewarded with yet another high moor and the fantastic scenery that it provided.  The trails were in great shape with slightly soft packed dirt underfoot and wildlife all around.  We were supposed to be able to see the North Sea in places over the past two days but again, the clouds and misty sky prevented that.  I felt a bit better by then and now my main worry was that we would not see the North Sea before we fell over the cliff into it. 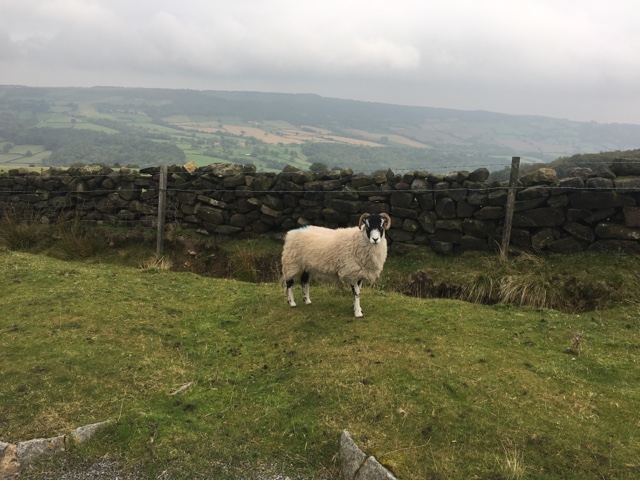 After descending off the moor, we thought for the last time, I recalled thinking that the moors were my favourite part of this walk, even more so than the gorgeous views in the Lake District.  The moors had their own, more subtle, charms and beauty.  I was going to miss them, I thought.

After the moor, we came down through he tiny village of Littlebeck into a forest trail.  This is where we first met a Quaker family.  The five children were all homeschooled, incredibly friendly, polite and inquisitive.  During our brief exchange with them as we entered the forest, the most appropriate word that I could think to describe them was “sweet”.  Occasionally we could hear them behind us but I think it was an educational field trip for them so we kept our distance.

This 3km section through the forest was fantastic for us and I was reminded that we actually have been in very little real forest over the past two weeks.  I am not sure if that is because England has cut down all its old trees, the English don’t like walking in the woods or that England’s trails are beautiful enough without hiding the views with trees.  Whatever the reason, we enjoyed this section for its diversity and reminder of our walks in the US, Spain, Italy and even Singapore.  Of special note during this portion was the Hermitage.  This was a large rock on the trail that, in 1790, George Chubb carved out a very basic space inside with a bench where at least a half dozen men could sit comfortably.  Why he did it, no one now knows but it would be a great shelter from a storm or overnight camping spot. 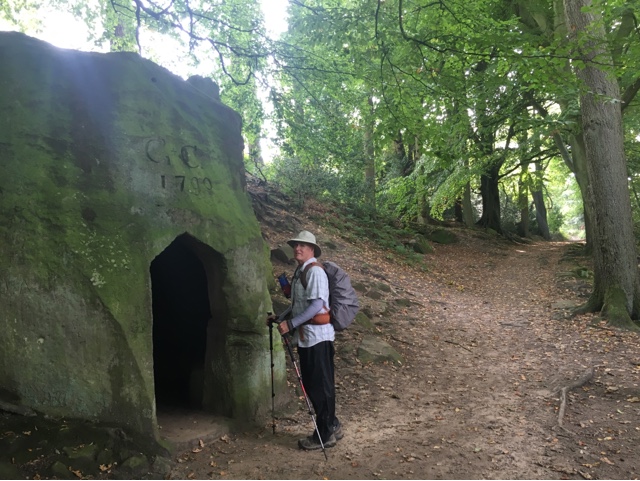 Another highlight of the forest was a small tea garden next to Falling Foss Waterfall.  The waterfall was okay but the carrot cake, soda and hot chocolate in the lovely gardens was even better.  The spotlessly clean toilets were the icing on the cake too.  Well not the icing on the carrot cake but you know what I mean.  We also met with the Quaker family again here and had more of a chance to speak with them. The youngest, about six-years old, is a darling and lacks any shyness.  We asked the parents if we could keep her.  Unfortunately, they have already grown attached to her. 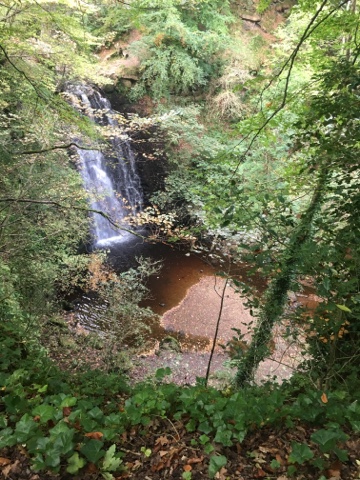 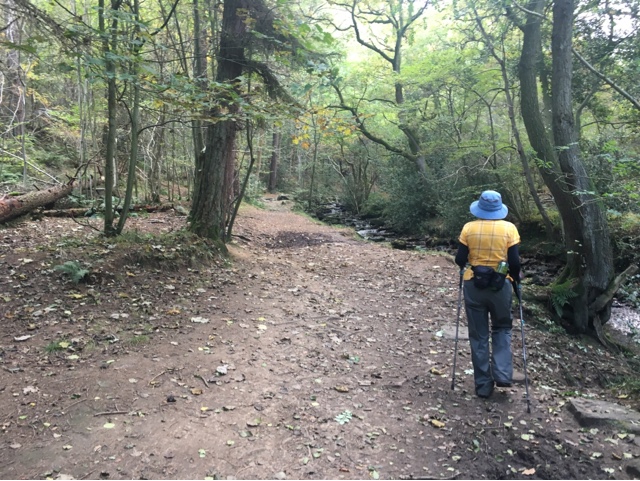 After the forest, we had a kilometre walk up a road where a British driver pulled over to ask directions of US!  Not only that, but we were actually able to give him the correct directions to where he wanted to go because we had previously walked passed where he was headed.  The most amazing part was, according to Melanie, was that it was a man asking directions.  She claims that she had never heard of men being capable of doing that.

At the end of the road that went through pastureland, we were surprised to turn onto a small hill that led up to another small section of moor.  Yeah!  This moor seemed a bit different from others though.  So far, we have had a few small muddy sections of the trails through the moor but they were always easy to bypass on the edge of the trail or hopping from stone to stone.  This particular moor which we were now traversing had a fair bit more mud but we could still get past it by hopping over the heather bushes.  We only had about 700m to get through but at about the 500m mark, Melanie said that she thought these moors were just jealous that the bogs back around the Lake District and the Nine Standards had more fun messing with us.  I jokingly challenged the moors to try a lot harder before they could be in the same league as the bogs.  Boy am I stupid.  With only about 100m before we reached a road, we hit a spot that we could just not figure how to avoid.  We could go straight through the mud that looked deep or bypass it through brown water on bogs that felt like a massive, cheap and deep sponge.  We searched for ten minutes looking for a way around it and eventually decided to just run for it over the bogs, rather than the mud.  The idea was that if we didn’t stop, we would not sink in.  Just to let you know for future reference, that doesn’t work perfectly.  Somehow though, Melanie got through with water up to the tops of both boots, but not in the boots.  I managed the same accomplishment with my right shoe but not the left one.  At the other side of the messy spot, I swear I could feel fish swimming inside my left shoe.  Great! We still had half a day’s walk to do and I was going to be walking, sounding like crunch, plop, crunch, plop… This was the first time in the whole walk when my sock was truly drenched.  Me and my big mouth.  Oh well, we just got on with it until… 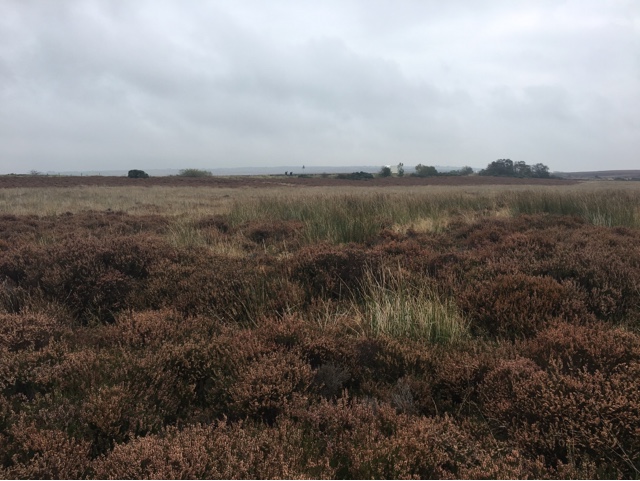 After reaching the road and dumping a litre of water from my shoe, we walked along the verge, happy for the dry ground.  It wasn’t long though before we needed to turn left into yet another bloody moor.  We stood at the road, looking at the dry track that was closest to the road and wondered how bad it could be.  Just then, an older couple walked past us at a fast pace.  If it was good enough for them, we should be able to do it.  We started to follow them but we couldn’t keep up.  The trail did deteriorate the further we got from the road but that couple was leading the secret way through the bog maze.  Once they were too far in front to point out the places to step, we had to walk slower.  Again, another couple went passed us, although not as fast as the first.  It turned out to be the couple who looked like they needed CPR on the hill just a few days earlier.  Melanie called them the Bog Whisperers as they hopped from hard ground to hard ground.  We had new experts to follow.  About half way through, they stopped to rest and invited us to go ahead.  I think they just got tired of being followed.  It didn’t matter now though because I learned a lot from them.  I figured I could now bog-hop like a pro.  I set off leading Melanie and after the tenth step, I was up to my knees in brown bog water.  So far, no good.  I sloshed out of that spot and didn’t really care what I stepped in after that.  It couldn’t get worse.  The old folks soon re-took the lead and got us to the other end.  We were wet and humbled. 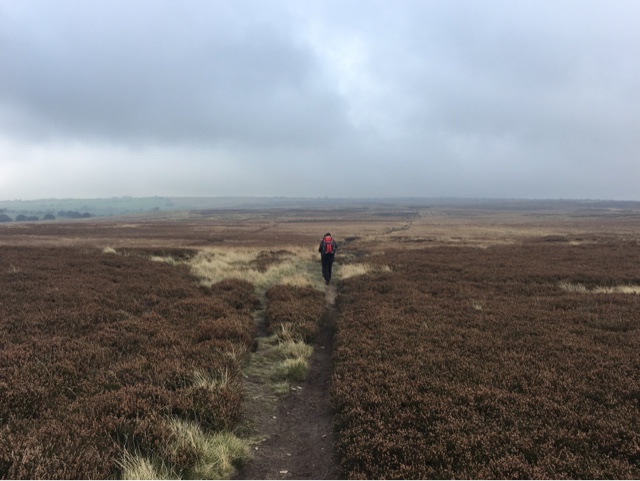 All we had to do now was negotiate our way down a small, rocky stream bed before we were rewarded with 4.5km of road walking.  It took 4km of that before I stopped leaving wet footprints behind me.  That took us all the way to the cliffs overlooking the North Sea, just north of Robin Hood’s Bay.  We made it.  We still had to follow the coastline another 5km southward over windswept undulating trails but we made it to the North Sea.  Even if I had to jump over the cliff, we were there. 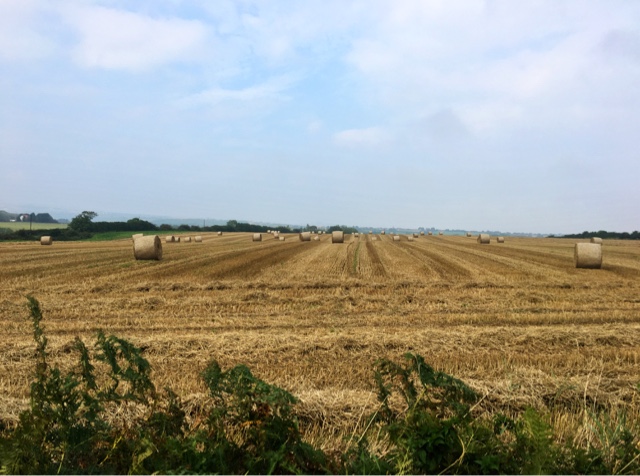 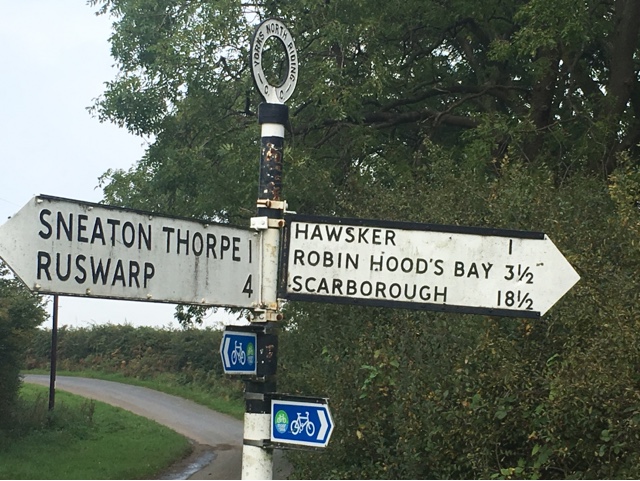 The cliffside walk was lovely and even soggy socks, inquisitive cows and slippery rocks didn’t sour the mood.  As the town came into view, we practically started to run.     Once we got to the seaside houses, we still had a very steep 100m drop to the sea but at least we were going downward.  I was expecting only a few people – all fellow Coast to Coast walkers – to care that we arrived but lots of tourists and locals exchanged smiles or congratulations with us as we marched that last few hundred meters.  Just as a final insult to us, when we arrived at the boat ramp, we saw that it was low tide.  We still had 100m to get to the sea and dip our toes in the water.  Instead of throwing the pebble that Melanie picked up in the Irish Sea, into the North Sea, Melanie dipped it in the water and put it in her pocket as a keepsake.  Our job was complete. 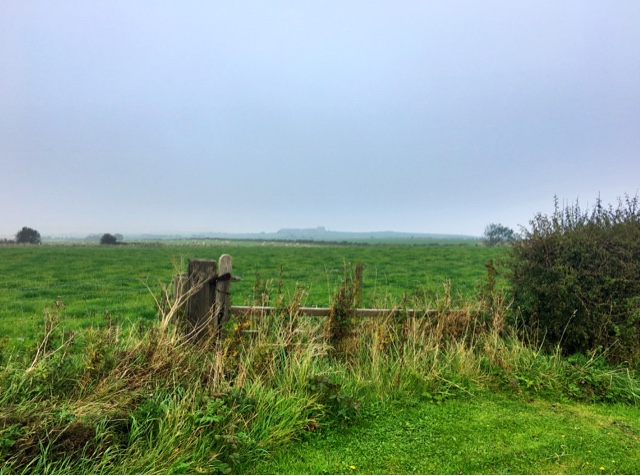 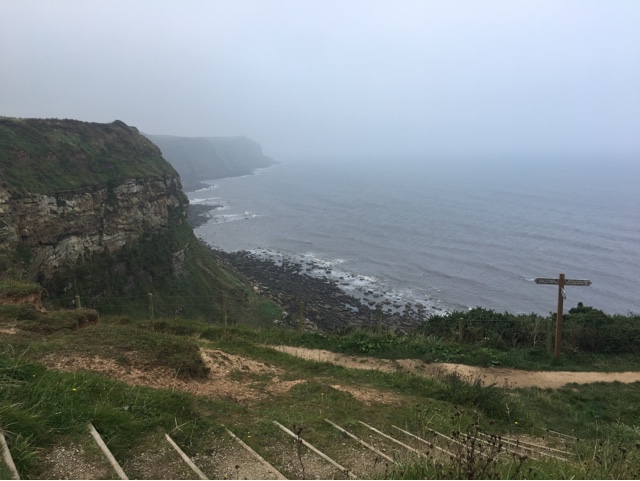 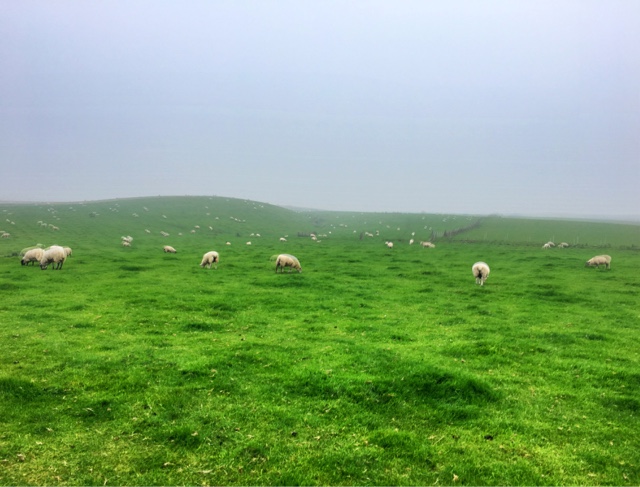 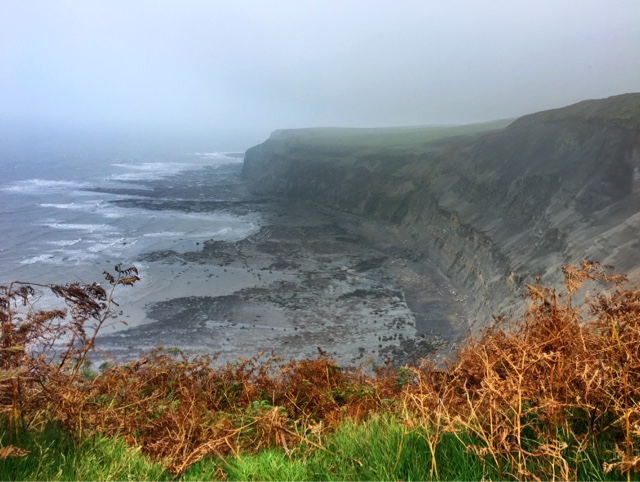 A quick couple of photos later, we headed to the Wainwright Pub in the Bay Hotel at the bottom of the town to sign into the guest book and have a pint of Wainwright beer.  There was a raucous crowd in there that just got louder and louder as the late afternoon went on.  Half the drinkers were Coast to Coasters celebrating and sharing stories and the other half were tourists who just enjoyed the scene.  Most of the people we met on the walk were at least a day or two behind us but we were happy to see Greg and What’s Her Name (Georgie and Denise) as well as a few other people we had at least met over the past two days. 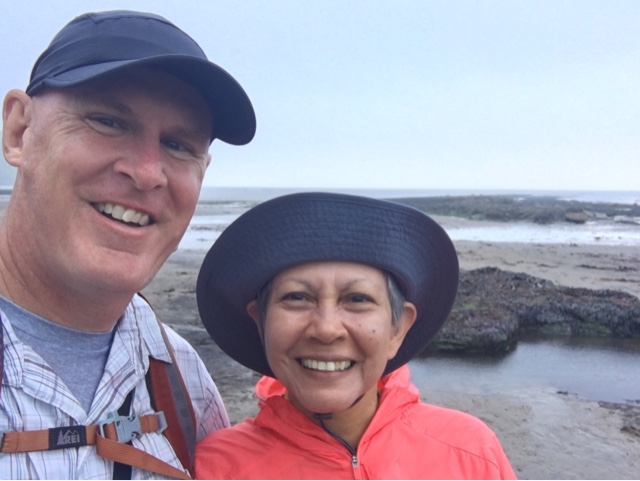 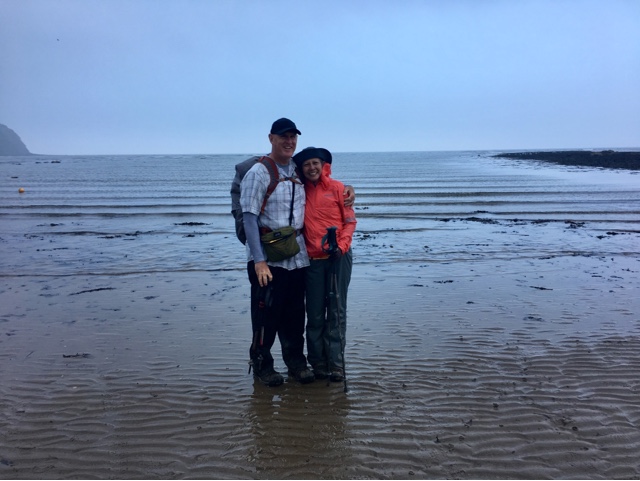 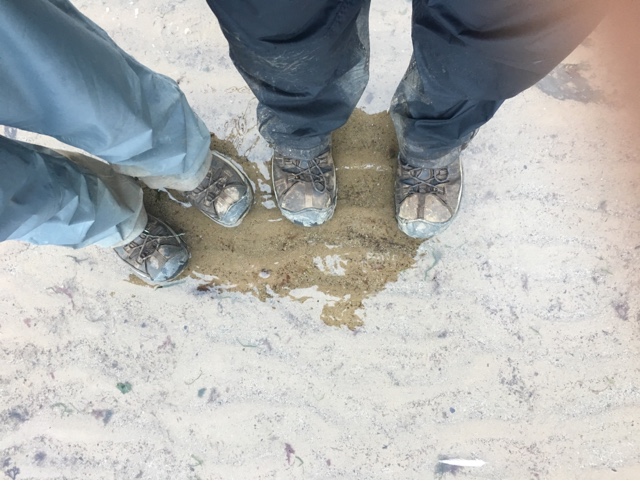 The only other things of note from the last day included walking back up the hill to our B&B, along with the Quaker family who we met for a third time.  That’s how I knew they were Quakers and not Amish. A horse and buggy would not have made it here as fast as Quakers can in a car.  Also, we had a lovely dinner at the Victorian Hotel with Georgie, Denise and two new hysterically funny Aussie friends, Marie and Laura.

We were done.  This was a tough one even though it was only two weeks and 300km.  The bogs, mud, rock scrambles, steep ascents and descents made it a challenge but the scenery, the fellow walkers, the fantastic hosts and other people we met, and the food and beer all made it far more than worthwhile.  Our horizons have been expanded.