I should mention right away that the timing of today’s walk includes at least one and a half hours for lunch and a car ride. I’ll give you the details of that in a moment. I just don’t want you thinking that we are really that slow on relatively flat terrain. Also, despite the car ride, we didn’t cheat. 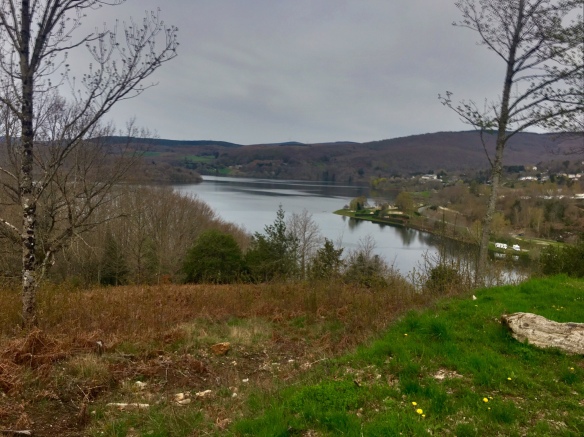 In general, it was a fantastic walk today through forest trails, logger’s tracks, stream beds and a bit of never used roads except for one section. We were supposed to follow a 5km trail along side of the Laouzes Lake but as we arrived, we saw a sign that said “if the water is high, the trail is impassible and you must use the parallel road to the next town”. At least that’s how I interpreted it. How do we know if the water is high, I think to myself, other than going down and looking? It was a muddy trail to the lake but the lakeside trail looked dry so we took that. Well, we took it about 500m I should say, until it was about a half meter under water. Change of plans, I think to myself. We then crossed a soggy field and through some thorny bushes to get back on the road for a 4.5km slog. At the next village, where the road met the other end of the trail, I used Google for a better translation of the sign. It said – without any “if’s” in there at all – that the water IS high and the trail impassible. Oh well.

Another story from the walk was when we were heading up a long, arrow-straight logger’s road on one of the longer inclines in a wide clearing. We could easily see hundreds of meters ahead where the road continued into the forest. Half way up the hill, where the forest was a little closer to the path, I saw a meter high stone cairn. I immediately started complaining to Melanie that people have long ago lost the knowledge of how cairns should be used. Back in the day, I explained, cairns were built where the highest point of a trail is over a mountain or pass. They were also supposed to be used to aid navigation, such as to bring attention to a otherwise inconspicuous turn in the trail. Just as we arrived at the cairn, I looked down at it in disgust, then I noticed the red and white blaze on a tree 20m away on the right, down a barely noticeable trail. If not for the cairn, we would have missed the turn. I had to eat all my words.

Another feature of today’s walk was trees that had fallen over the path. I believe they must have had a big storm recently. We are high enough that they had snow here two weeks ago but I don’t know if that was it. We managed to drag one fir tree off to the side of the trail. Another massive tree had its trunk across another portion. I managed to scramble over that with some difficulty while Jerry and Melanie managed to crawl under it with great difficulty. Six one, a half dozen the other. Just after that tree was the branches of the top of a tree across the trail. While Melanie and Jerry navigated a sensible path through the forest around the area, I tried breaking off as many branches as possible to make it easier for others to get through. We all have our parts to play to keep the trail clear. 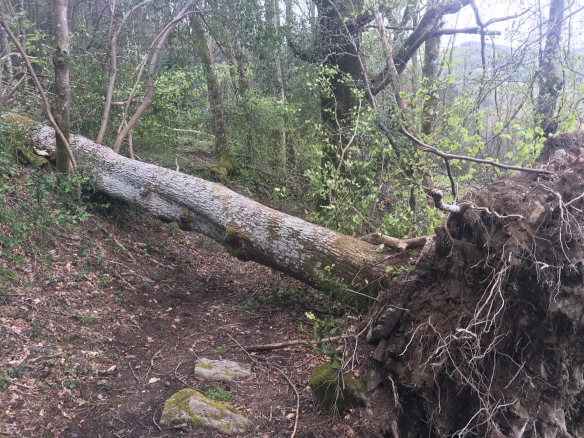 Although we walked “to” Le-Salvetat-sur-Agoût today, we are staying in the lovely chambres d’hôtes Les Trèfles in La Moutouse, 3.9km before Le-Salvetat (despite crappy wi-fi). We decided to stay there because they have a separate home with three bedrooms in it so we are living like royalty. The other pilgrims staying in the gîtes think that we are wasting money but we are happy. It’s about twice as much per person for us than the hostel accommodations but we sleep very well. When we arrived at 1:30pm, after the first 18km, the hostess, Gisèle, allowed us to drop our bags off and then drove us to Le-Salvetat. There, we had a most enjoyable time eating a huge salad at Auberge Des Consuls and hanging out with their entertaining owners. After that, we walked back to La Moutouse. 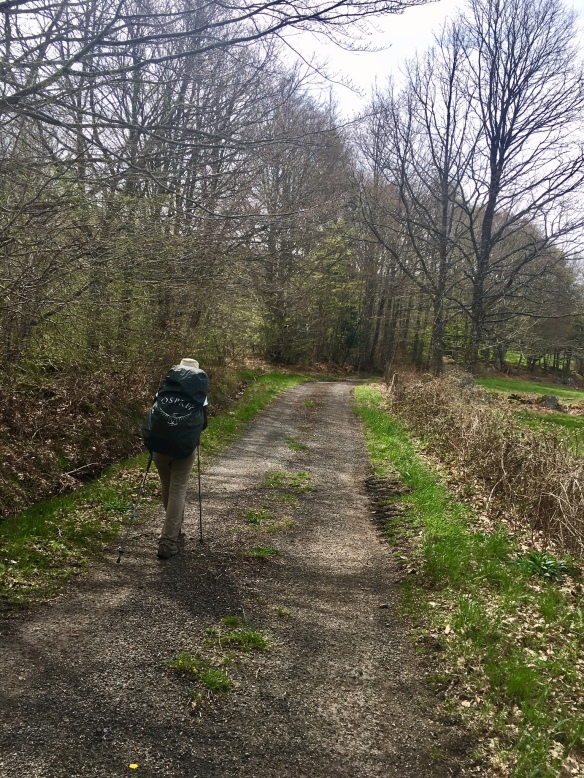 Now why did we do all that? In Le-Salvetat, we understood that they only had gîtes and we wanted to stay in a chambres d’hôtes. More importantly, it meant that Jerry could stop walking today in La Moutouse, enjoying an 18km walk, then get a ride with us tomorrow morning to where we were dropped off in Le-Salvetat and walk another 18km day tomorrow to Angles. He was having none of it though. He insisted on coming with us, just in case the village had a place to get something to eat or drink. La Moutouse is only a hamlet of a half dozen houses so the only food there is at our hosts for dinner. Well, Jerry certainly enjoyed the lunch every bit as much as Melanie and I did but the walk back westwards turned out to be a little error. La Moutouse is 190m higher that Le-Salvetat so we had some unexpected climbs today that should have been nice descents tomorrow. Another “oh well” moment.

Daniel, Anna-Marie and Alain (French Foreign Legion guy) are all staying in the communal room tonight and we just had a very nice dinner with them. The menu included a homemade cherry liquor aperitif, salami and blood sausage appetizer, potato-carrot soup, roasted wild boar with mixed stewed vegetables, and rhubarb-apricot crumble pie. Sounds delicious, no? 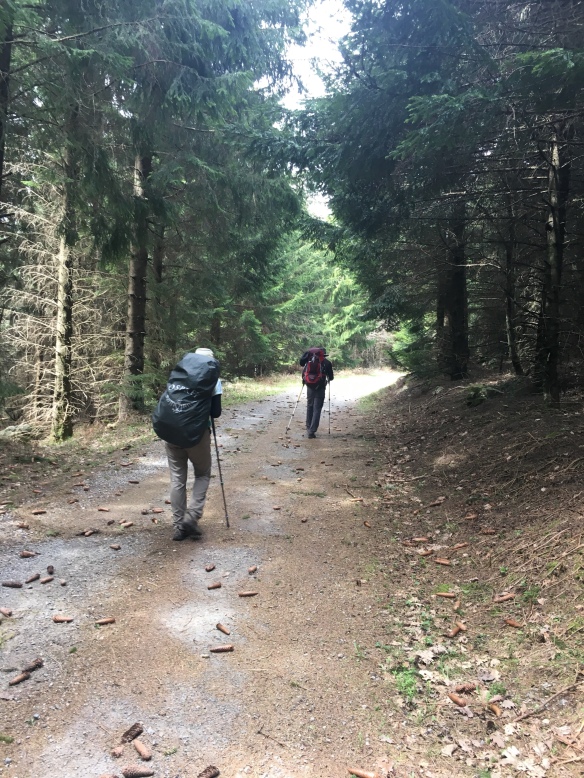 For anyone following us, pray that the lake’s water are not too high. It would have been a good walk. Also, if you are staying in La Moutouse but want to include the walk to Le-Salvetat, walk TO Le-Salvatet and ask for a ride back. It makes a lot of difference going down 200m compared to going up!

It’s bedtime now. I’m sorry there is no wi-fi fo me tonight so I will post tomorrow.

Peace y’all and congratulations to Manchester United for making it to the FA Cup Finals.