Today’s walk was a nice and easy stroll through the hills and suburbs east of Castres. Because of the lower altitude and late start, we had prepared ourselves for a hot day so we were surprised when we stepped out of the hotel door. It was drizzling the finest of mists and the sky looked like all-day gray. We made it about 2m before turning around and going back inside to re-think our clothing.

Melanie put on her jacket and we both got our rain gear to the top of my bag and ready for quick deployment. We were only taking my bag because we needed to take a taxi back from our hotel in Castres to Noailhac where we got picked up from yesterday. Since we were walking back to the hotel in Castres, there was no need to carry full bags.

It took us only about 15 minutes of standing in the town’s only taxi queue to get one of the town’s nine taxis to pick us up. I’m not kidding. A 20 minute ride cost a whopping €25 but I reminded myself that we did have wi-fi last night and a good hotel breakfast this morning. In Noailhac, we visited the village church and town hall to see if we could get a stamp for our credencials but we could not find a soul (except the ones in the adjoining village cemetery.

After less than a kilometer, we were off the road again and climbing nice forest trails while the sky fogged down on us. The weather never got worse than that unless you count the wind that would blow every time we walked under a tree. We got wetter from drips than rain. We were surprised by the steepness of some of the hills but none of the climbs were long. Heck, we were only walking 13km today – no section could be considered “long”.

As with any walk into a larger town, eventually you get hit with road walking. For today though, it was only the last 5km or so on roads that got increasingly busier as we got closer to Castres. It would have been the final 6km on the road but they recently changed the trail to add about 1.3km of trails to replace 1km of road. That was fair.

We didn’t see anyone on the trail today. We had hoped that maybe Daniel and Anne-Marie would have started late from Noailhac because of the rain or that We would see Alain who would have started from Boissezon but we saw no one. Jerry, who decided to sit today’s short stage, ended up walking around Castres all morning and managed to bump into Daniel and Anna-Marie. They were just coming out of a restaurant after very early lunch. Daniel was looking sheepish and muttered something about no one walks in the rain. Jerry said that we took a taxi back to Noailhac to walk this morning and were due back in 30 minutes. Daniel’s sheepish look changed to lambish.

^ One particular suburb of Castres whose name made me giggle.

On the way back to Noailhac this morning in the taxi, Melanie spotted pilgrim gold, I.e., a laundromat. It was only a few hundred meters away from our hotel (on Rue Fuziés, if you happen to be in the neighborhood. After a Portuguese lunch of bacalao #263 (there are 365 ways to prepare bacalao), I washed and dried almost everything that we have used since first stepping on the plane. It may take longer but I can blog while the clothes are in the machines and washing stuff by hand isn’t really as fun as I always made it sound. 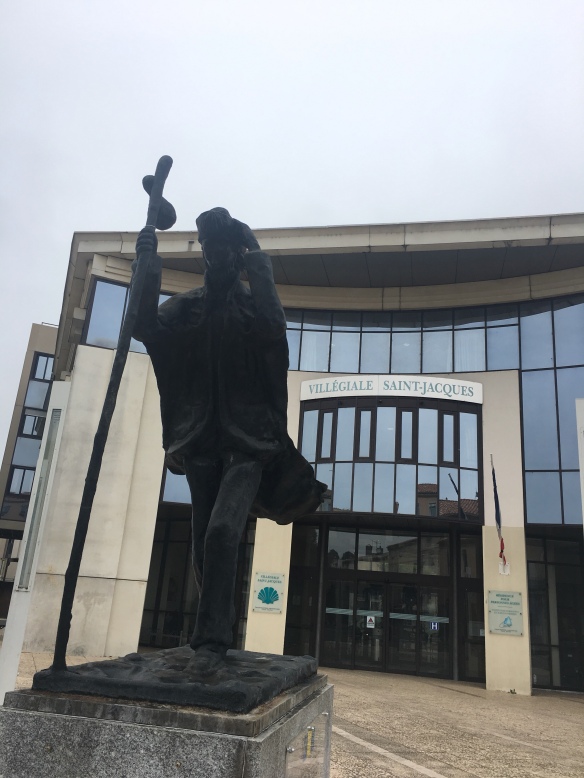 Jerry sorted himself out with a train to Toulouse tomorrow as well as a hotel for a night there. After that, he has tickets to Paris by rail and a flight back to Singapore. He always planned just to do this section with us and other than the three really difficult mountainous days and two short, “who cares” days, he walked every step and incline. Not bad for a former heavy smoking septuagenarian. 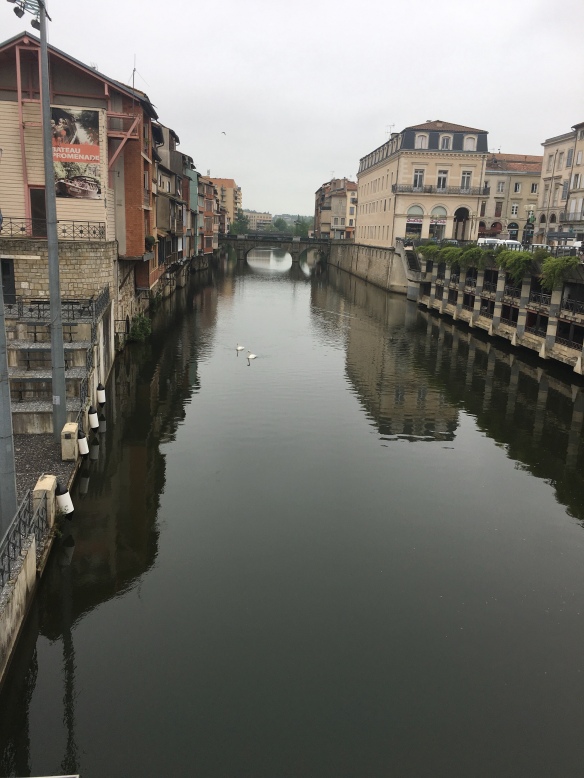 Finally, if I added correctly, we have walked 242.7km since Montpellier. I think that puts us a little over a third of the way to St.-Jean-Pied-de-Port. It’s been a good first portion but I think the flat, hot, possibly rainy, sections are going to start now. Wish us luck.