We are getting into the walking grove but I am swearing off B&Bs forever. What a pain. Today’s walk was almost exactly our target distance and we also had a few small hills in the towns. Our total elevation gain was only 240m but that was condensed into a few locations since the town’s are usually on higher ground. The town’s are many centuries old and the residents have learned about defense as well as protecting against floods.

I miss walking on trails. For the second day in a row, we were almost entirely on hard roads, bike paths or sidewalks. Our 160m shaded grass trail as we entered Bussoleno was a delight that we almost didn’t want to leave. That brought the percentage of road walking down to a more respectable 99.36%. Well, more respectable than 100%.

As we left our B&B from last night, we were greeted by a parade of students and a few workers who had just emerged from the train station. We joined in for a few blocks but then turned west, still greeting all the people we met who were on their way to school or work. We walked on the Strada Antica di Francia (the OLD road to France – let’s just say that someone paved over the prior road due to the chariot grooves) over to the next town, Sant’Ambrogio di Torino, and stopped in the towns church to say a prayer and figure out why the church was named San Giovanni Vincenzo instead of Sant’Ambogio. We at least got the prayer done. 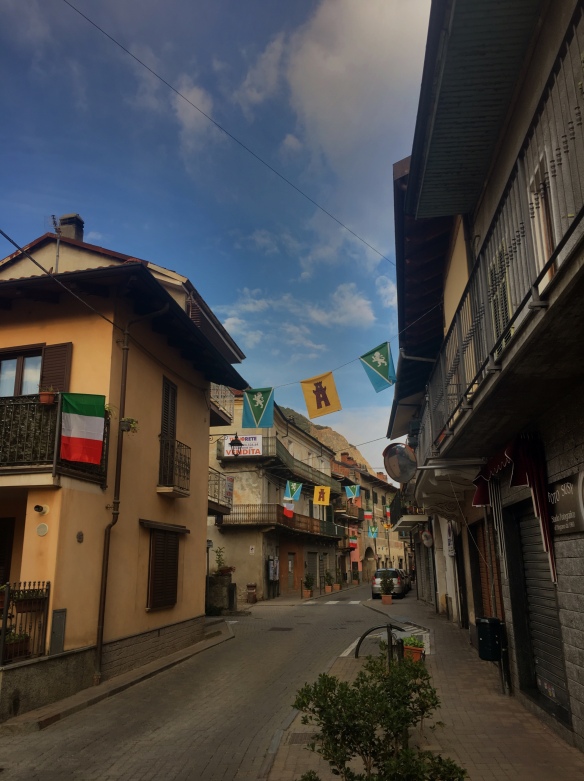 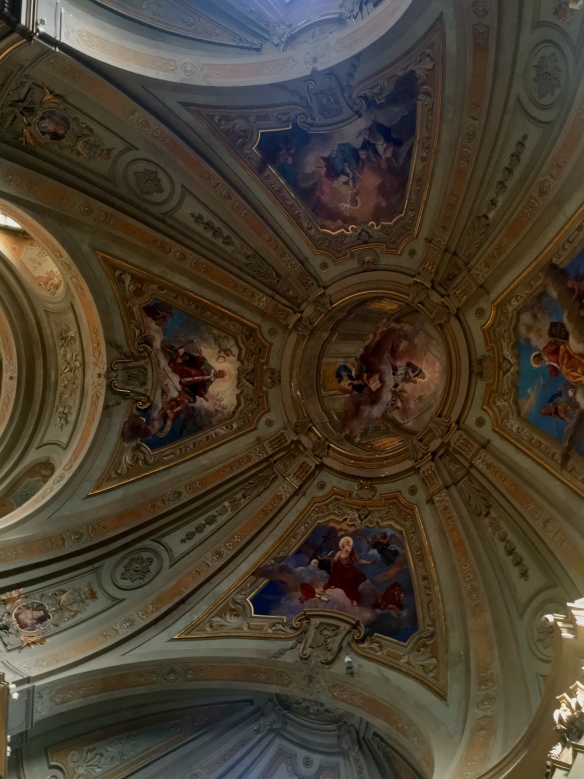 We were then “invited” to “shortcut” over the mountain to the next town, Chiusa di San Michele, via the very impressive Sacre di San Michele. The Sacre could be seen on the mountain top from even before we reached Avigliana. The “shortcut” would have been an extra 2.6km and something like an 550m climb. We declined. Vehemently. Without further consideration or regret. The road around that mountain was along the old road to France that was no longer used except by runners, walkers, hikers and bicyclists. It was flat. And shorter. And enjoyable. 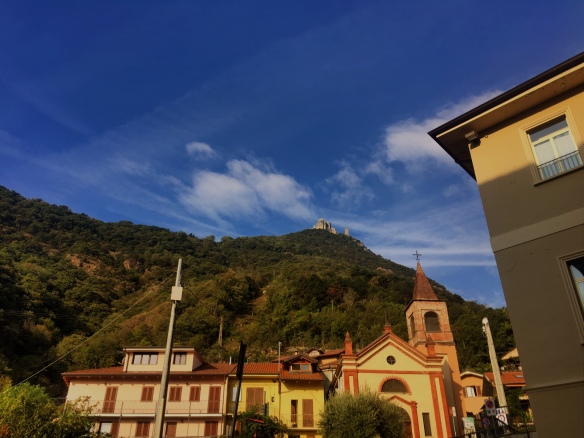 When we reached Chiusa di San Michele, we were stunned to see eight women in their 40’s, 50’s and 60’s coming towards us with full backpacks and walking sticks. We stopped to chat. They were all Italian so, like us, I don’t think they have walked far yet but they were on their way to Rome, about 950km away! Respect! Furthermore, they asked us if we had just come down from seeing the Sacre di San Michele. Errr…. ummmmm…. no, we walked around the mountain. They were going to climb to it though! Respect again!

Shamed, we headed down the decently small and barely used road, Via Roma. ALL roads lead to Rome even if we are going the opposite direction. We arrived in the village of Sant’Antonino di Susa and visited the town’s church which, oddly, was named after the same saint. How novel. Across the square in front of the church was a perfect bar to share a ham and cheese on focaccia and get some lemon soda.

As soon as we were fed and rested, we had a decision to make. We had the GPS markings of two Camino trails. The rest of today’s walk was dependent on which we chose because the trails were different all the way into Bussoleno. One was north of the river, highway and railroad track and the other ran south of those things but was often on a busy road.

At the crossroads where we needed to make the decision, we looked for any trail markings. We found arrows on both trails but leading the opposite direction to Rome. We could only see a single sign pointing towards France and Santiago so, which way to go? We checked the guidebook and it said to take the route north of the river, highway and railroad. It was about 1km longer but on some paths and less busy roads. That settled it, we headed for the bridge over the river… about 300m later, the road was cut off. There was no marked way to cross the rail line and get to the bridge. Here is where I made a mistake. I should have looked at my GPS and figured a way over the rail line. (Note to those following us: use Via Susa and Via XXV Aprile to bypass the blocked road). Instead we headed back and took the southern route.

The route south of the river started as a quiet road, with Camino markings and we met a couple who gave us grapes and apples from their garden. This had to be the best way to go. It wasn’t long though before the Camino arrows pointed another way, into the forested hills. We didn’t have a GPS for this trail and we didn’t want to rely on only the scarce markings. Additionally, it appeared that this new section was likely going to have either steep ascents, steep descents or both and also add several more kilometers to a 25km day. Nope, we turned right and headed for the now busier Via Antica di Francia. We ended up with a 3.5km walk on the busy shoulder-less road. We should not have done that. As it turned out, we were pretty safe but you only need one crazy driver texting or checking Facebook while driving at 80km/hr. The road was mostly straight but occasionally had some scary, blind curves. 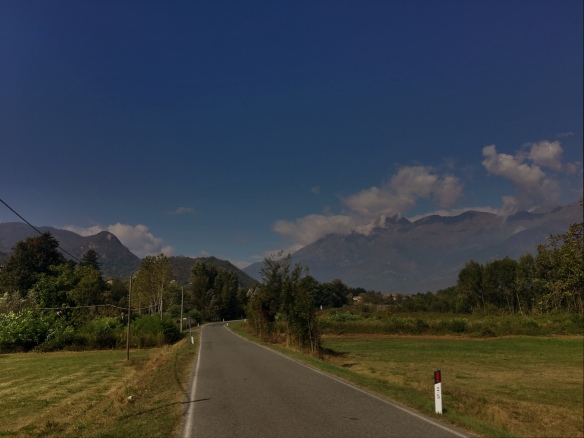 Eventually, we got to Bussoleno via some kinder, smaller roads through San Giorio di Susa and another kilometer of the main road (and don’t forget the 160m grass trail). We wound our way over the river to the exact spot where Booking.com, Google Maps and Maps.me said that our B&B was located. We were told the night before that we had to tell the owner when we planned to arrive. I explained that as we were walking, it was hard to estimate but I said it should be about 3pm. Their reply was “no problem, just give a call or send an e-mail ten minutes before we arrived”. At 2:57pm, I managed to get a phone signal so I sent a message saying that we would be there by 3:15pm. Sure enough, we arrived at 3:10pm so we looked for any sign of a B&B. Nothing. We waited. At 3:30pm we gave up and went to a bar across the street. We asked if they could help and call the owner. Those lovely people were happy to help. The owner told me that she already replied to my message and she would pick us up from the bar and drive us to the apartment at 4pm. Huh? Drive us? 4pm? Aiyoh!

It turns out that this is a regular deal for her. She sends guests to the bar to wait because the actual apartment is almost a half kilometer away on the south side of the river. Also, it’s not a B&B. It’s just a B without wi-fi too (but I knew that part). Other than that, it’s a lovely apartment and the hostess is very nice and helpful… once she arrives.