We are in the mountains now and not quite ready. We had a long, hot, sunny, mountainous walk, interrupted by a pleasant surprise.

The first 10km was pretty much what we were used to, a mix of rural and urban roads almost flat, and 85% on blacktop roads or sidewalks. The rest was rough. We had a total elevation gain of 692m and a loss of 287m with most of both of those changes being quite steep and in 29C (84F) heat.

As last night”s accommodation was a B instead of a B&B, we stopped after only 200m to have breakfast. That provided the first laugh of the day too. I had a donut and some juice and Melanie asked for coffee and “toasta”. The bartender looked confused and asked in English for her to repeat herself so Melanie said she wanted toast, plain toast, nothing on it. The man looked dumbfounded. “Plain toast”, he asked, “with NOTHING else on it”? “Yes”, Melanie replied. A couple of other times in Italy she had asked for toast and ended up getting a grilled ham and cheese sandwich somehow. After a few minutes, the bartender delivered Melanie’s coffee and grilled ham and cheese sandwich and he emphasized “with nothing else on it” so we knew we got the right order. Life on the road, eh?

As we reached the town of Susa, we stopped for breakfast #2 and a toilet break. For those following us, Susa is a historic city and looks like a fantastic place to stop. They still have the old gates of the walled city and a 1,000 year-old cathedral as well as a huge 2,027 year-old arch dedicated to Caesar Augustus.

Up to Susa, we had two GPS trails but it was easy to choose which one to take. The way-marked trail is on quiet rural roads and even a bit of gravel and grass. The alternative was just straight down the main road between Bussoleno and Susa. That would not have been fun. It was at Susa though that we had two vastly different options in GPS trails, one north of the river and another one to the south. It appeared that the southern option was the marked trail so we took that. Holy moly. Who complained about flat road walking before? Not me! Not me! 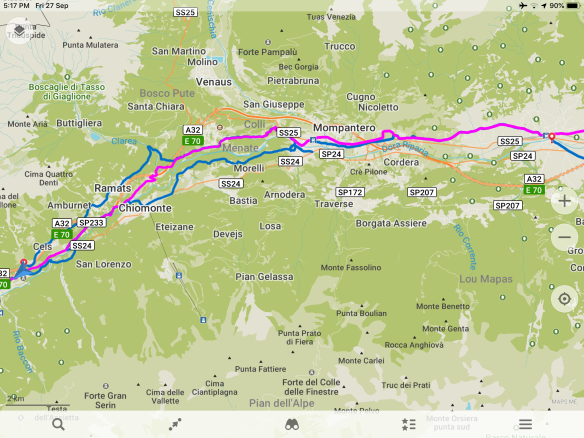 After a quick walk through some nice streets, then along a park that contained the Augustus Arch, we were directed to go up a hill through a gate marked “private – no entrance”. Hmmmm…. lets go anyway since we already climbed a small hill to get to the arch. This was exactly at the 10km point of the day so it was easy to track our progress. This was the start of the mountains and we got shamed. The trail was steep, rocky, and hard to walk on. The first kilometer too us 30 minutes to navigate. The second and third ones were 21 and 22 each. We were dying in the heat. For the first 10km, we averaged about 13.5 minutes/km. This was going to take forever. 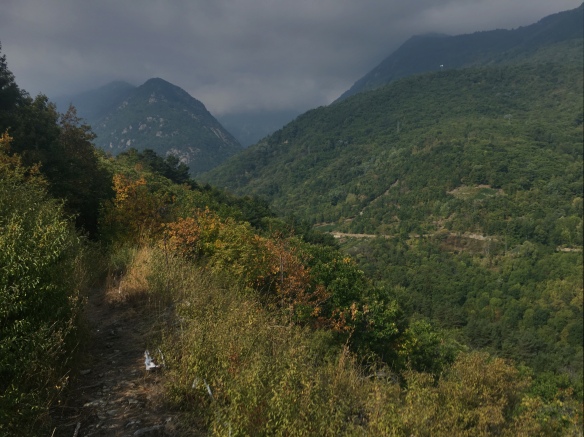 Eventually, we got to a fairly flat gravel road and made good progress for one kilometer. Of course, when I checked my GPS, I realized that that kilometer was on the wrong path. It didn’t matter though because it appear that even though it was longer, it was probably faster than the actual trail.

After about 6.5km of this rough trail walking, we were dumped out onto the main road to Exilles, just before the town of Chiomonte and I almost kissed the road. We had a protected walking lane and life was good. Just a few houses into the outskirts of the small town, we were greeted by a woman with more than the usual “buongiorno”.

This woman, walked quickly through her yard to the gate and asked us inside. She insisted we put our bags on a beach outside the door and to come in. She gave us a large pitcher of cold water and some of the best grapes I’ve tasted. She also offered us coffee, cakes, cookies and I swear she wanted to cook us some pasta too. She wanted to chat. And chat. And chat. She in Italian and Melanie and I in English with an occasional Italian (or French or Spanish) word thrown in for good measure. She asked about our walk, our origins, the weather, etc., then she called her daughter in Turin who spoke English and asked us to repeat everything while she came up with more questions. What a lovely lady! I feared though that we were not going to make it to Exilles. Eventually we left after exchanging addresses and promises to write.

In Chiomonte, the marked trail took some detours that were not on my GPS but wound it’s way through the old town, past the church with the coolest old clock and then down steeply to the river. After all our ascents so far, we just gave up the altitude to cross the river and now we climbed on a road to almost the top of a neighboring mountain. Ughh. What a sunny slog. Eventually we reached the highest point and we were only 1.6km from Exilles by road. Unfortunately, the marked trail said that we should now take a switchback, descend to the the river again, cross it twice, then climb the several hundred meters again. This would have been a steep 2.8km trail. Nah, we took the road. We are not masochists.

After only a few times of hugging the guardrail and praying, we reached the Albergo de Forte, with a beautiful view of Exilles ancient fort in front of us. We blew our budget but after two days at B&Bs with check-in issues, we wanted a hotel with reception. Reception they have! Wi-fi is iffy though. How can we survive??? All is good. Tomorrow will be a very tough day and the following day is scheduled to be over the pass into France and also a challenge. I’m hoping to have time and wi-fi to blog but we’ll see. 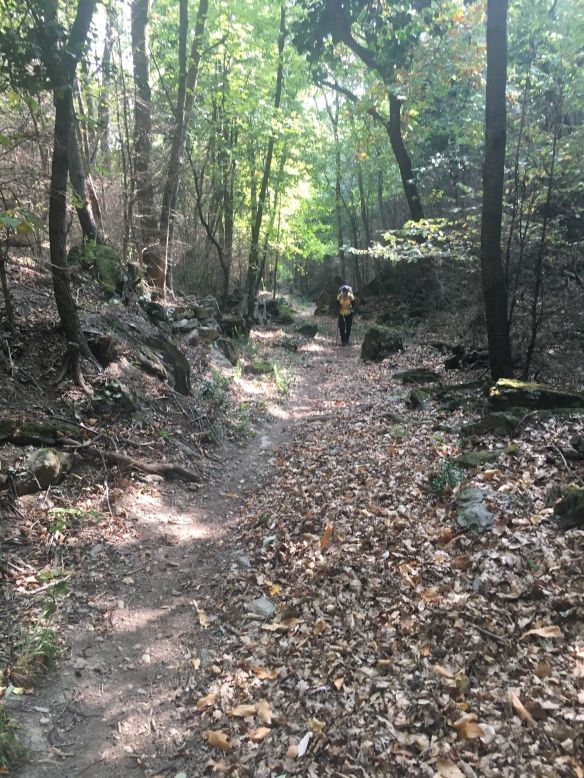 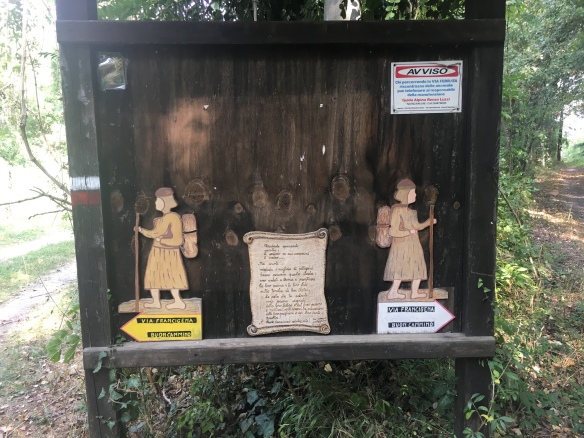