Mostly a very good walk with a special Camino moment thrown in to make it a fantastic day.

Last night, we kept waking up to the sound of thunder and the lashing rain against our window and the roof. We had seen the weather reports from the day before which called for rain today too. We figured our luck had run out on the last day on the Via Domitia (our final four days are on another route). When I checked the weather reports again at 5am though, it said that the chance of rain was supposed to drop to 60% at 8am and 30% at 9am, then cloudy the rest of the morning and sunny in the afternoon. Fortunately, that’s exactly what happened. By the time we started walking at 8:30am, there was still a drizzle and an ominous sky but I only changed hats and put on my pack cover. I didn’t even pull out my raincoat. By 9am, it had stopped raining for the day and the afternoon was as sunny and hot as advertised.

We decided to do as much of the marked GR trail as possible so we walked a little over 2km on roads to the closest point of the Camino. This meant that we were now doing 180m of the climb that we missed yesterday. As soon as we did get to the trail, it was mostly lovely wide mountain trails for the next 6km including a final stop at the cool little Saint-Gabriel chapel. 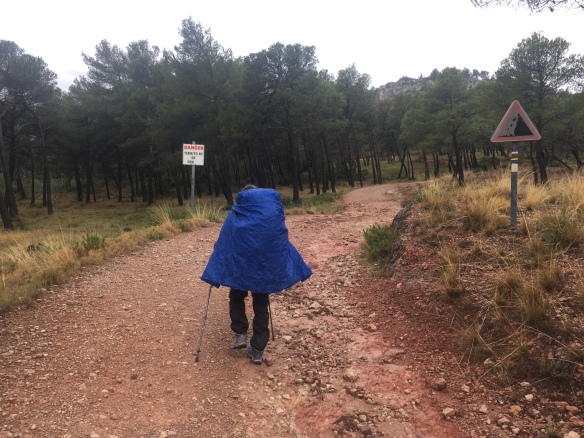 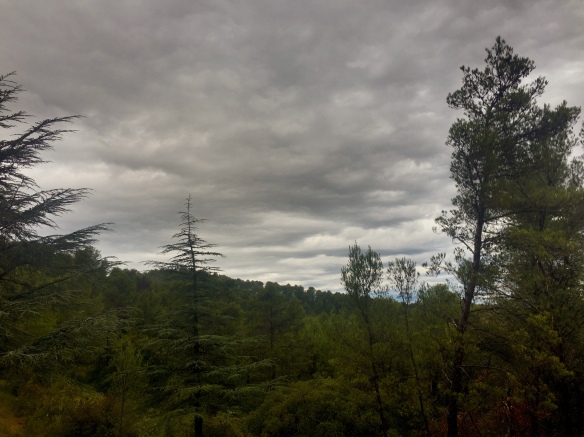 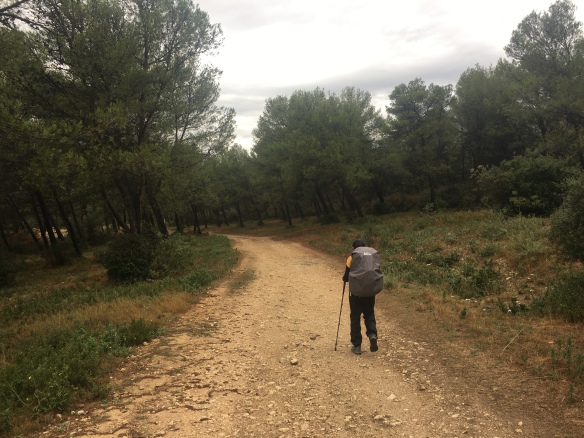 After passing the chapel, we were soon on a busy road heading south but only for a few hundred meters. We were the mercifully directed over to a very quiet road that alternated between blacktop and gravel. The next 5.5km was on these roads all the way into the small village of Fontvieille. We left the GR trail there for a bit to go explore the old town and to get some food. For those wondering, we shared a large avocado salad and a couple of drinks, sitting at a sidewalk cafe, watching the town coming alive for lunch.

Once back on the trail, we had 1km or so of roads to leave the village and not long after we got off the blacktop, I realized that I had made an error. We were supposed to have turned several hundred meters back but I missed it. I huddled with Melanie, looking at the maps.me overview of the area and we decided we were hashers (members of an elite drinking club that sometimes participates in running through the jungle). We were only about 100m away from where we were supposed to be so, as hashers, we just bashed a way through the forest to get there. 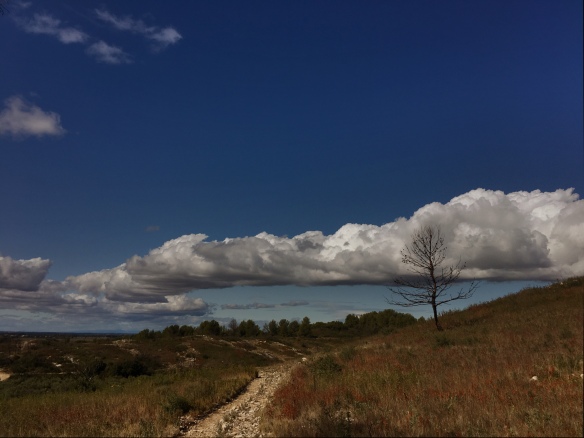 Now on the correct trail, a kilometer of forest trails and another of quiet roads brought us back to the busy D17 for two more kilometers to the Abbaye-de-Montmajour and nearby Chapelle-Sainte-Croix. This is when the Camino magic happened. At the 12th century Chapelle, we found an open gate, ignored the “private” signs and went on the grounds to take a picture. Leading towards the Abbaye, we also saw some huge stone buildings that looked almost as old but they appeared to be more like barns or storage places for farm equipment. I convinced Melanie that we keep going past these towards the Abbaye when we saw a man and and older woman talking. We called out, asking if we were allowed to walk around their small property to the Abbaye. We were told that we could not, and that the bit that we thought was their small property was just the residential part. Their farmland extended hundreds of acres past the fencing around their chateau and we were not supposed to be there. As we quickly made our apologies and turned to leave, the woman asked us to stop. I prepared to be told off for trespassing. “Are you pilgrims?, she asked. Yes. “To Santiago?” Yes again. “With credentials?” Oui, once again. “Well then”, she says, “can I get you some water?” And also, “let me show you a special way”. She walked us a half kilometer down her back driveway, close to the back of the Abbaye property and pointed out the way for the final trail for the last half kilometer to her back gate. Melanie described her as a cross between Audrey Hepburn and Queen Elizabeth II. She chatted with us the whole way, asking about our walk, telling us about the abbey and its history. Everything was in French but spoken so well that we could understand her. As she left us, her simple wish was that when we arrived in Montpellier, we say a prayer for her and she said that she would pray for our safe journey. She was a Camino Angel.

The final 3.5km into Arles was down city streets that were more depressing than anything else, until we reached the northern gate of the old city walls. Our hotel is just inside the wall but once we passed through the gates and wandered around, the city revealed its magic. The small, old, winding lanes contain beautiful architecture. The history of the former Roman settlement hit us almost the same as when we were walking through Rome itself. Tomorrow is a rest day to really explore Arles.

For those following us, I’ll assume that you are stopping in Arles, the end of the GR653d. We still have to get to Montpellier to accomplish our goal of walking from Lisbon to Rome over the course of five Caminos. I will leave you with this advice… don’t think the GR653d and the Via Domitia are the same thing. They are not at all. The GR route just connects many of the bigger towns that the Via Domitia passed through but on routes that are often mountainous, overly difficult, oddly spaced and not really close to the Via Domitia. In fact, the GR route purposely bypasses the best place where you can see the Roman road as well as some of the better Domitia towns like Saint Rémy. It’s even kind of funny that the route ends in Arles, 14km away from where the Via Domitia really crossed the Rhône and continued on, all the way to Narbonne, 143km from Arles. While the GR route can provide stunning landscapes and wonderful trails, there are often more “Camino-like” trails available and I am pretty sure better for the average pilgrim. I suggest that you use the GR route as a guide but look at other sources for other options in order to enjoy your walk more. 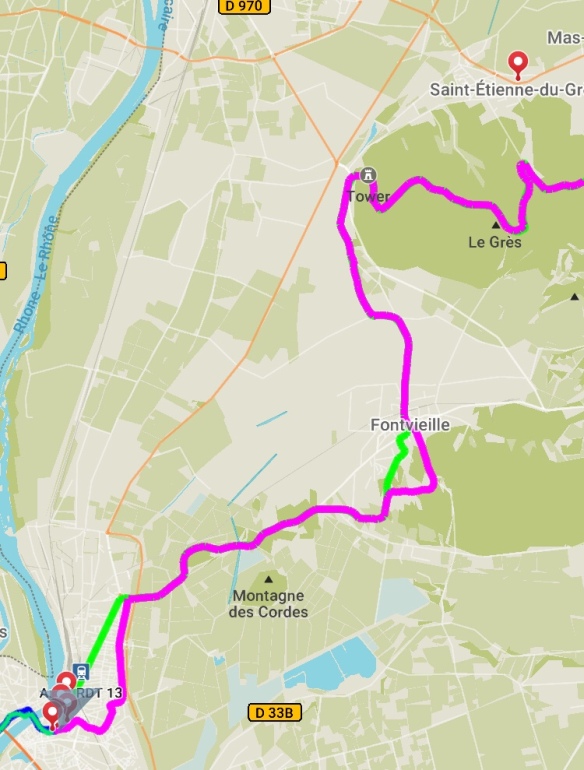 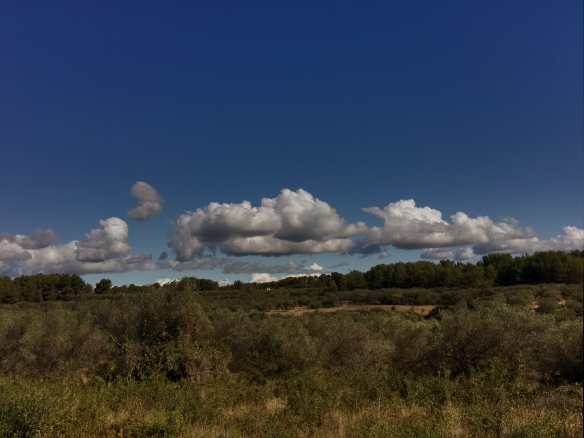