This is a whole new Camino in many ways. By reaching Arles, we are no longer on the Via Domitia Camino. We are now on the Chemin d’Arles for today and the final three days of our walk. These first four days of the Chemin d’Arles are also very, very flat and have relatively short stages. Also, we finally met another pilgrim and nearly got run over by two more on bikes.

Yesterday, the host at the hotel in Arles suggested that we walk along the Petit Rhône River to reach Saint-Gilles. He said it was longer than the official route but most pilgrims prefer it. I checked my guidebook and it actually is a marked alternative Camino route. The main route looked to be entirely on roads while the host said that the trail along the river is very nice on top of the levee, just like outside our hotel. Okay, we were convinced. We plotted a route through Arles’ west bank to get to the river the most convenient and safe way.

Setting off this morning, I would like to say that I had a spring in my step but I really didn’t. Just after we arrived in Arles two days ago, I overstretched my Achilles’ tendon and I have been having problems ever since. Most of the time I don’t notice it and can walk normally but if I step down wrong, I get a shooting pain down there. Thankfully, we have no real issues with hills or trails ahead so we set off “gingerly”.

The first kilometer today was along the Rhône’s levee and the bridge across the river. We passed by several classes of students out for a field trip with their teachers but, otherwise, it was a quiet, peaceful walk. A little excitement arose during the next 2.5km as we walked through the city and suburbs of the newer section of Arles on the other side of the river. At one point, a car that was coming towards us on a narrow street stopped and the driver asked us if we were pilgrims to Saint-Jacques. We said that we were. He told us that we were headed the wrong way and needed to turn around. He pointed out some high trees on the banks of the Petit Rhône, behind some houses and insisted we walk along the river. I knew from my GPS that what he was saying was partially correct but there was apparently no way that I could see on GPS “to get to those trees” without cutting through people’s property. I was sure I had a good route which, until he stopped us in the middle of the street, was a very quiet and nice. He said he knew the route, lived in the area and thought the roads were too dangerous for us. Okay, we’ll give it a try to see if we can find a shortcut to the river even though I was very comfortable with our existing plans. We didn’t wait long for someone else to assist too. As our newest Camino angel pulled away, the guy in the car behind him stopped next to us. He asked if we were pilgrims to Saint-Jacques. “Yes”, again we answered. “And that guy who was ahead of me told you to go this way?”. Yes, that’s right”, we answered. This driver then pointed to his head and said “He’s crazy! You were going the right way. Just keep going down that road, following the minor twists until you see the track next to the river”. That was our plan exactly, we turned to go back. Unfortunately, a third Camino angel popped up just as the second driver pulled away. She was working in her garden next to these other encounters so she came out to explain the route to us… entirely in fast French. I didn’t get much of what she said but there were far too many turn rights, turn lefts, go straights, avoid these roads, etc. In the end, we stuck with our plan and it worked great.

Next up was 13km along the levee, next to the river. Supposedly. In real life, however, we barely caught a few glances of the river. The levee is between 50m and 400m from the river but always with a pretty thick forest between us and the water. It’s okay though, we like the trees and the scenery was wonderful. From the pictures, you might see some similarities of this route to the dreaded ex-rail line, current cyclist track from several days back. They are both very flat, somewhat straight, on raised ground, etc. but there are two huge differences. The most important is the trail material. The railway was covered in bitumen for the cyclists which is very tough for me to walk long distances on. The levee trail was mostly packed earth with a thin layer of very small pebbles on top. It was a dream to walk on. There was also variety too as some areas were more gravelly, grassy or just plain packed earth. That was also helpful. Also, the plants and trees next to this route was much more interesting than the rail line. The 13km passed a lot faster today than half that distance on the rail line would have. 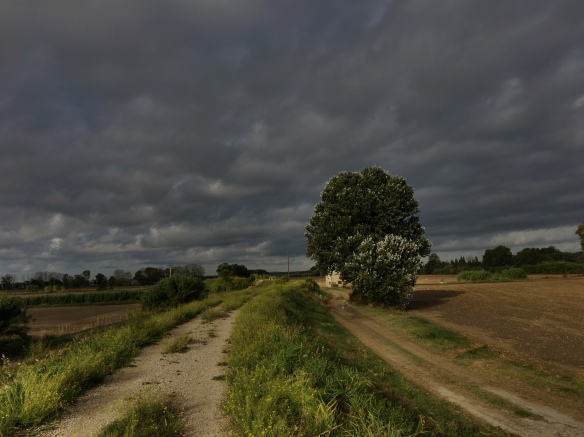 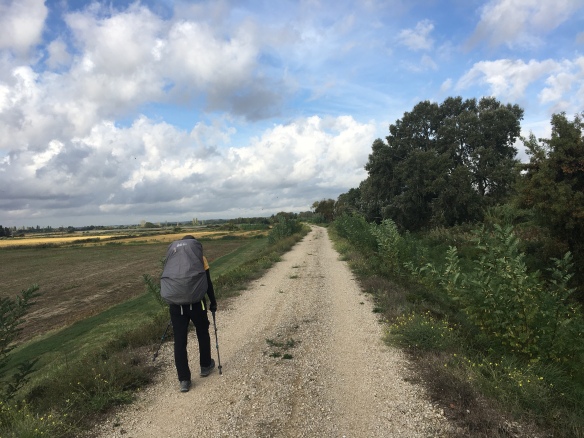 When we finally, and reluctantly finished the levee portion of the walk, we crossed the river…. on a rail line. I kid you not. Thankfully, it was only a 2km section and we walked on the gravel trail next to the line. This brought us back to meet up with the official Camino trail. Before I continue with that though, I was reminded by this rail section of an important lesson I learned as a child. I grew up on the Great Plains of Midwest and our closest neighbor on the next ranch was an old Apache warrior. I was fortunate to be able to hang out with him at times and he taught me some valuable skills that I still use to this day. For example, he said that when he was young, he had to be very careful to stay away from railroads. Apaches knew that railroads brought settlers to their lands and that meant trouble for them. If there was a rail line, they set up their tribe’s village elsewhere. They also knew, however, that some rail lines get built but then later abandoned. If you could tell the difference, it could mean you could settle in more places. He taught me to look at the tracks for any rust on the rails which likely meant the line had been abandoned. If you look closely at the following photo, you may be able to see the rust on the line. That told us right away that we could walk next to the tracks without fear of a passing train. I am so thankful to Running Horse Crap for that lesson.

After the rail line, we were surprised by a walker coming from behind. It was a pilgrim, a real live pilgrim! Our first on this Camino. We walked the final two-ish kilometers into town with him and I learned another life lesson. As always when you meet another pilgrim, you give a little background of yourself, like where you are from, where you started the Camino and plan to end, etc. our new friend, Antonio from Toronto started this morning in Arles and hopes to walk the whole Chemin d’Arles into Spain. We told him of things to expect in the coming weeks, based on last year’s walk, and some things about walking in October in France that we learned this year. He said we must be experienced pilgrims and I faked some modesty and said, “well, yes, we have walked many miles on Camino routes”. A little while later, Antonio mentioned that this was his 17th Camino. Oops. I should not have faked that modesty. One more thing about Antonio though… he was suffering at the end of this walk. He said something like “I was told that today was an easy day” as he huffed and puffed his way up a small incline. That’s what we were like 24 days ago. He’ll be fine soon too.

The other two pilgrims we ran into…. wait….. that is a bad way of putting it. Let me start again. While we were walking along, hearing about Antonio’s Caminos, a heard a noise behind me. I turned my head a bit just as one bicyclist was about to zoom past us. I instinctively jumped back away from him but while still in mid-air, I realized two things. First, I was jumping closer to the path of a second cyclist. Second, I was jumping with almost certain knowledge that when I land, my Achilles’ tendon is going to explode. I landed, bent double in pain and watched as the second cyclist avoided me. As they rode away with nary a glance back, I noticed that they had saddle bags that appeared to be decorated with pilgrim shells. I guess that’s a new record for me, ie., wanting to execute 66.7% of the pilgrims I have met on a Camino. 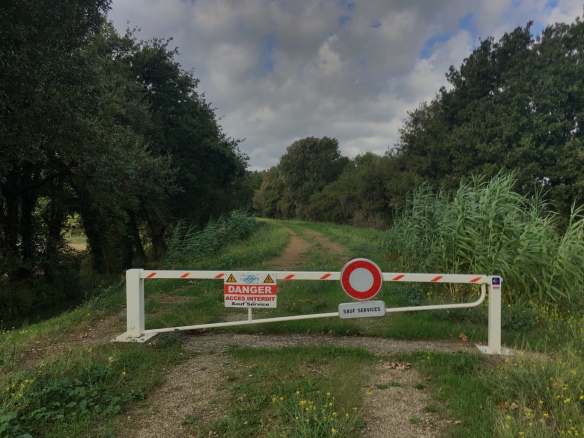 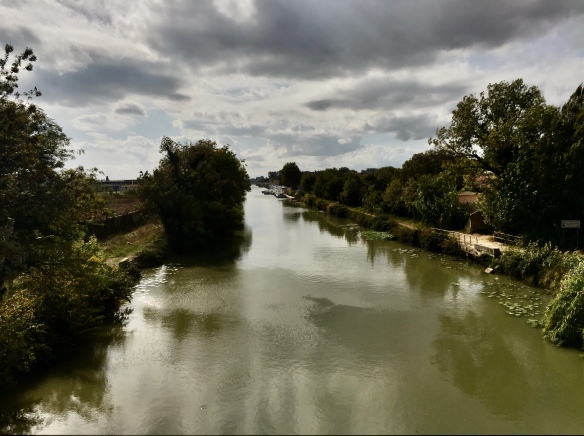