We did it. 656.5km from Vercelli to Montpellier. 3,649km from Lisbon to Rome. I haven’t forgotten about that missing 8km from last year but I’m okay with it. This one was a tough walk but one that we learned how to handle. Overall, we reckon that if we can walk the distance between Lisbon and Rome, other challenges we face in our lives don’t look as daunting.

The weather report for today at 8am said it would be windy and overcast until around 9am then the was a 90% chance of rain throughout the rest of the day. I finally wore rain pants. I even pulled out my raincoat three times when it started to rain. I even put the raincoat on once for ten minutes. It never really rained though. 28 days of dry weather. I never would have believed it. The one part of the weather report that it got right was the wind. It was extremely strong and nearly knocked me over a few times. If anyone sees Melanie flying by, please return her to me

The walk today was like most walks into or out of big cities. It was okay but nothing to write home about so…. 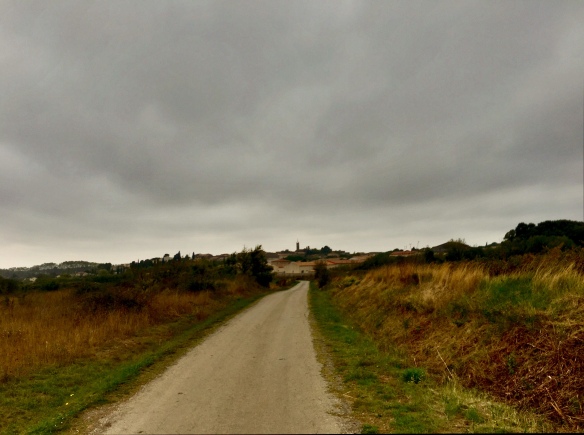 Just kidding. Actually, the trails between Saint-Christol and Saint-Geniès-des-Mourgues were quite nice but those were ones we chose, rather than the marked trail. Our route was slightly more direct than the Camino trail and on less roads. There were also very nice trails between the Mas de Rou winery and Vendargues on the marked Camino. Other than that, it was mostly road walking between fields, in suburbs, in commercial areas or in the city.

We stopped for a drink in a bar Saint-Geniès-des-Mourgues and saw some of the France-Wales rugby game. The place was crowded which must have pissed off the barmaid some because she was pretty rude to us from the get-go. We weren’t offended. Today is our last day walking and we are used to people in the service industry here. It’s like New York City except the waiters have a different accent.

Really, there wasn’t much more to report on the walk today. I apologize for the lack of decent photos today. The phone was often in its waterproof case and there wasn’t that much to photograph anyway. I can definitely report that we were very tired at the end of it. Also, when we finally saw the spires of the cathedral, those last few hundred meters were a lot easier. That said, as we rounded the corner to the cathedral, I was reminded of our start from it last year. Wasn’t this Cathedral rather drab and unwelcoming? Oh yeah, I remember it now. Last year, we did manage to get inside and get a first stamp for our credentials but it seemed like a chore for us and the attendant. Today, the cathedral was locked up tight and every door step was occupied by either homeless people or their belongings. It was pretty bleak but Melanie and I celebrated quietly with a kiss and a hug. We knew that there would be no one here that cared an iota about whether we walked from Vercelli or from the bus stop across the street so we took a picture and got on our way. We have places to go to and things to do. We’ll have our glass of champagne another day. Heck, we need to do another ten Caminos just to catch up to Antonio. The plans are in the making!

Thank you to everyone who has followed the blog, read random posts, left messages of encouragement, etc. it really helps us. Thank you very much as well to all the Camino Angels we met along the way. Just yesterday, the woman from our lodging and the taxi driver were invaluable to us and spoke volumes of the true service standards that can be found here. I’m also reminded of Catherine Hepburn showing us through her farm and Flavia bringing two smelly pilgrims into her home to give us nourishment and a rest. There were dozens of others as well, including hosts Jacky and Lily, Adeline, etc. that helped in other important ways. I may not get into a church in Montpellier but I will be praying for them all for a while. They make the trip special.

For those following us, I promise to upload our GPS waypoints when I get home in a week or so. Some of our alternatives would be appreciated by the average pilgrim. Some of the routes we walked were on new versions of the marked trail too. I suggest that if you are using something like maps.me GPS, having several sets of trail waypoints should help you on your walk. Until then, buen Camino!