Sun baked, well done. That was hard but we’ve done worse. St. Ignatius, what else do you have for us?

We have three ways to follow the path we are supposed to be on. The orange arrows painted on trees, rocks, curbs and lampposts are helpful but not frequent enough and not always positioned where they are needed. The second guide is a written description of the trail along with vital information and photocopied maps. It is sometimes useful but the one-page trail description is too hard to follow for me. It appears incomplete and just wrong at times.  It did tell me that yesterday’s stage ended at the Basilica of Our Lady of the Pillar after 28.8km and that today’s walk was a mere 26km. The final guide is the GPS trail that I downloaded from the Camino website onto my iPhone. I can see on Google maps where I am and where I should be on the trail. I find this option most useful.

Now here is where we got conned today. I had read from the written description that “if your hotel was across town, don’t forget to add about 3km to today’s total distance”. Fair enough but I stayed just around the corner from the Basilica so I was fine, right?  Well….. when I opened the app for the GPS this morning, the trail only started 3.5km southeast of where it stopped last night!!! At 8:45am, I just figured out that today’s walk was going to be closer to that dreaded 30km mark, in the blazing sun, with no shade anywhere, with no breeze stronger than baby’s fart and with 13km between the last place to get water or food and the final destination. As expected, it turned out to be a pretty brutal last four kilometers. 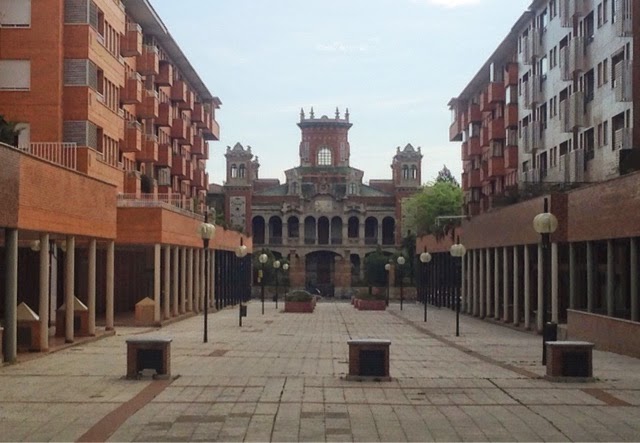 All that said, it was an interesting walk today. We had a few kilometers of walking through the beautiful streets of Zaragoza, several kilometers along an ugly highway out of town, and lots of rocky dirt tracks though farmland and industrial estates. I was fairly flat but, as noted, very sunny, hot and shadeless. Mountain ranges in the distance as well as the wildflowers made some sections lovely.

Before leaving town, we had an interesting encounter. We saw a fruit and vegetable store open and I’ve learned not to pass those unless we have all that we need for a few days. You never know when there is another one opened. In this small store, we stood in a queue behind three other people to buy a couple of pears. It turned out that their shopping lists were longer than my patience… 6 asparagus, 3 white onions, 8 carrots, 3 golden apples, 5 Granny Smith apples, and on and on and on. And that was just the guy in front. The other two people had longer lists in their hands and carts ready to wheel everything out.  Three more similar customers queued up behind me too.  The Spanish woman who was the lone worker in the store tried her best to be fast but we gave up and left. Amazingly, just two doors further away, we found another fruit and vegetable store that was bigger, had a better selection and lower prices – and not a single customer. I enjoyed chatting with the owner there while buying our pears but was saddened by why I thought he had no business. He was a Muslim immigrant from Pakistan. 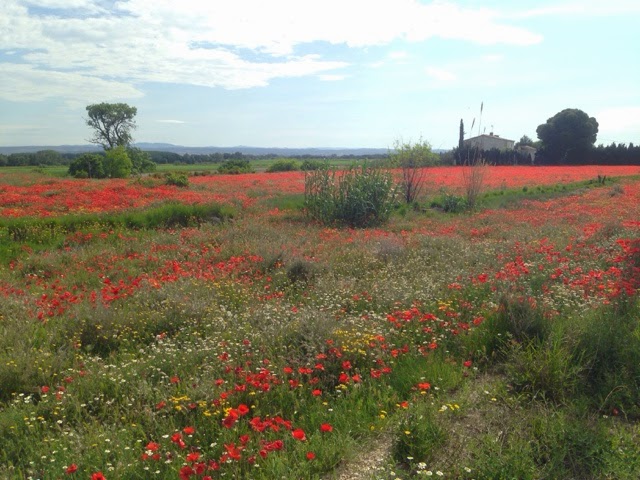 In the town of Cartuja Blanca, after 8km, we stopped for a light bite and toilet break. I’m again getting addicted to Fanta and Kaz Limón and tortillas (scrambled egg with potatoes pie). After every Camino, I have to go into rehab. 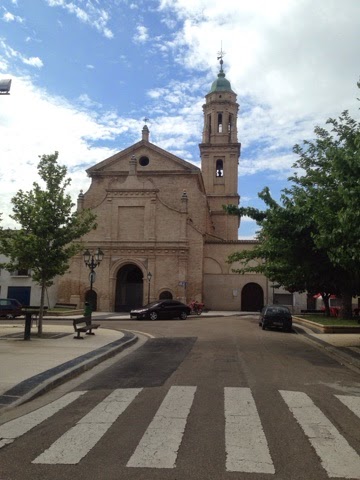 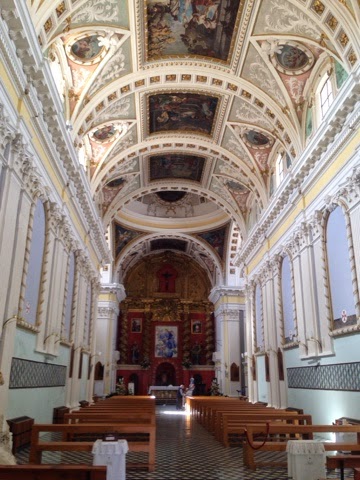 In Burgo de Ebro, after about 17km, we stopped for lunch. Melanie had self control and the salad mixta. In homage to the town, I had my first hamburgesa since arriving in Spain – this awesome monster burger had a well cooked handmade beef pattie, great cheese, a perfectly fried egg, ham, tomatoes and pickles.  It wasn’t very American, served on bread rather than a bun but it was gooooood! 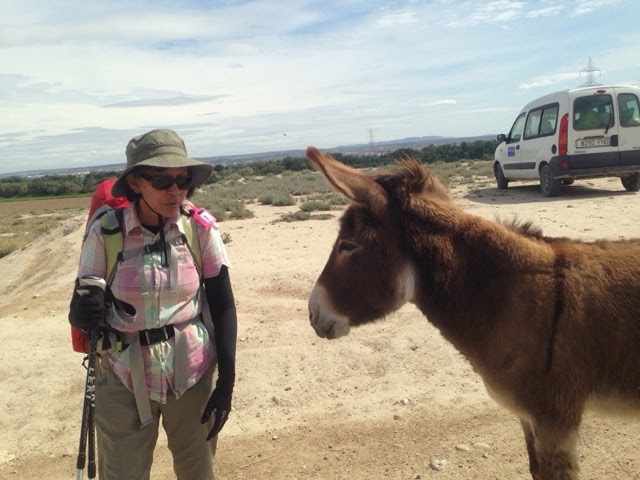 While at lunch, we met a Swede who was also walking the Camino Ignaciano. He apparently started two days earlier than we did but took extra days in Logroño and Zaragoza so we have caught up to him today. We expect to see more of him in the next few days. We’re saving our rest days for when we really need the break. If we don’t need them, we can stay an extra day in Monserrat, Manresa and Barcelona. 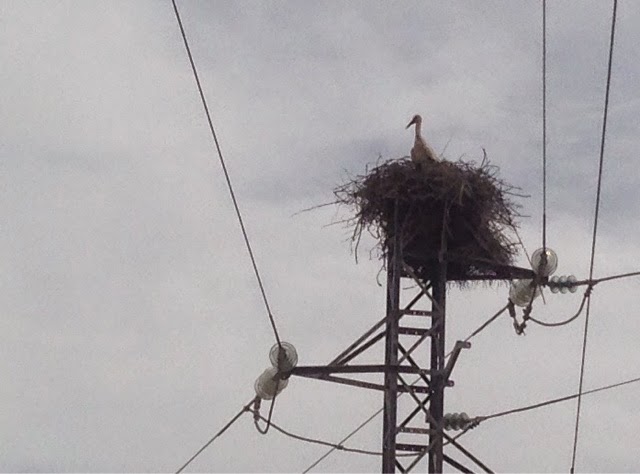 We also met three Belgian men walking from Monserrat to Santiago de Compostela.  They were already celebrating getting through the desert by having large beers for lunch with still so far to walk. Good on them but I hope they make it.

An interesting note about the Swede: he told me that he can’t figure out how to use the GPS tracks so he is only using the written description and arrows. He admitted that it is tough and he has made mistakes causing extra mileage but he is proving it is possible. 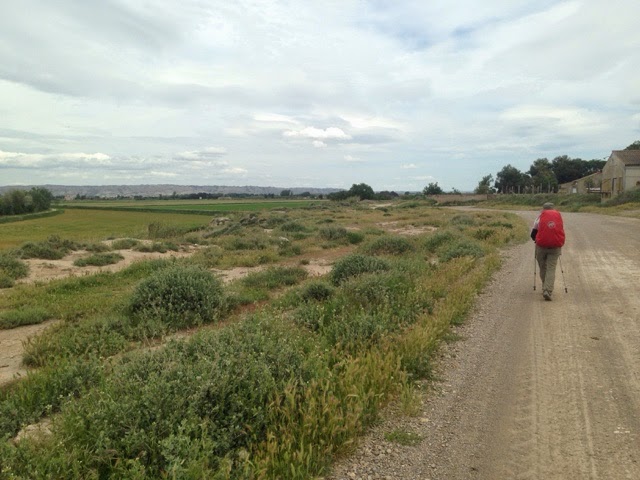 As always on the Camino, we find great joy in simple pleasures. You have to walk to appreciate it but we really do get excited about simple things like taking off our shoes, taking a hot shower, putting on dry clothes and seeing in the distance the town of your final destination for the day. On days like today, finding a park bench in the shade or even a cloud passing overhead can send my heart into cartwheels. When I’m not walking, I probably have a lot more reasons to be happy but I just don’t realize it all the time or the individual things just don’t stand out enough. Hmmmm… Something to think about during tomorrow’s walk.

We’re off to dinner early tonight – we hope to find a place already open by the ridiculously early hour of 8:30pm. Wish us luck. (Edited to note, we ate in our hostal, Hostal San Miguel. The food was outstanding!  The appetizer was a plate of thinly sliced zucchini with salmon, blue cheese and a sauce – out of this world! And we’re even finished by 9:30!)