Skip to primary content
Another wonderful day of walking with beauty all around us and a few challenges thrown in to make it all even more interesting. 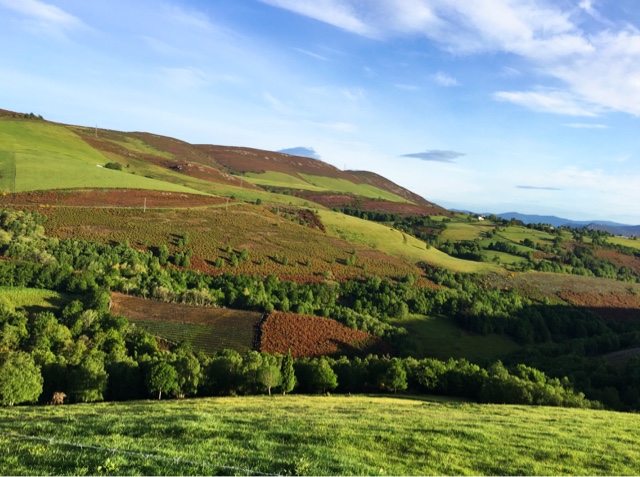 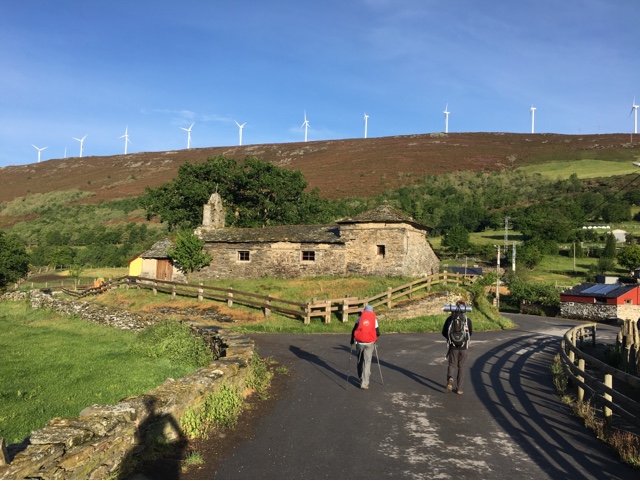 We started out the day by walking the wrong direction, to get back to the albergue / bar for some breakfast.  With it being Sunday, there would be no other place open to eat for at least 14km.  Melanie needs her coffee.  The bar was very busy so Melanie graciously but reluctantly went without tostadas as it would have meant a further delay in leaving.  I was anxious to leave because Castro only has one small albergue but it was supposed to have a casa rural too.  Our friends were all making reservations at the albergue but we could not get an answer at the casa rural for a private room.  If we arrived and the casa rural was closed or full, the albergue may also be full.  More on that issue later. 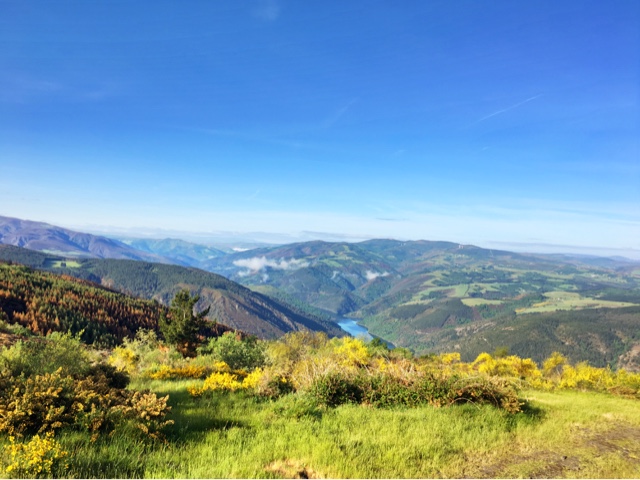 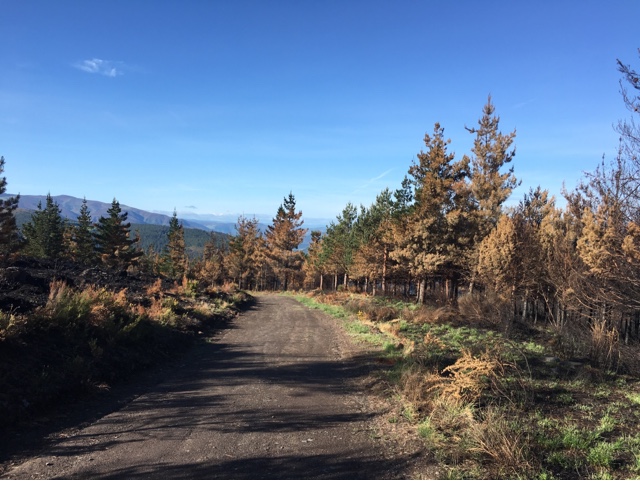 When we did get off at 7:30am, we had an immediate steep climb up a rocky path that woke us up even more than the coffee did.  There was then a short easy walk on the path and road to La Mesa, where on other days, we might have found a bar.  I think the bar man is also the priest though, so he had other duties on this Sunday.  The problem with the walk down the road to La Mesa though was that we could see pilgrims climbing the mountain on the other side of the small valley.  We expected some climb but not this one.  It was a very steep, long, straight climb that had to be 200m over about 1km.  We started at the bottom with Janek, Marthe and the two Polish girls, Dominika and whatshername.  They all were out of sight by the time I had the energy to lift my head.  The hill climbed to the windmills on top of the mountain but despite the cold wind blowing and the sweat dripping down my back, I knew what was next. 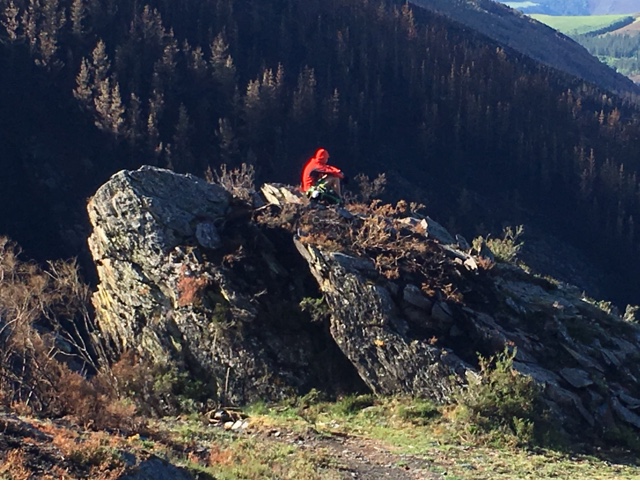 Jens, taking a moment to contemplate the pending end to his 90 day walk. 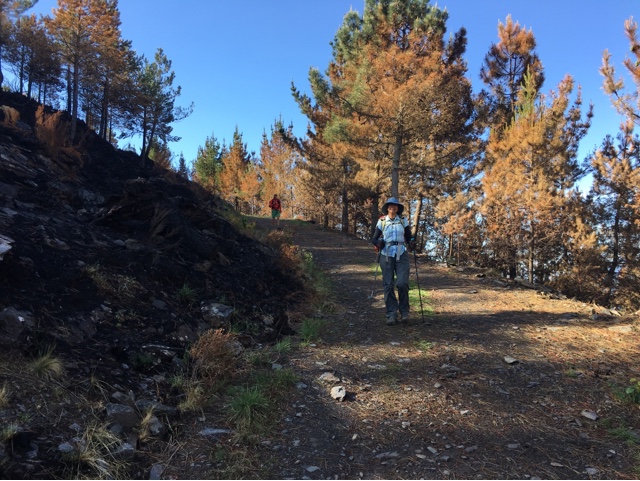 We didn’t stay that high for long.  The descent started almost immediately and it was going to take us from 1,100m to 200m over only 6km.  At first, the views down to the dammed lake in the valley and the mountains beyond were breath-taking.  It wasn’t long though before we realised what was wrong with the picture.  There had been forest fires in the area and we were going to descent straight though a burnt out forest.  Almost all the trees were still standing and many were only partially burnt but it was pretty devastating.  That said, there was still a lot of beauty in the woods and everyone mentioned that the smell actually brought back good memories of scouting camp, hunting trips, family fireplaces, etc.  The other thing to mention about this descent was the numerous switchbacks all the way down.  As the crow flies, it’s about 12km between Berducedo and Castro.  All the zigzagging down the hill made up much of the added difference. 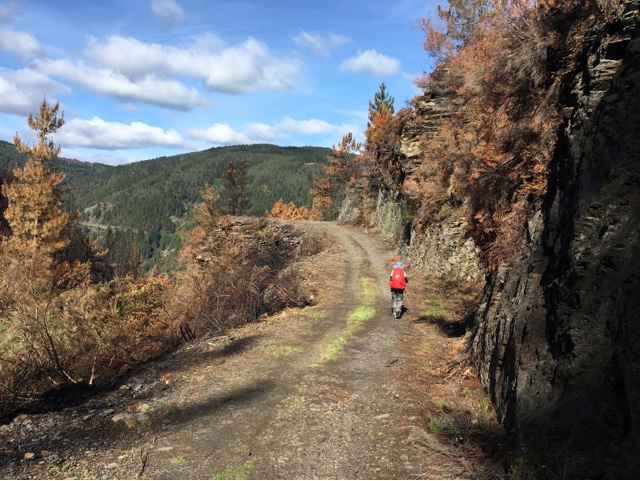 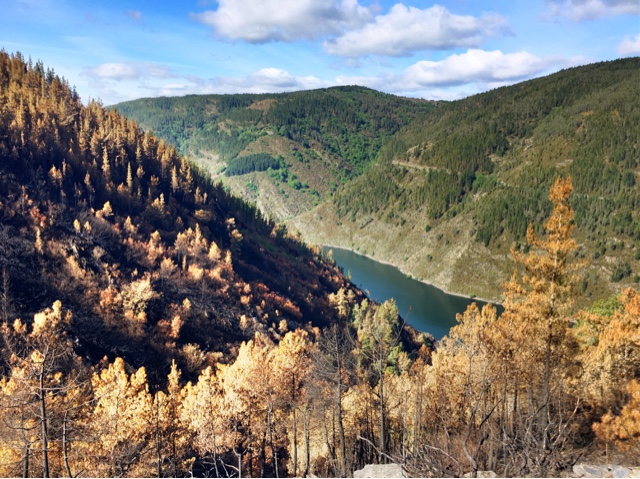 Another reason for the longer distance travelled between the two towns is because of the lake we had to walk around.  There is a dam on the river that I am petty sure was built by the hoteliers in Grandas de Salime.  They knew that the Camino Primitivo passed through their town but that their town was too close to the first stop after the Hospitales route so no one would be stopping in Grandas.  I am sure they funded the dam to make the distance with the detour around the lake a respectable 19.6km after Berducedo. 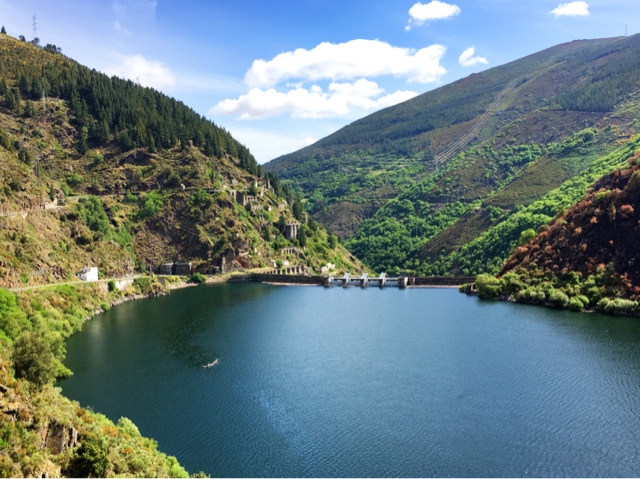 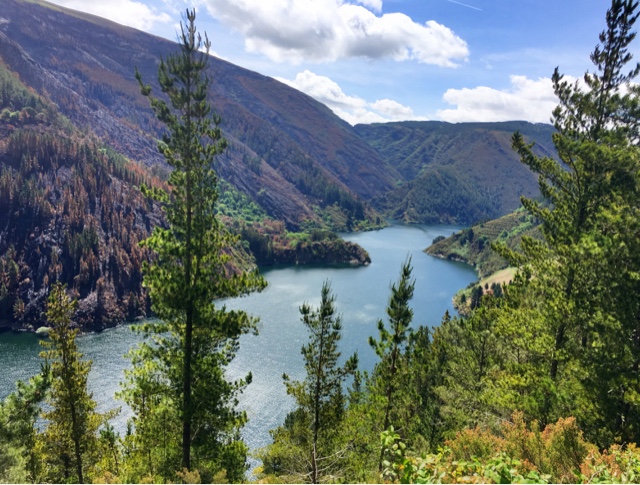 Overlooking the dam from the further side, we found a nice family run bar and restaurant where Melanie and I stopped for a quick lunch. Fr. Bart, Janek and Marthe where all there along with Canadian Natalie, two Germans that we have seen before and a dozen other pilgrims that we didn’t know.  This is Marthe’s last day on the Camino as she has to get back to Oviedo for an exam.  It was good to spend some time with her.  Alas, poor Janek, I knew him well….. enough to know that he will be crying all day tomorrow.  (Any Shakespeare fans out there?) 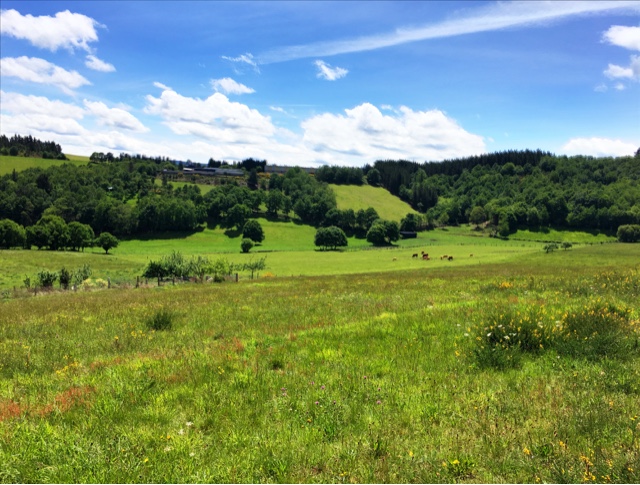 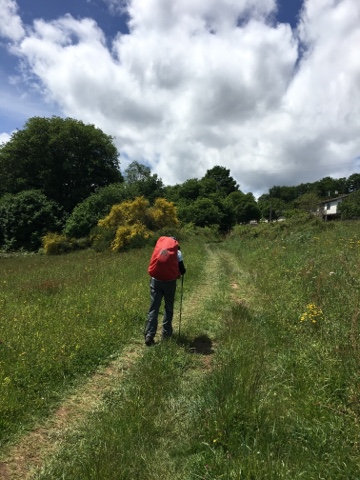 After lunch, we had a 350m climb that wasn’t as steep as this morning’s climb.  It was fairly constant up along 7km to Grandas de Salime but also mostly along side of the road.  The last kilometre into Grandas was a pretty forest walk though.  An added bonus of getting there was that we met up again with Janek and Marthe.  Did I mention that they seem to have become a Camino couple in the last few days?  They were sitting on the steps of the albergue, waiting for it to open.  She was going to take a bus from Grandas early in the morning so she had to stay there.  Janek was keeping her company (and tearing up) until the place opened.  When we came into town, they decided to go have a soda with us and the Polish girls who also just arrived at the bar.  While at the bar, Marthe decided to walk to Castro for one last night together and she would arrange a very early taxi from there to the bus.  Love wins! 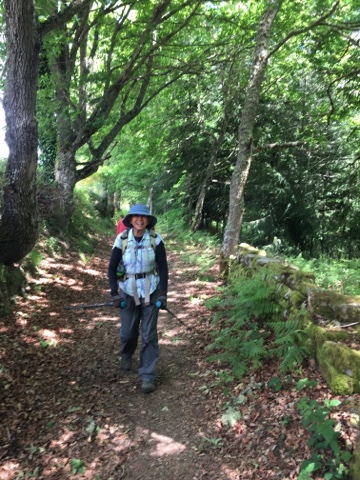 The walk from Grandas to Castro mostly paralleled the road but had to have the worst trail markings we have seen on this Camino yet.  It appeared to be marked in neon green spray paint, often in confusing patterns.  It sometimes contradicted the few official markers and the use of plastic police tape tied to branches further confused things.  There were at least two places where we also had to search a few directions before finding the next marker. 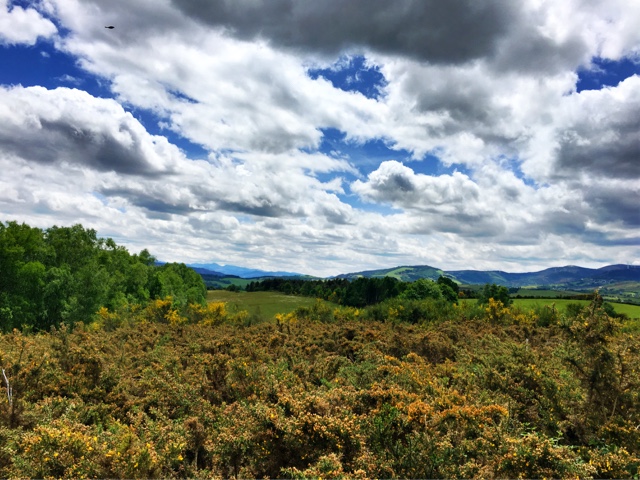 Once in Castro, we passed by the albergue after talking briefly to Jens, Bart and the three French (including the one whose life we “saved”???? by walking next to him a few days ago).  We walked another 200m to the casa rural advertised in Gronze as having private rooms.  Well, they may have private rooms but, as we sadly found out, they are now closed as an albergue.  No wonder they didn’t answer the phone.  We walked back to the other albergue where our friends had reservations but they only had one bed available.  The hospitalera told us of a new casa rural 100m away but they were full for he night.  This unholy family had no place to lay their head.  We went back to our friend’s albergue and asked the hospitalera if I could sleep on the floor.  Absolutely not.  Fortunately, we are not on a 25€ daily budget because the next solution was to call a taxi to take us to tomorrow’s destination of A Fonsagrada.  I then called and arranged a pensión there for two nights so tomorrow morning, we will take an early taxi back to Castro and walk back where we are now.  It’s an expensive option with two 20€ taxi rides but it’s better than Melanie taking the last bed and me sleeping on the steps of the church.  Now, if only Melanie would sleep at the church…. And just in case Marthe ever reads this, I forgive you for taking the second to the last bed with your called-in reservation. :p 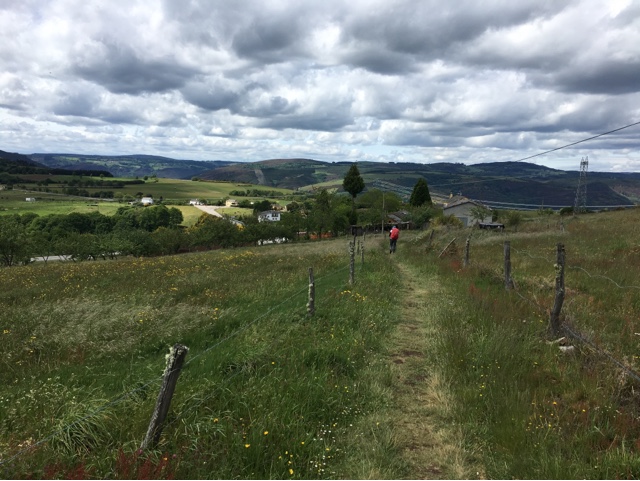 If you ever get to A Fonsagrada, the Pensión Casa Manolo is pretty decent at 40€ for a couple including breakfast.  They also have good pilgrim meals at dinner time, well, at least Spanish dinner time.  We are here tonight with at least eight French and three Germans pilgrims who must all have been a day before us for some time.  I miss our gang.
Peace y’all.