Skip to primary content
Today felt like a holiday for me.  Melanie will disagree with that assessment entirely but she still had a relatively easy day.  It all started with an early breakfast of tostadas and coffee for Melanie and an orange juice and chocolate brioche for me.  If that isn’t the breakfast of champions, I don’t know what is.  We were out the door right at 7:00pm but not in the usual way.  First we sat in the taxi that took us back to Castro where we ended our walk yesterday. 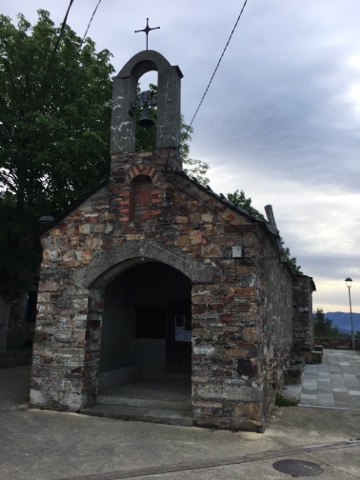 Now it may seem weird but I have to talk about the taxi ride a bit because it’s not so normal for us.  We have now taken two boat ferries and a 1km train ride since we started walking.  To get from Bilbao airport to town and then to Irun, we travelled by bus.  It was way back on 17 April in Singapore when we were last in a car or a taxi.  As we rode from Castro to A Fonsagrada last night, and the reverse direction this morning, we just kept thinking to ourselves, really?  We are going to walk all this way today?  It’s also 22km and about 25 minutes by car back to Castro and we saw where the Camino crosses the road many times.  Really, we are walking THIS? And this is a short day too!  What are we doing? 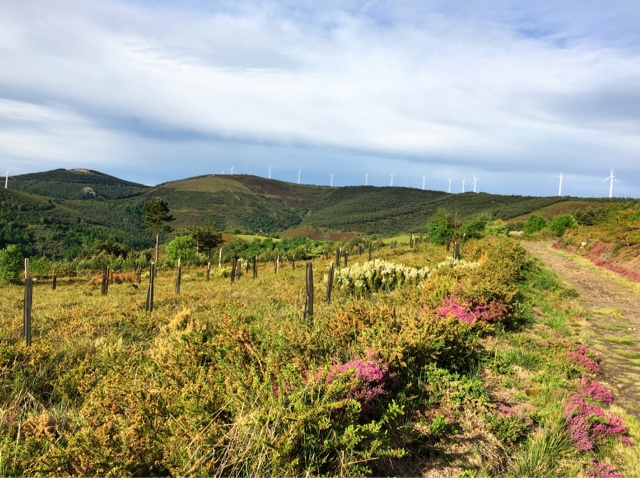 Eventually, we did get to the albergue in Castro and took a photo for proof in case anyone doubted us.  I think I did that because the same pilgrim who saw us get out of the taxi last night at the A Fonsagrada pensión, saw us getting into a taxi this morning.  He must be doubting our pilgrimage.  We thought briefly about going in to see if our friends had left the albergue yet but decided that we should just start walking.  Now, today did not have the overwhelming beauty or physical challenges of previous days but it was very good anyway. 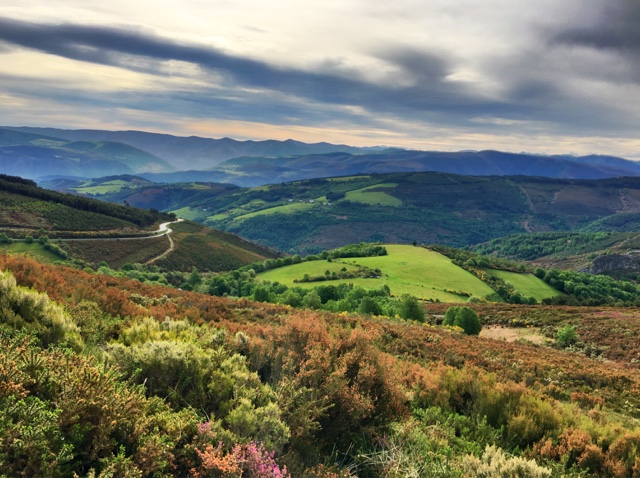 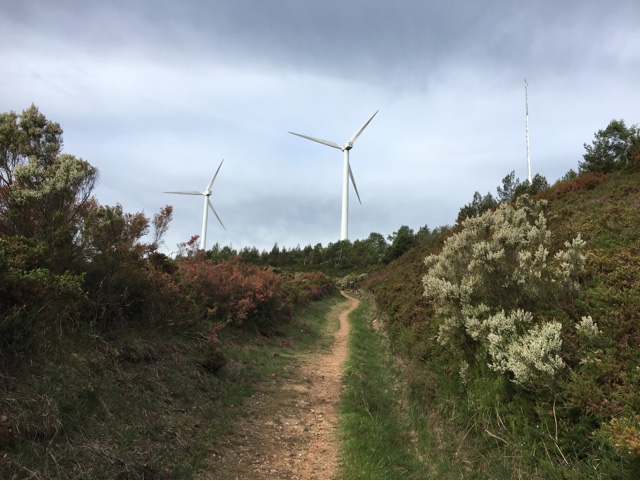 Before I go further, I should mention that because we were staying in the same pensión two nights in a row, I took all of my spare clothes, my dop kit, my sleeping sack and the guidebook OUT of my backpack before walking.  I left them behind at the hotel to save carrying them today.  Melanie, on the other hand, packed every single thing she owned in Spain and carried it with her.  She doesn’t want anyone saying that she took an easy option.  That was even more impressive (or crazy) than obvious because she was also feeling unwell this morning after having coughing fits all through the night. 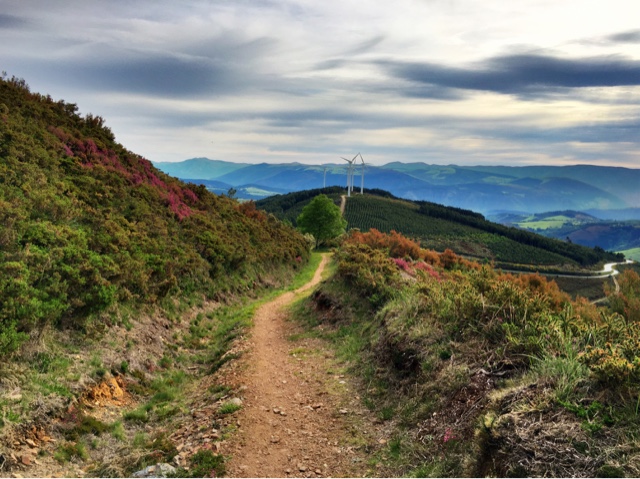 The walk took us through the small village of Castro – our fifth time through it – and almost immediately started climbing 500m over 9km.  It wasn’t difficult at all but I would not have said that three weeks ago.  As we continued climbing towards the windmills on the 1,200m mountaintop, I heard a familiar voice behind me.  Jens said a quick hello but kept walking rather fast past me, looking over his shoulder.  I thought something was wrong.  A few minutes later, Janek passed me quickly too and apologised for not slowing to talk.  He told me that he and Jens were racing today.  Poor Janek, Jens has had almost three months of training.  He had no chance. 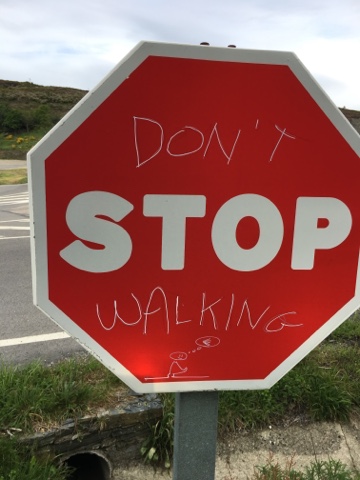 Once over the mountain top, past the line of windmills, we started to descend but we only got to go down a slow 300m the rest of the way.  Just after starting the descent though, we did reach another milestone.  We left Asturias and we are now, officially, in Galicia. From France, through the Basque Country, through Cantabria, through Asturias – we are ticking them off like flies. 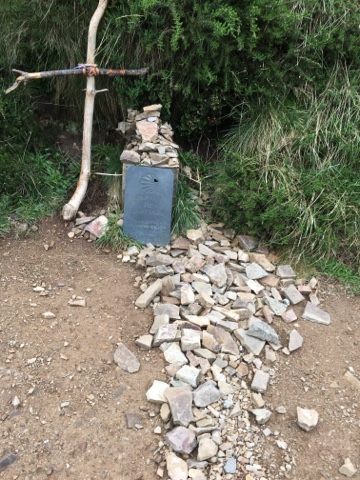 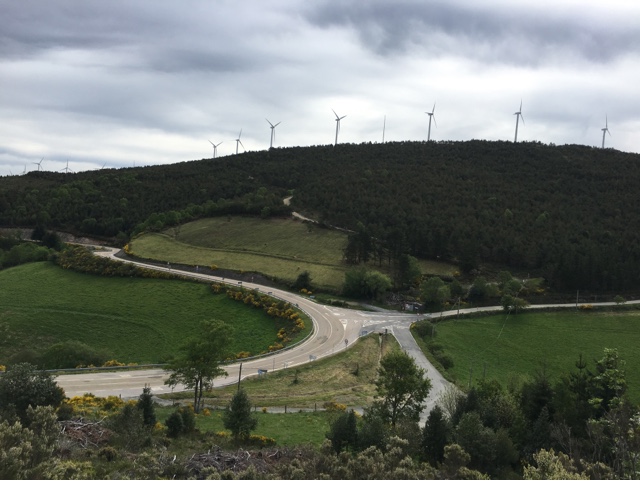 Climbing down into Galicia, we had a hearty welcome at the bottom of the hill at the pub, Casa de Acebo.  This little pub would be a great place to have a drink or a snack no matter where it was but it happened to be to only place to get refreshments on the Camino today.  The guy who runs it is a nice old man who loves to collect, display and talk about watches, tankards, saints’ pictures, old photographs, old bottles of alcohol…. you name it, his pub was decorated with it.  We had a snack break there with Bart and the two small French women who we have seen over the past several days since Campiello – our first tarta de Santiago cake so far this trip but not our last. 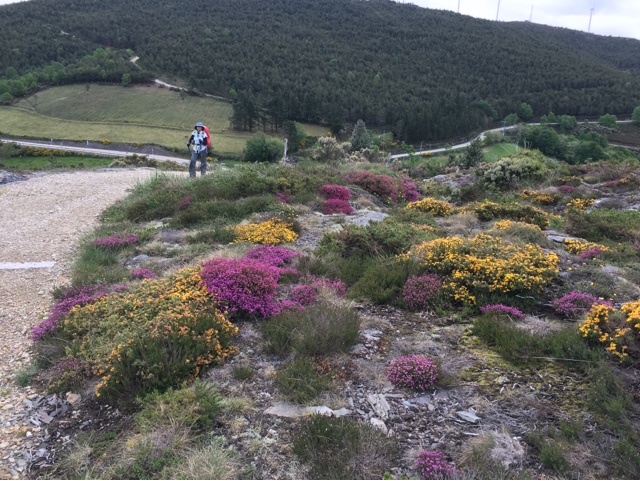 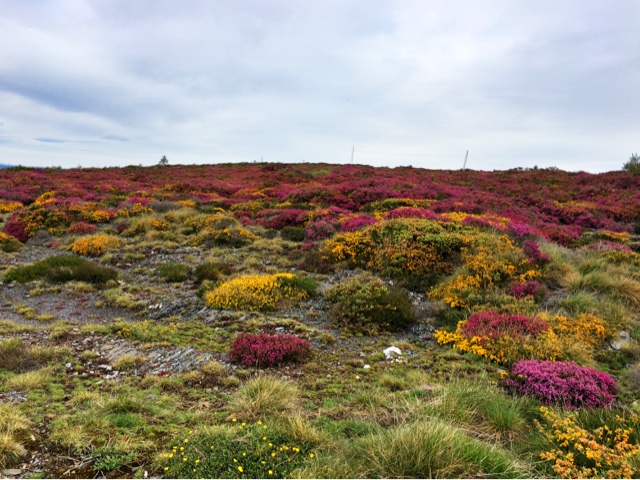 From there, we usually were closer to the road to A Fonsagrada but almost always on a nice, easy-on-the-feet gravel path that the Tourism folks from Galicia have installed for pilgrims.  The guidebook describes the second half of the walk as not as nice as the first but that does disservice to a very nice walk and path.  Along these paths, we spotted the Polish girls, Dominika and Agatha.  Agatha is nursing a really bad knee so she is walking without a backpack and slower than even I walk.  They tend to almost catch up to us on up hills but then fall behind on downhills when we run.  Or trip them. 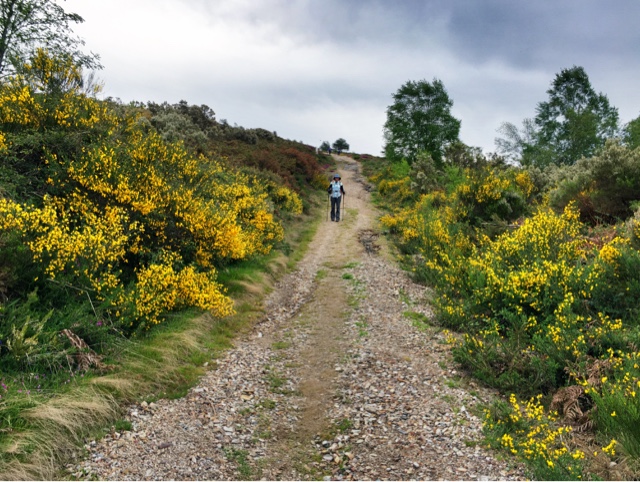 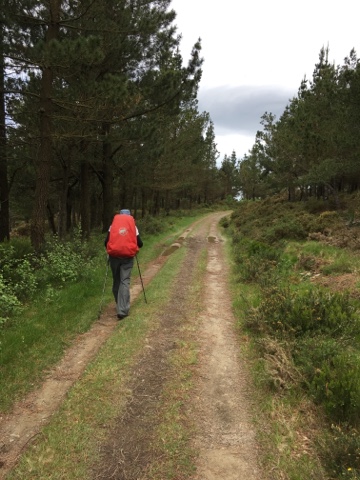 For those following us, note that A Fonsagrada is on a hilltop.  You will have to climb about 100m or so, no matter how you get to it but our pensión owner has told us that the new route into town was done for political purposes to go past other pubs and albergues.  About 1.5km before town, you will see markings for two Camino paths which is confusing.  One points to A Fonsagrada, the other to Buron – at least that is what the signs say.  If you take the new path on the left “to Fonsagrada”, you will actually be walking past the town a bit, then climbing a much steeper path to the centre of the town and the church’s albergue.  If you take the older, Buron path, then follow the signs to Fonsagrada (not all the way to A Pobra de Burón!), it will be a little shorter and not nearly as steep although it is still a climb.  I don’t think either route is all that beautiful but I hate it when they change the path just to get more business to certain friends.  Another note too, the marking continued today to be confusing or missing in spots, at least until Galicia.  Sometimes they would have six neon orange arrows on the road and four pieces of police tape hung from branches just to tell you to cross the street.  Then, after you cross the street and start walking down the road, there is no marking telling you that you are supposed to fork off to a higher, parallel road except a yellow arrow 50m up the road.  Shortly after that, there was another fork and we had to walk 50m down each option to find which was the correct path.  It’s not a big issue but we really were spoiled with excellent marking from Irun until just a few days ago. 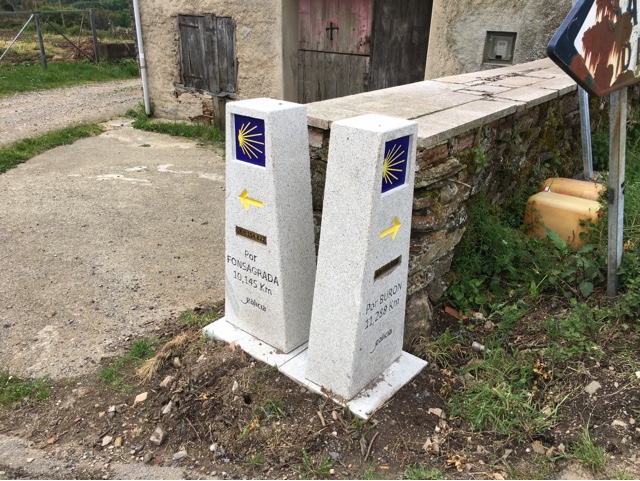 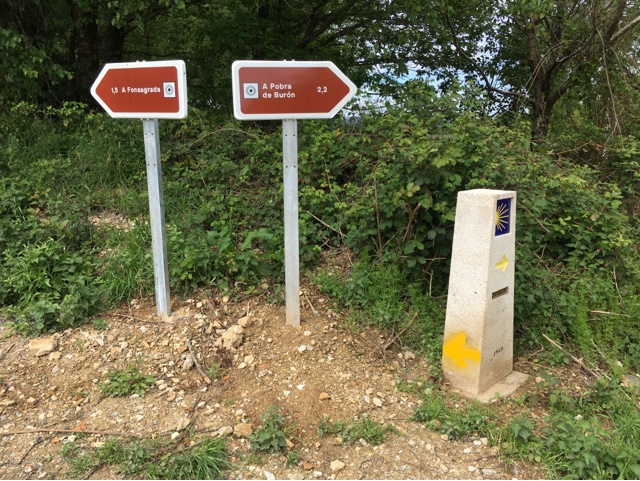 To make it even more of a holiday than the walk today allowed, when we arrived back in the Pensión Casa Manolo, Melanie casually asked if it was possible to get clothes washed.  The reply from the owners son lasted five minutes but I think he said that if we gave the dirty clothes to his mother within 15 minutes, she could wash and dry them before dinner.  We almost stripped right there in the bar.  Really, we got in at 1:00pm and I didn’t have to wash, wring and hang the clothes in our room?  This really was a holiday.
Because of all the time we had, we did a little sightseeing in town.  It turns out that the only thing to see is the small church and that is closed on Mondays.  Because all our friends had walked to Padrón, 1.5km more and we had nothing else to do, we sat in a bar, had a beer and helped guide pilgrims to the different pensións and albergues in town.  With two nights here, we are the local experts.  If we stay a third night, we get the keys to the city.

As we left the bar, the timing could not have been more perfect.  Just outside was Bart, Jens, Gerrit, Janek, Dominika and Agatha.  Apparently there was no place to eat in Padrón so they walked back to Fonsagrada for dinner!  We begged them to eat with us at the pensión so that we could get a commission.  It worked.  Yet again, I think we laughed for two hours straight.  They are all wonderful people and a joy to share time with….  at least after they finished with the wi-fi. :p 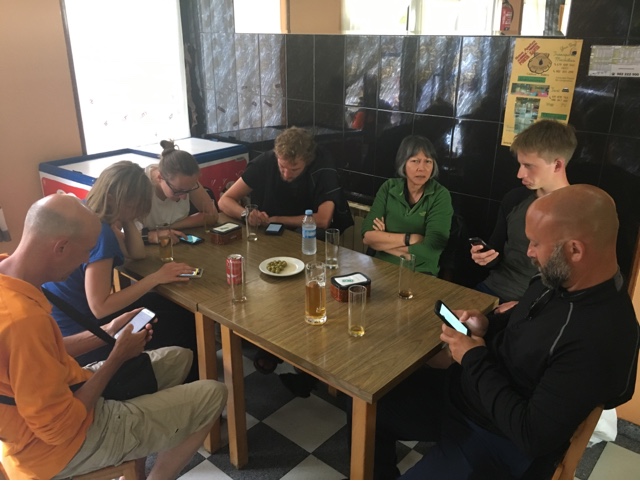 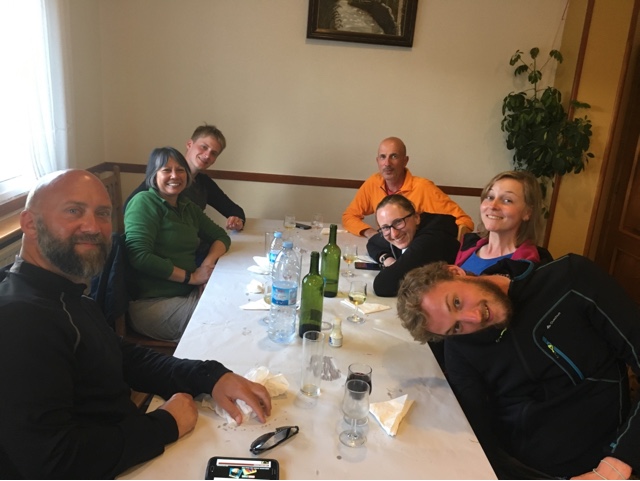 That’s it for today.  Because of the 25 Brazilians a day behind us and the large groups from France and Germany a day in front of us, we are trying hard to reserve spaces to sleep now two days in advance.  We usually never reserve anything but when we do, we have never done more than one day in advance before but that’s life on the Camino in May now, I guess.  Unless something unforeseen happens, we will be in O Cádavo tomorrow and the Roman walled town of Lugo on Wednesday.
Peace y’all.