Skip to primary content
Today’s walk was more gratifying as a challenge completed rather than as a walk through beautiful countryside.  There were certainly very nice paths and views but it probably had the most hills of any of our days so far.  I can barely remember any flat bits at all and a lot of it was quite steep either up and down.  There were a few killer climbs that seemed to ascend a few hundred meters with 30-40 degree angles.  Finally, the cloudy days that have kept us cool recently decided that we didn’t need to be cool today.  The sun shone brightly and harshly after about 10:30am. 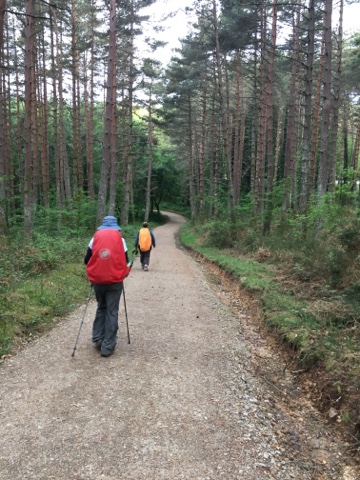 We had a quick, early breakfast at Pensión Manolo and then said goodbye to the lovely old couple that run that place as if every guest was an old friend from out of town who they are hosting.  I still recommend staying there but if you don’t speak Spanish, expect to get yelled to (never yelled “at”). 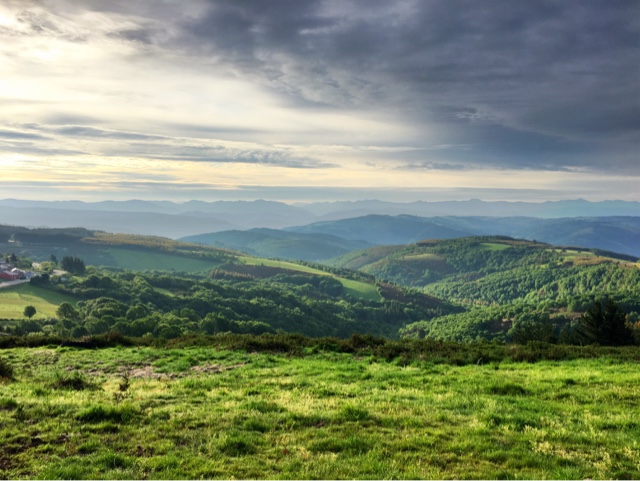 On the road by 7:10am, we were quickly struck by how fit (or crazy) our friends are.  They stayed 1.5km past Fonsagrada last night, in the hamlet of Padrón, and walked to Fonsagrada for dinner then back afterward.  In that distance though is a steep 100m climb into the town.  I have to admit that we would rather go hungry than walk either up or down a steep hill that long after a day on the Camino.  That hill was only a sign though, of what was going to be a recurring theme for the day. 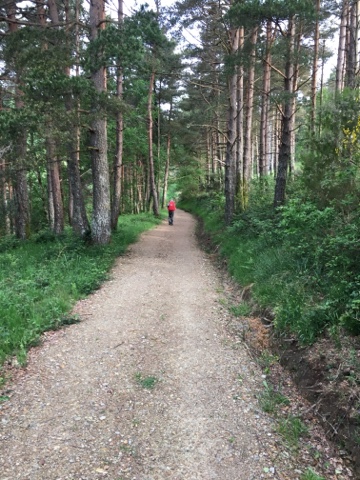 Another recurring theme for the day was the major road, LU-530.  We pretty much walked parallel to that most of the day.  Sometimes we walked on the road shoulder but most times we were 100 – 300m or so away from it on one side or he other.  Occasionally, we were short cutting over mountains or down in valleys when the road had to make a large detour around the obstacle.  I see that the same road will be guiding us tomorrow into Lugo too.  Oh boy. 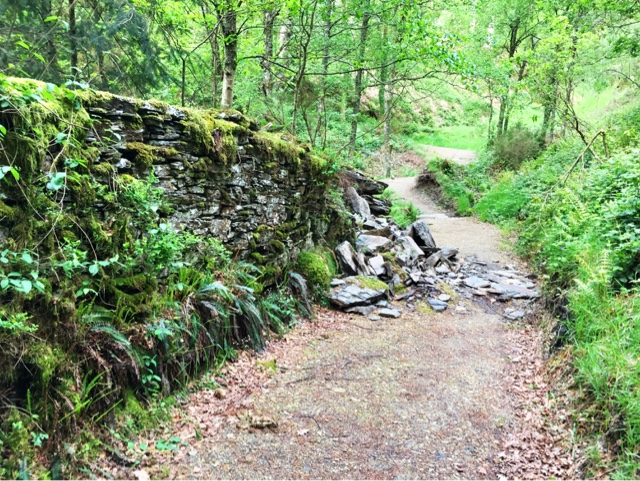 My dad was here!  (Only my family will understand this photo.  Sorry!) 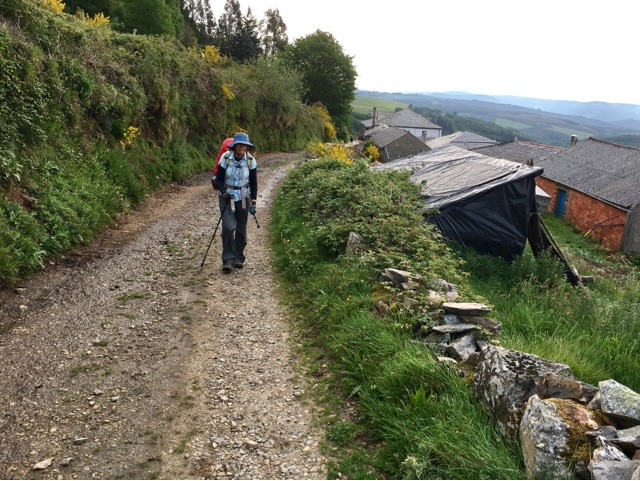 It wasn’t too long after we passed by Padrón that we were passed by Jens, Janek, Gerrit, Dominika and Agatha.  We had an earlier start than they did but Bart left before we got there.  We walked together for a little bit but I think their combined ages are the same as Melanie’s and mine.  We can’t keep up with them.  Even Agatha with her bad knee whizzes by us on uphill portions.  Downhill, we can still beat her though because she needs to go down sideways to lessen the pain in her knee.  At the bottom of the worst descent, the steep 300m drop to Parradavella, we caught up to them at the first bar / cafe we passed . There, we also met a few new people as well as the 2/3’s of the French trio we have been around since Oviedo.  The one Frenchman who wasn’t walking well several days ago stopped his Camino in Castro.  We gave our group a head start while we finished a bocadillo and we never saw them on the trail again.  Agatha and Dominika were going to stay in Cádavo but they later changed their mind and all went on another 8.8km to Castroverde.  We did see them just as we arrived at our hotel.  There is no way we could have made it to Castroverde.  Well, of course we could have but there is not way we would do it on purpose… while sober. 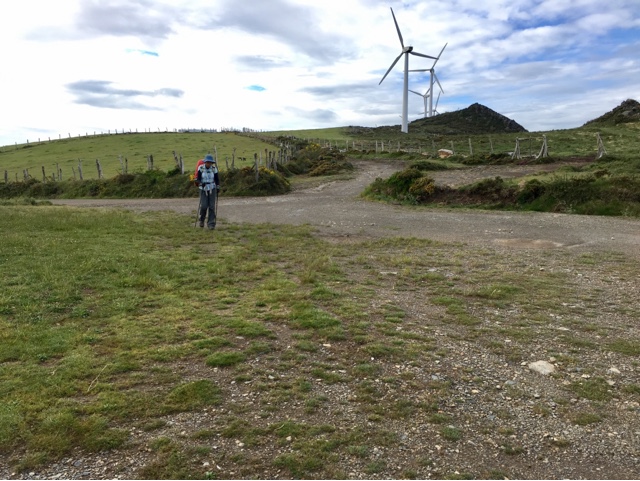 The rest of the walk included a ridiculous climb of 300m that I swear was on a 45 degree angle.  Honestly though, it felt like it was much, much, much longer.  Much of it was in the forest so there was some shade but the sun and grade just made it very hard going.  If I were doing that section again, I would wait for cloud cover or rain then walk up the road.  It was difficult.  A highlight of the walk though, was passing by the ruins of an old hospital that served pilgrims from the 14th to early 20th century.  Again, that shows that we at least walked part of a very original trail. 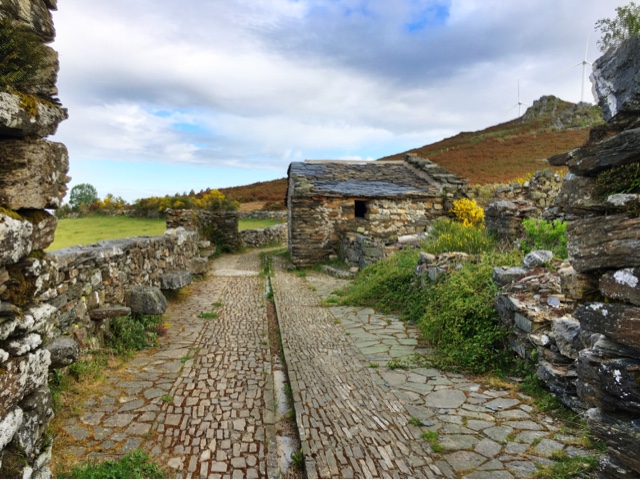 The last 6km into Cádavo was a bit boring either along the road or on a new, straight path to town.  I could have done without it but we couldn’t get Uber to respond.  Just kidding – but only about Uber.  The new 600,000€ track the the tourism put in for pilgrims should have been spent on partitions in the albergues or adding shade trees to the existing trail.  Just my opinion though.  The old track that runs parallel to the new one 100m away was a perfectly fine, shaded walking trail. 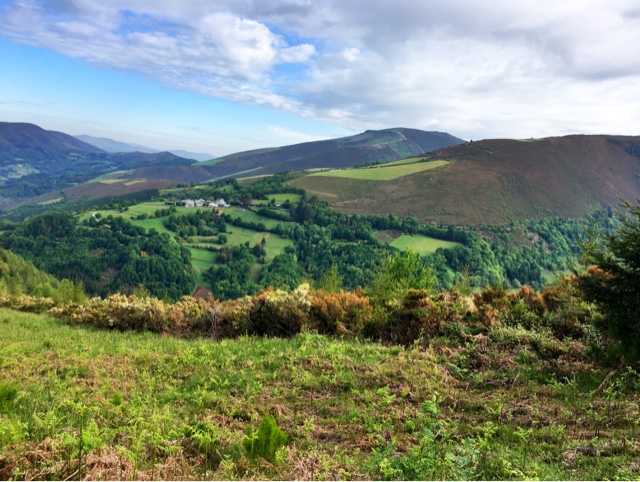 With all the usual gang 9km in front of us, so they can have a short, easy day walking into the city of Lugo, we are lost.  Canadian Natalie and the English Gang of Four are here and we might have dinner with them.  We have made arrangements to meet our friends in Lugo tomorrow night but after that, we will likely be in different towns all the way to Santiago.  We will meet again, for sure. 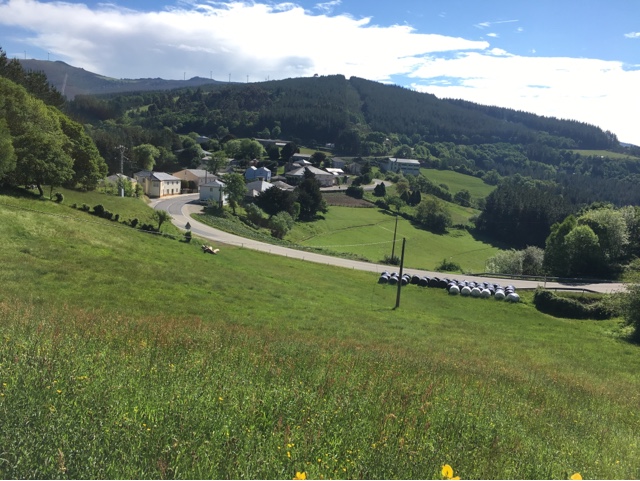 We are staying tonight in the hotel Moneda.  I think it’s 40€ per night but I just realised that I haven’t asked.  It seems like a perfectly nice place and they have a good bar downstairs.  Hopefully the dining room is as good. 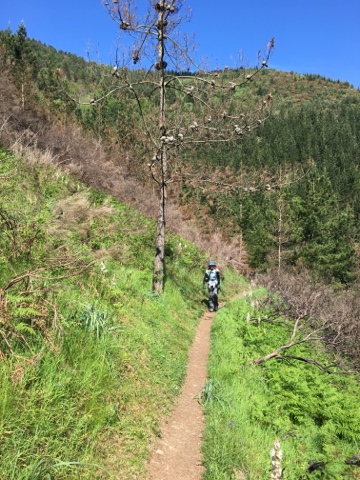 I need to buy groceries for tomorrow’s walk.  Castroverde is the only place we can get a drink or something to eat.  The 22km after that does not go anywhere near a town with a bar.  How do their citizens survive?  We also just checked and it’s supposed to be raining all day.  I’ll believe it when I see it.
Peace y’all. 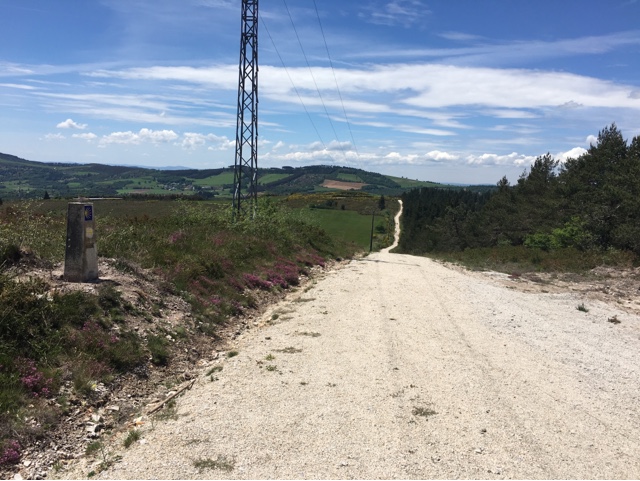