Skip to primary content
Before I say a word about the walk, I just have to say that we are freaking out right now.  I mean the good kind of freaking out too.  We are bouncing around the hotel room like little kids.  Okay, at least I am.  Melanie seems to take everything in stride.  I think we just got a little luck thrown at us.
A few days ago, when we had to get creative to find a bed when the albergue in Castro was full, it cost us 40€ in taxi fares to make sure that we had a place to sleep and that we walked every step of the Camino.  We didn’t want that happening again so we started booking places to stay two days in advance.  I used booking.com to find a place in Lugo and looked for cheap pensións or hotels that cost less than 40€, i.e., about twice the cost of two beds in an albergue.  There were several that fit our budget but the Hotel Mendez Nunez caught my eye.  For 50€, we could stay inside the old walled city right around the corner from the Plaza Mayor and the cathedral.  The hotel had very good reviews, was recently completely renovated and modernised and has been run by the same family for more than 150 years.  You would have thought the father would have retired by now.
We just checked in and the very pleasant receptionist asked me to wait a minute while she made a call.  She then checked us in, stamped our credencials and sent us to our room, #302.  We took the lift to the third floor (most hotels in our budget don’t even have lifts), opened the door to our room and…. Holy Blessed Mother!  The room was large enough but had no bed!  “Wait”, Melanie said, “there is another room”!  They put us in a suite!  We have a living room with its own powder room!  We have a real king-sized bed, not two singles pushed next to each other!  It has four pillows!  There are candies on the pillows!  The bathroom has a jacuzzi!  We have TWO balconies!  We have two televisions!  The artwork is hanging on the wall, not screwed to it!  Holy smokes!  I’m freaking out! 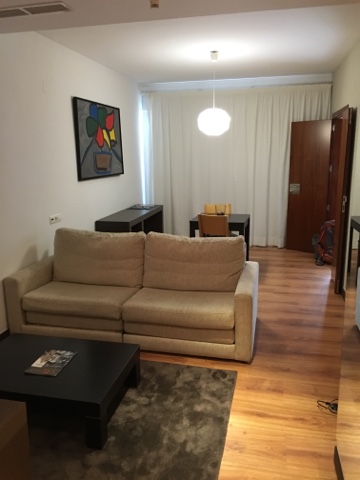 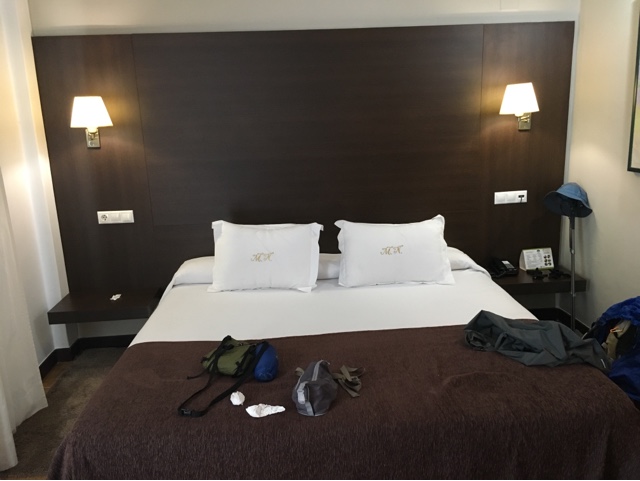 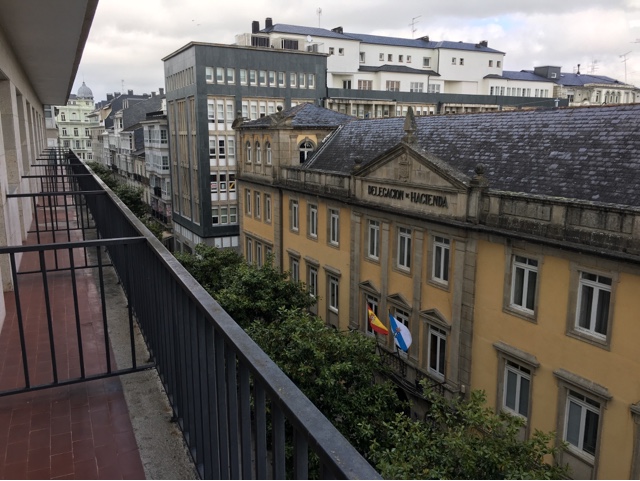 Now, back to your regularly scheduled walk commentary.  Today was always going to be a long one for us but it was hard to do it otherwise.  Our friends made it a short day for themselves but by making yesterday insanely long.  We couldn’t do that.  What we did do to mitigate the day was to wake up very early and start walking at 6:00am.  This would take one hour of the walk from either the burning sun or the rain into cool darkness.  It worked like a charm.  As it turned out, it was very foggy at 6:00am and just starting to drizzle.  We decided then to walk an extra 500m along the road, rather than the trail, because of the visibility. By the time we got to the point where the Camino trail and road met, about 45 minutes and 2.7km later, the sun had risen and was giving enough light to see. 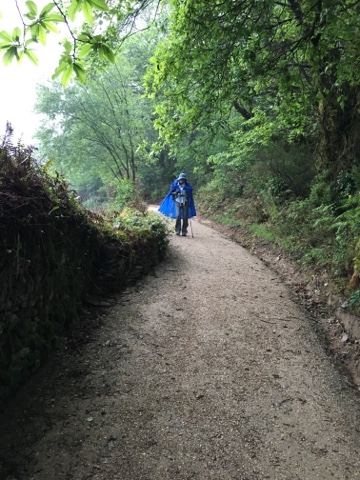 The trail here, and like much of today, was fairly flat and the specially built pilgrim trail of light gravel.  The best part of that is those trails don’t flood.  The light rain continued until about noon and threatened to get heavier but it never did.  We went off trail one more time today, for the last kilometre before Castroverde where the trail made the mistake of both leading us up a dark, muddy, steep trail at the same time it was within sight of the road.  We got lazy and took the road.  For those following us, the 5-6km route into Castroverde is mostly along the new “pilgrim” path, except for the last kilometre.  I can not tell if it an improvement over the older path or not but my guess is that it is a bit shorter, less of a climb and mostly better mud-free paths. 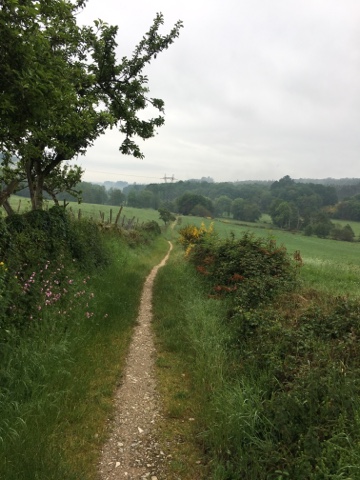 In Castroverde, we had a brief surprise.  As we walked past the albergue, Jens came out and said hello.  It was about 8:00am, which is late to leave the place but we figured we would chat some when he passed us on the trail.  We stopped in a café for breakfast and kept an eye out for him but he didn’t come by.  In fact, we never did see him again today but the plan is to have dinner later with the whole group so I will find out what happened then. 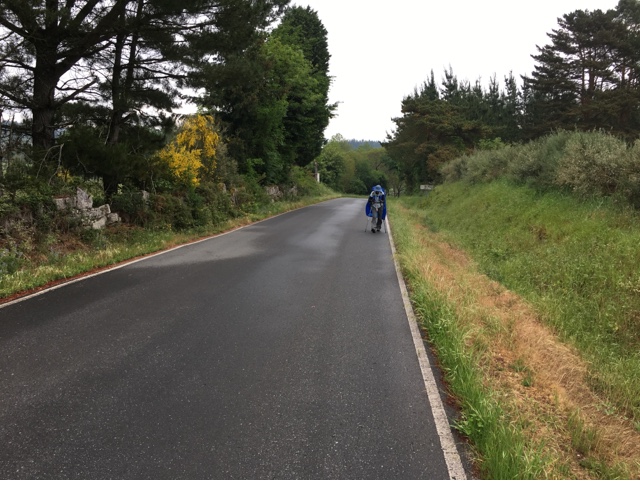 The next 12km after passing through Castroverde was on very nice trails, either natural ones or the ones built by the tourist office.  Although it was still raining lightly, we did notice that the trail was mostly shaded through farmland or small villages.  Once we got to the hamlet of Gondar, the trail marking got a little confusing.  They had the old style Galician pillars with the shells “pointing” away from Santiago but the shell was spray-painted over with a neon-coloured arrow pointing towards Santiago.  They were not as numerous as normal and their mileage signs had been removed.  For a while, we didn’t see any other pilgrims and we thought we missed a turn onto a new path.  Fortunately, we started passing some people and getting passed by others.  If we were lost, we were not the only ones. 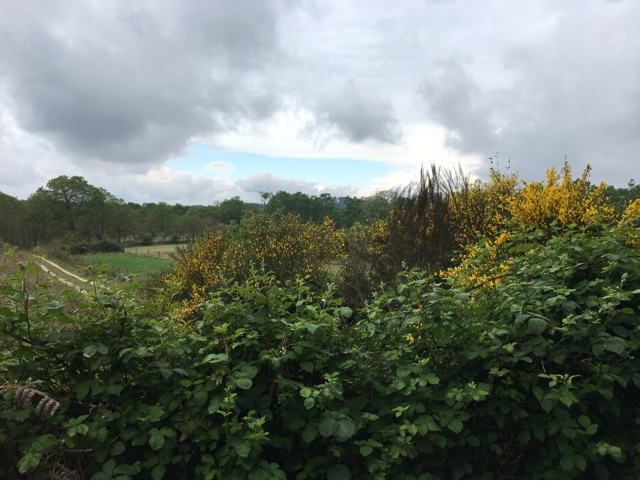 We met an 84 year old South African man walking his fifth Camino.  It turns out that a woman we met a few days ago and had dinner with last night is his daughter.  Actually, that story is backwards because the daughter told me last night about her father being in the albergue in Castroverde so when we walked up behind the guy and said hello, I could not mistake his accent.  After the usual greetings and questions, I said “You must be Susan’s father”. He said he was and asked where she was.  I said that she may still be in bed because I heard she starts late.  That made him laugh. 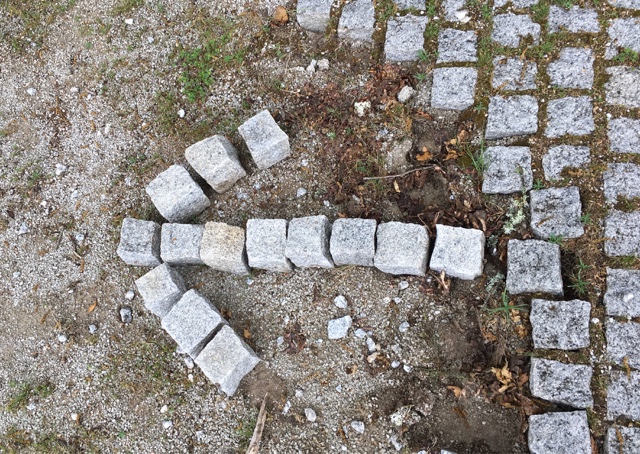 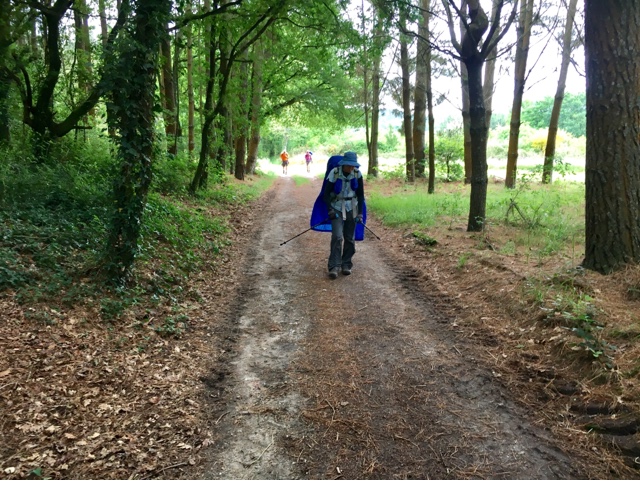 We had about 2km of a boring walk along the LU-530 before the final 8km into Lugo.  With about 6km left, we met Dominika and Agatha resting.  Agatha was carrying her bag so with her knee, they need more frequent rests but I’m still impressed.  We chatted for a bit as they geared up again and then said we would catch them at the next rest stop.  Sure enough, bad knee and carrying her bag again, they were too far in front of us within minutes. We caught up with them again with about 3km to go then walked together into town. 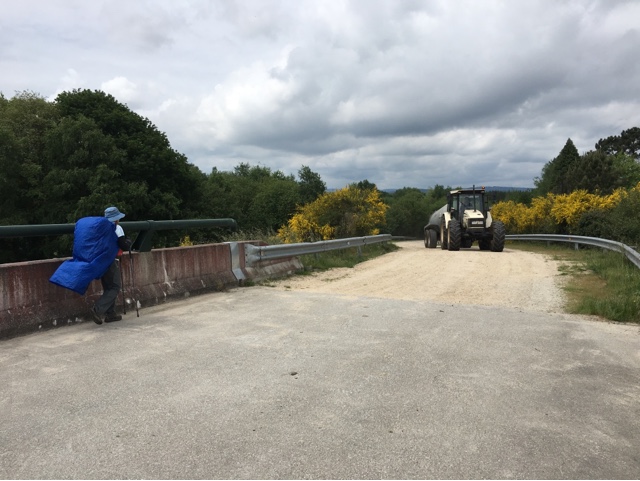 Now, walking into Lugo is an exciting event.  First, you have about a 100m climb passing by a Roman aqueduct.  Then you come up to the massive 3rd century Roman walls that encircle the old city.  They are not as big as Pamplona’s but they are still basically, entirely intact. We got to walk through the same gate that millions of other pilgrims have through the centuries and tomorrow we leave the city through the St. James gate.  Did I mention our hotel? 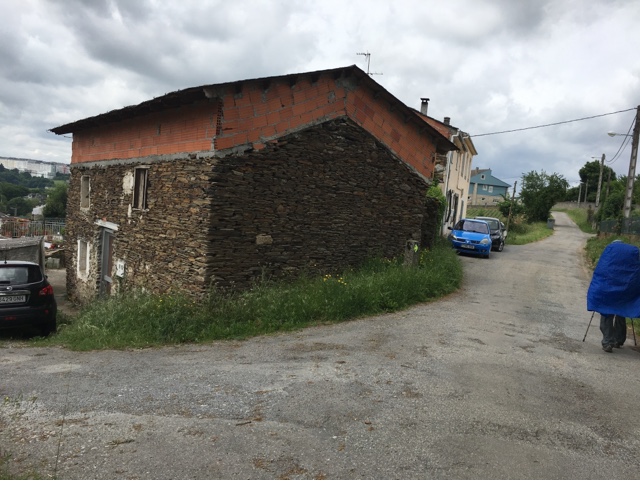 One way to raise the roof,

After a dip in the jacuzzi, we did a little sightseeing in town.  There is some holiday today and a Roman legion marched through earlier, complete with banging drums.  The 12th century cathedral is very impressive but many people asked the same question that I did – with all the ornate beauty of the place, I wonder why they didn’t build in an area for people to sit during mass.  Seriously, where do people sit there?  We walked a bit on the wall and visited the St. James Gate too. 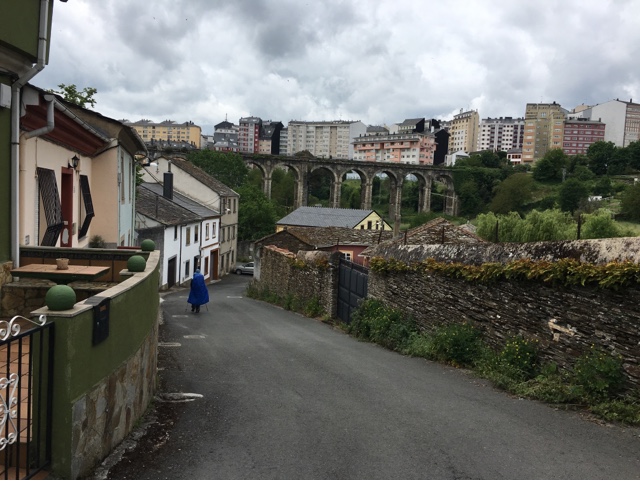 At 7:00am, Jens, Bart, Janek, Agatha and Dominika met up with us in the Plaza Mayor, as Camino etiquette dictates.  Gerrit is having heel problems so he didn’t want to walk anywhere for dinner.  Natalie and Susan were also there for drinks but they had other dinner plans so the seven of us shared probably our last meal together as a group.  The guys are walking long distances over the next three days to spend the last night in Monte do Gozo for a short walk into Santiago on Sunday.  The girls also want to stay in Monte do Gozo but will likely do four shorter days to arrive in Santiago on Monday.  Melanie and I are aiming to do four more days of about 25km each.  Maybe we will meet in Santiago but some of the guys leave there after only one day, for a walk to Finisterra or Muxia.  We shall see. 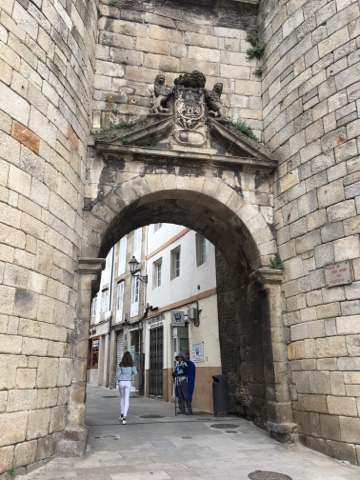 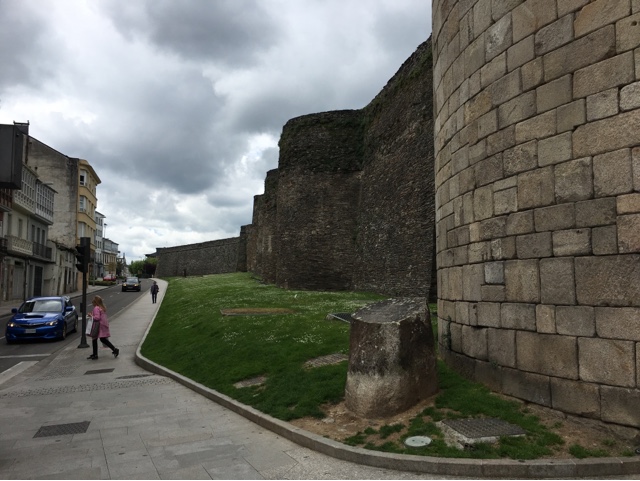 My apologies for the lack of decent photo today.  Most of the time, the iPhone packed away to keep it dry.  Did I mention our hotel room?
Peace y’all. 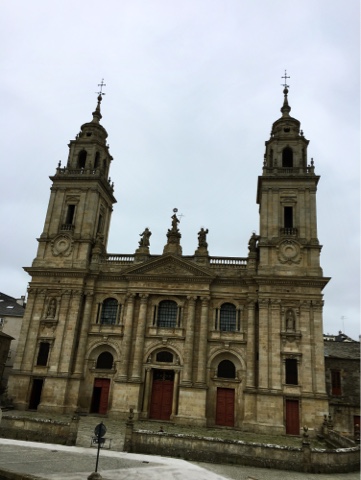 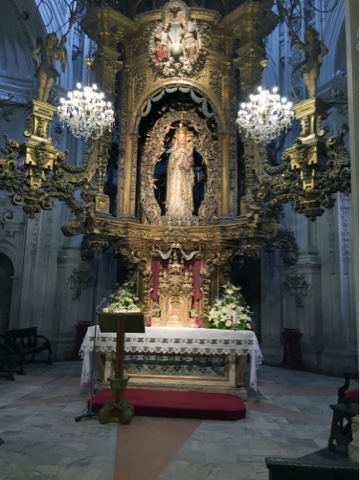 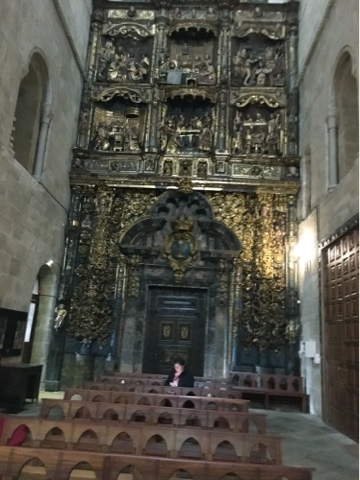 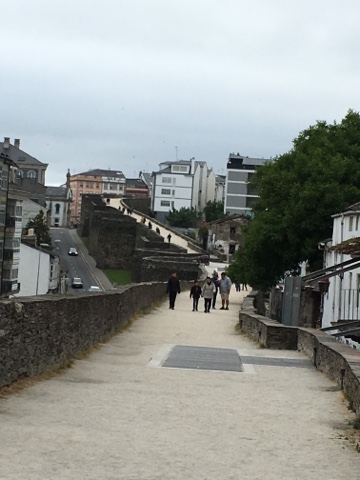 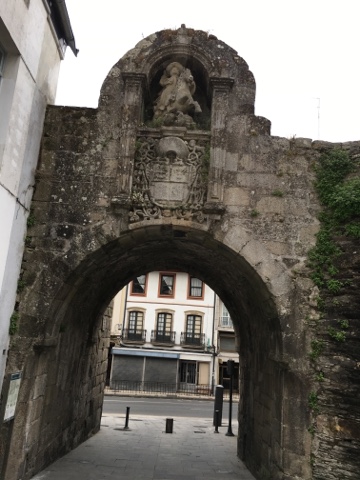