Skip to primary content
Yet another good day for us, filled with a few good surprises.  We walked a longer distance than usual and woke up earlier than normal to try to keep close enough to our friends that we would see them at least a bit today, tomorrow and Sunday.  They were sleeping 6km in front of us last night and they planned to spend tonight about 7km past Ribadiso so this village is the furthest we were comfortable to plan for. 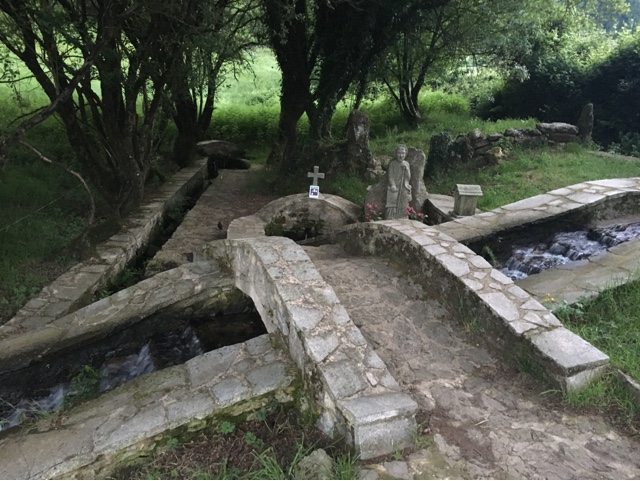 When the alarm went off at 5:00am this morning, Melanie and I both questioned our sanity but that only lasted as long as the snooze button allowed.  We quietly dressed and packed our gear as I doubt anyone else staying in the casa rural was walking the Camino.  If they were, they weren’t getting up before sunrise and they would not have liked to hear us walking about.  The problem with stealth is that it takes too long to tiptoe, particularly when your toes are all bandaged with Derma-Active, Compeed and Band-aids.  When we finally got the front door and gate unlocked, it was 6:00am and still dark.  I finally got to use the torch that I brought along on this trip and carried for 740km so I felt vindicated for packing it.  We only needed it for the first kilometre of the day when walking on a dark, rock and mud path, then a back road.  After that, the dawn was enough to light the way. 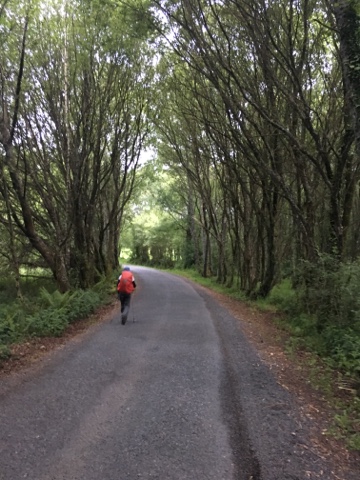 Most of the 6km to As Seixas was on the back country roads but a few places had trails through the forest.  At As Seixas, we considered again going off trail a bit to the albergue to see if our friends were still there and to get some breakfast.  Okay, I have to admit that the breakfast was more important but we decided not to because the others had likely left by 7:15am and we thought there were more chances for food ahead on the trail.
The next 8km to Vilamor was mostly on lovey gravel or dirt trails and included at 150m climb and a 300m descent.  Neither really bothered us at all but it does slow us down some.  At one point on the climb, I looked back to Melanie and saw Jens, close behind her as well as Gerrit and Janek a little further back.  Jens put his finger to his lips, then hid behind a rock – a rock about 1/4 of his size with his hands over his face.  I asked Melanie to turn and look and, after a confused few seconds, she burst out laughing when she figured out who it was.  He is such a cartoon.  Soon after, we where all at the top of the hill, just below the misty cloud.  It was a magical moment. 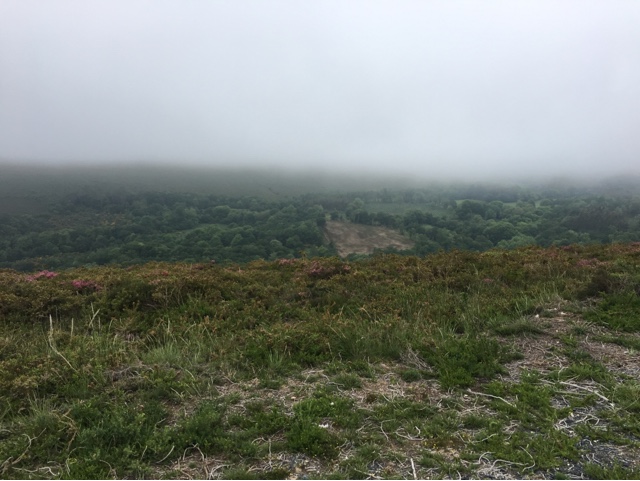 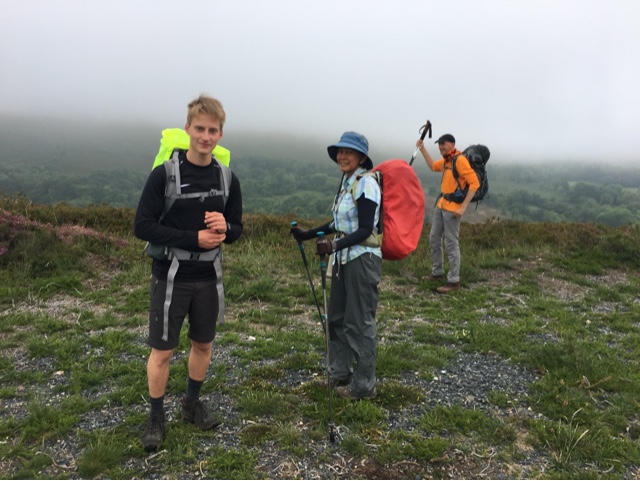 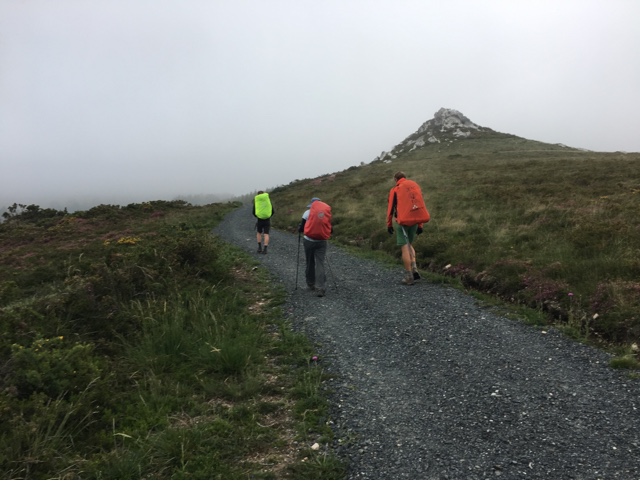 We walked together some distance but Melanie and I can’t keep up with them for too long.  Gradually we fell behind and we figured that we might catch them at the next bar.  Speaking of which, where IS the bar?  We still need breakfast!  It wasn’t until we reached 15km for the day when we found a bar that was open.  That is too much walking for a decaffeinated wife!  The good news was that not only could we get coffee, juice and tostadas, but Gerrit, Janek and Jens were all there with Dominika and Agatha, as well.  Only Bart was missing.  It was a good stop and I also learned a lot there about the artwork of Picasso and a Camino artist, possibly named Pisacco.  Sorry folks, that’s too long a story for me to explain, but it was funny. 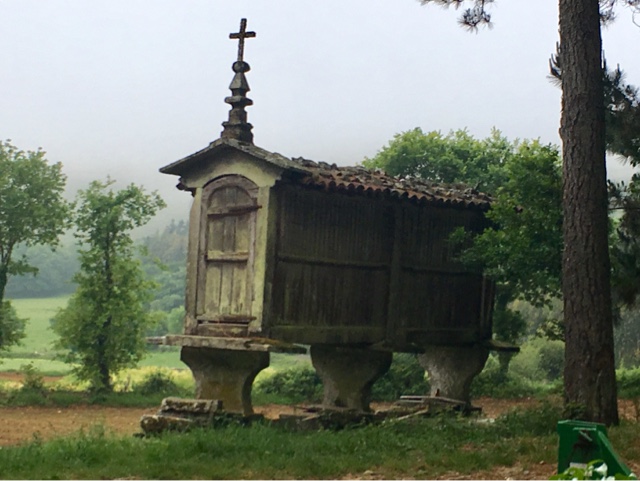 We gave everyone a three minute head start leaving the bar while we finished our toast.  We figured we would likely see them next only tomorrow.  Even Gerrit and Agatha, who are suffering from bad knees, ankles, hips and / or heels, are faster than we are, except on steep downward slopes.  There, we let physics work for us and my weight means I can move down the hills at a much better pace. 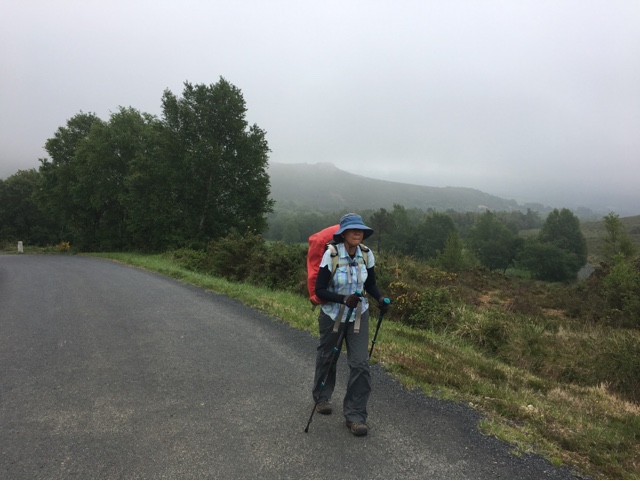 The next 5km into Melide was fairly flat, country roads, gradually turning into suburbs and urban landscapes.  In Melide, we joined the route of the Camino Frances and the hundreds (thousands??) of people walking that today.  Initially, we only noticed a bit of an increase in pilgrims but every now and then, we rounded a corner and there was a group of 30 or 40 people walking together.  Oh my.  It didn’t really bother me but after the quiet Norte and Primitivo, it is a bit of a culture shock.  We took a slight detour over to the main street to find an ATM but we were not successful.  The Primitivo joins the Frances route on the northwest side of the city so, walking westward didn’t get me near a bank.  We will last until Arzúa, for sure. 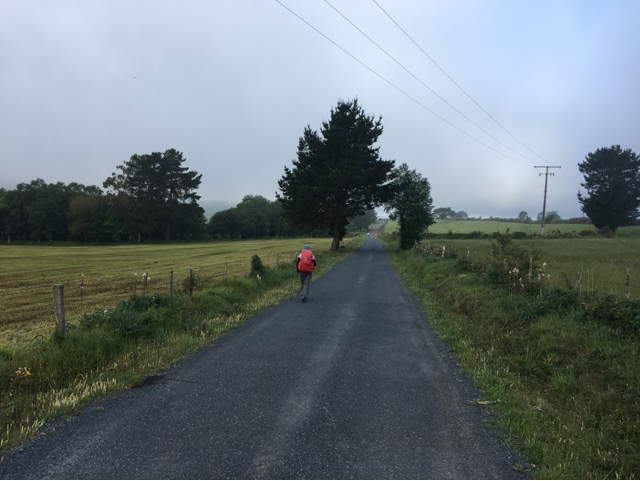 As we walked the 11km from Melide to Ribadiso, we tried to remember sections from our walk on the Frances five years ago.  Back then, we walked that part with a young couple from New Zealand and the US.  For some strange reason, Melanie seemed to recall each climb, whether it was a 10m or 80m climb.  I remember the café where we stopped for lunch five years ago (you can tell what our respective priorities are) and when we reached it today, we decided to have a drink and a sandwich.  No such luck though.  There were 50 pilgrims there and although we could get a table, the barman was rude from the moment I said “Buenos dias”.  We got out of there quickly.  My, how times change. 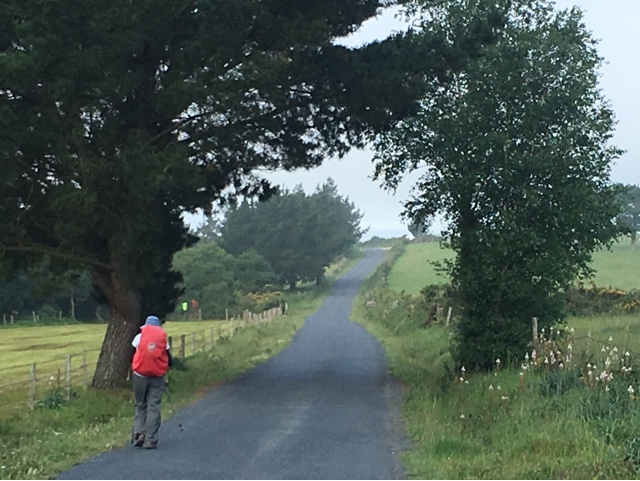 We later found a small local bar that dozens of pilgrims were passing by every minute.  We went in there, said the usual greeting and asked for two lemon sodas with ice and a banana, all in polite, quiet Spanish.  The barman seemed genuinely surprised and impressed.  After getting our drinks, he immediately went over and cut us two big slices of cake to eat as well.  I guess he is used to only a few pilgrims coming in and the ones who do, demand quick service in their own language or just use the bathroom and run out the door.  We really are on a new route now. 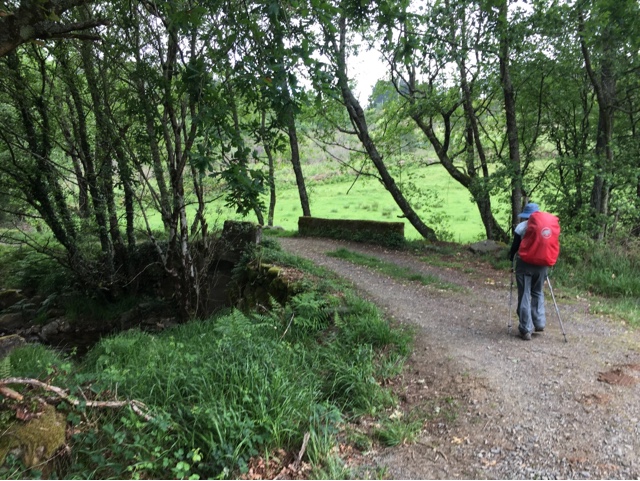 The 31km today was just about the right distance for us.  The clouds until Melide made the first 2/3’s easy and when the sun came out, we knew we didn’t have that far to go and there was a fair bit of shade all the way to Ribadiso.  When we arrived at the bottom of the hill into the village, we crossed a small bridge over a stream and I saw our stopping point for the night, the Pensión Ribadiso, right in front of us.  I immediately started to laugh out loud.  Picture this: Just after the tiny bridge, immediately to your right, is a albergue.  10m after the bridge, directly on the same path but on the left, is the Pensión Ribadiso.  I laughed because I was remembering the negative feedback on booking.com about this place that someone from the UK had written just last week: “It’s a little hard to find if you are on the Camino.  More signs from the road would help.”  For Pete’s sake!  The village only has a dozen buildings and you practically have to trip over the Pensión to see any of the others.  A blind man could find it in 15 seconds if he was standing on the bridge and I told him which side of the bridge to get off of.  Sheeehsh!  How did Clive from the UK manage to walk all the way from Sarria with his navigational skills? 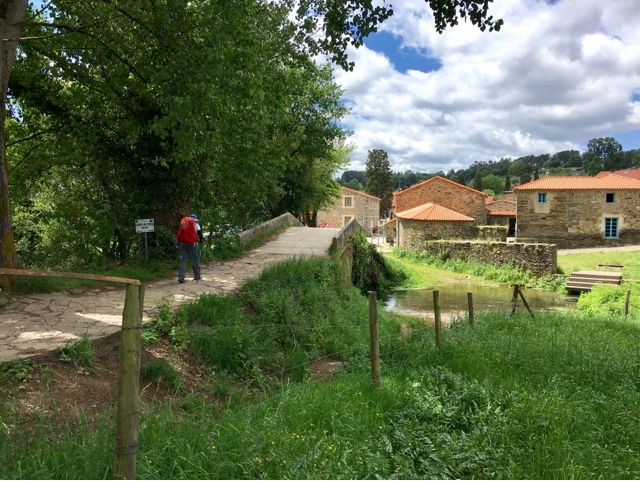 Another fun thing about the pensión, the nice gentleman who registered us, told us that we were getting room #1 and then walked us to our room.  He didn’t have to go far.  Room #1 was about a meter away from my butt as I leaned over the reception desk to sign the credit card chit.  It’s a corner room and out one window is the small bridge over the stream.  Out the other window, I can put my hand out and high-five pilgrims as they pass by.  Several stuck their heads in to check out the room.  Better still, just when I was getting out of the shower – fortunately, the bathroom has a door – I heard a familiar voice.  Gerrit was walking by, looked in the room and saw Melanie sitting there so they had a chat through the window.  Apparently, the group had decided to detour into the middle of Melide and have a real proper pulpo (traditional Galician octopus) meal.  Soon thereafter, Jens and Janek stopped by to say hello and later still, Agatha and Dominika did too.  This place is great!  That said, we probably saw about 300 pilgrims pass by after 2:30pm.  That means that there are likely 1,500 or more arriving in Santiago the same day we will be.
We just had a semi-decent pilgrim’s meal at the restaurant across the path.  The decent part of the “semi-decent” was that we sat with a Japanese man from Sweden (yes, I said that right).  He was sitting by himself so we invited ourselves to sit with him.  We had a very enjoyable conversation with him and talked a lot about the Shikoku 88 Temples pilgrimage walk in Japan which he competed last year.  That’s now back on our wish list again.  By the way, the not so decent part of the meal was spaghetti with ketchup, rather than any semblance of a tomato sauce and the waitress who was in such a hurry that she never had time to bring the plates all the way down to the table when serving them.  She just dropped them from about six inches above the table.  The service industry must tire easily from pilgrims.
It’s bedtime for me.  Melanie has been sound asleep since 8:30pm. We will try to wake early again tomorrow but we’ll see.  It would be good to see the group again.  We will actually walk further than they do tomorrow so we can be within striking range for the final short walk into Santiago.
Peace y’all. 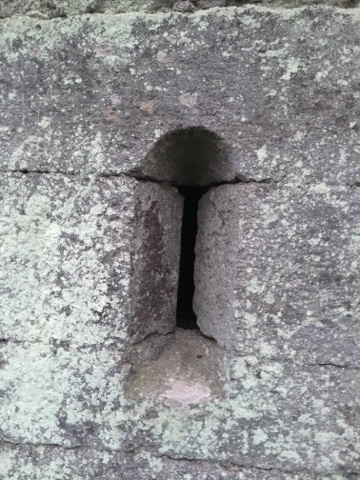 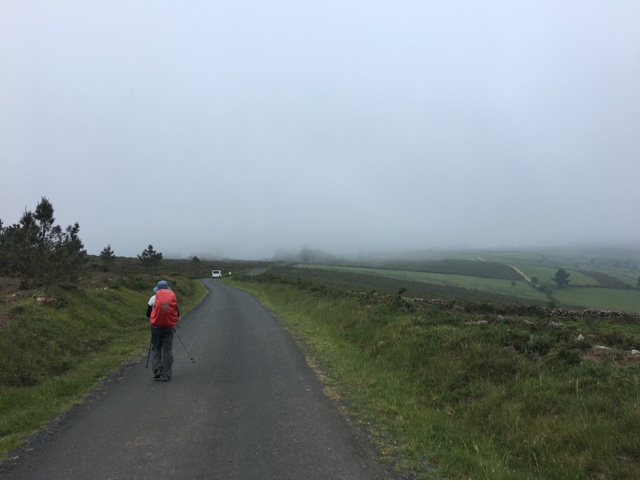 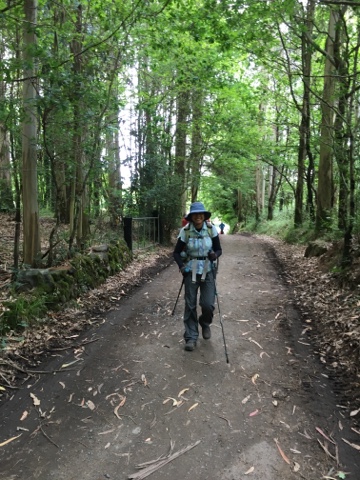 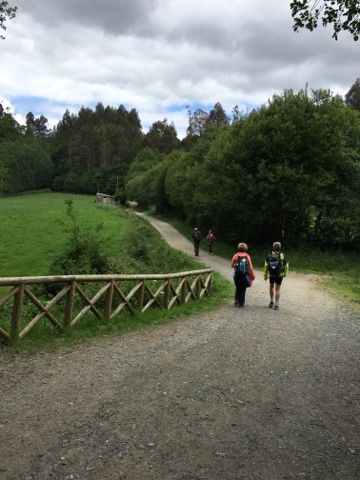 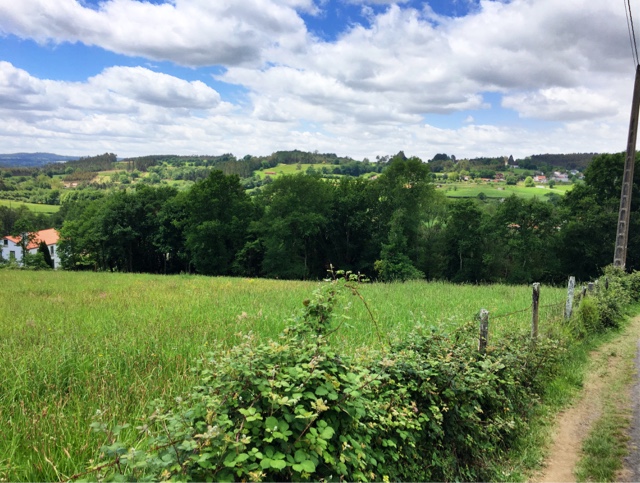