Skip to primary content
Our last full walking day was also our first walking the entire day on the Camino Frances.  We needed to remind ourselves that things were going to be different.  Some pilgrims really get upset of the drastic differences they see between the Camino Norte/Primitivo and the Camino Frances, once the two merge in Melide.  There are many, many more pilgrims on the Frances.  Many of our new fellow pilgrims are also walking shorter stages and / or shorter Caminos (like 4 or 5 day for 100kms). A larger percentage are not carrying their gear and there are many walking as part of large tour groups.  I think we were mentally prepared for the changes for the most part although I still had difficulty with two aspects. 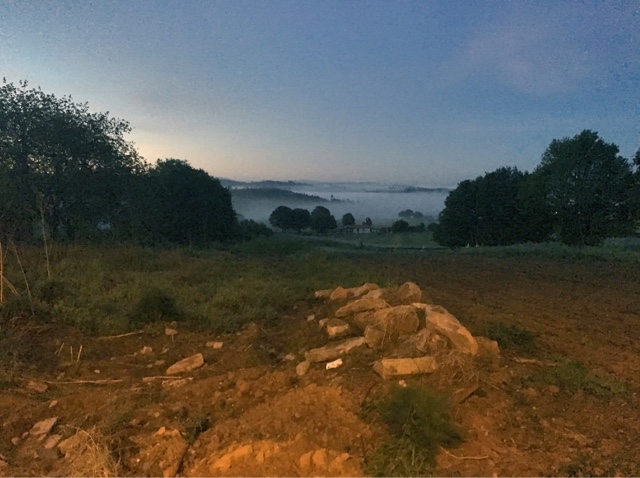 Dawn with fog in the neighboring valley. 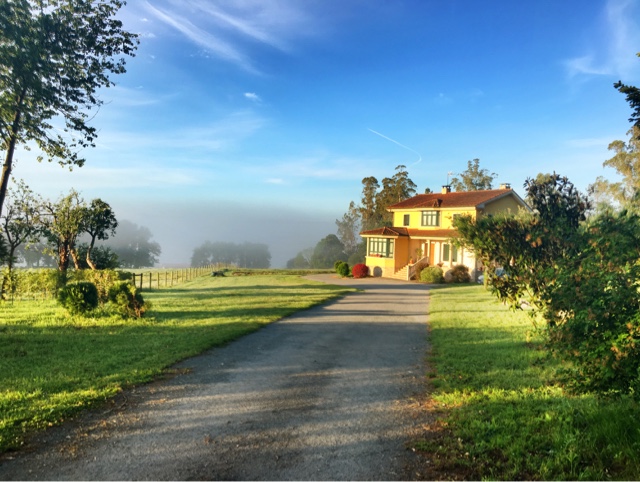 In order to walk part of the day with our friends who were staying 7km in front of us, and so that we could avoid some of the mid-day sun, we started walking early again at 6:00am.  The walk out of the village was along a main road all the way to Azura, 3km away, so it was well-lit although quiet on a Saturday morning.  I was surprised that we didn’t see any other pilgrims until we got to Arzua.  I thought there was supposed to be a bed race.  Did we leave late?  We had reservations at a hotel in Lavacolla but where were the others? 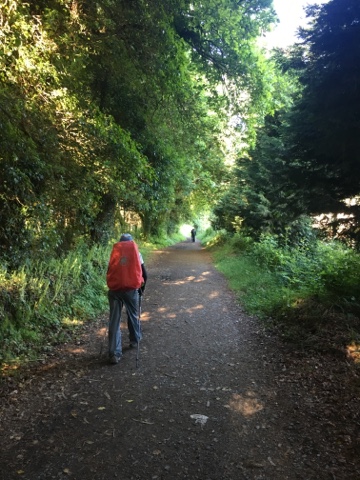 We planned to have breakfast in a bar on the main square where we had lunch five years ago when we stayed in Azura while walking the Camino Frances.  We arrived just as three French bicycle pilgrims arrived.  Oh yeah.  I forgot about them.  As we approached the entrance of the bar, they carefully parked their bikes in a perfect line, the front wheel of the back two bikes touching the back wheel of the one in front of it and the bike in the front touching the the table next to the door.  With the most graceful of elegance and efficiency, they blocked any frontal attack on the bar from the south with their nine meter blockade.  We stood on the wrong side for a few seconds, just staring at the riders in awe when one of them must of realised that my foot was already cocked as a battering ram.  He came back and temporarily moved one bike so we could go inside.  So sweet. 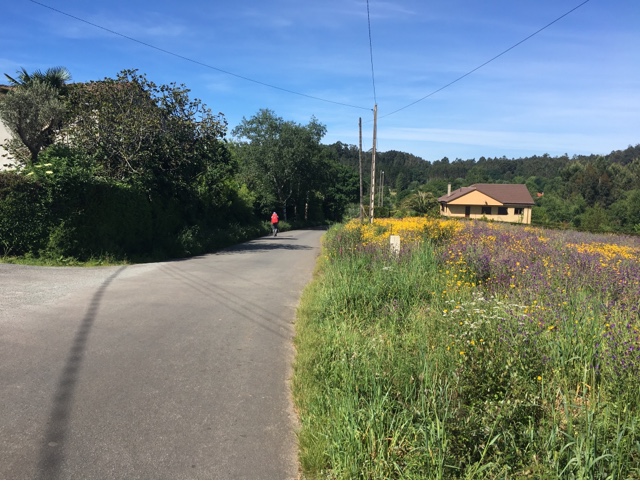 After breakfast and topping up cash at an ATM, the next 11km was a mixture of small roads and good walking tracks through countryside that we recognised from five years ago.  I think that it’s amazing that the route felt so comfortable and familiar.  I didn’t know every twist and turn but when I did turn a corner and look up, I had much more than a feeling of deja vu.  I knew exactly that I had been there before.  I could even remember who I was talking with as we walked certain stretches.  Why can’t I remember where I put my car keys this morning? 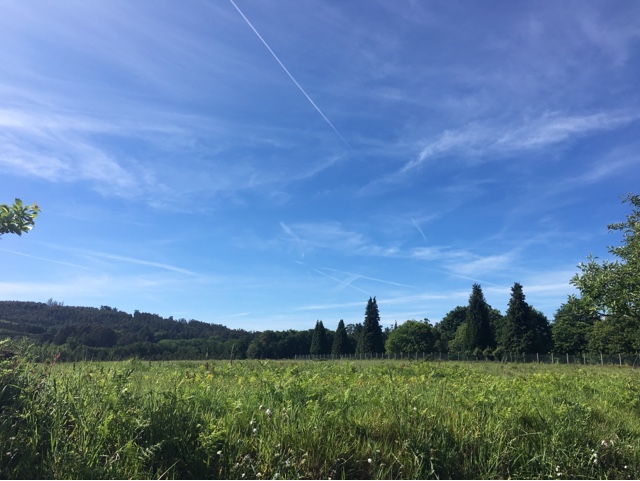 We timed our start today, and our breakfast stop, pretty well because shortly after passing the road in this section that would lead our friends from their albergue near Divideira back onto the Camino, both Jens and Janek caught up to us after their late start.  We were able to walk and speak with them for several kilometres before we stopped for breakfast #2 at a bar where Dominika and Agata were waiting.  It was good to catch up with them again.  One thing I noted though was how fast Melanie was walking while speaking with Janek – particularly up hills.  Even Jens wondered if Janek was carrying Melanie and every time we turned to look to see how far behind they were – always closer than we expected – Janek would quickly put her down and she would walk a few steps while we watched.  Sneaky! 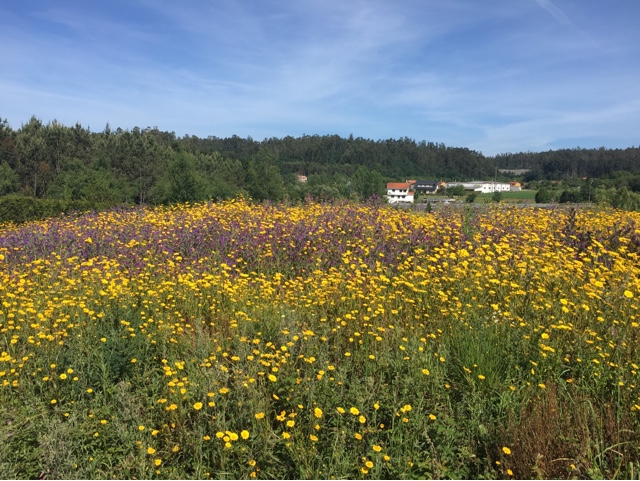 The next 7km was mostly spent on the sidewalk next to the busy N-547 trunk road or within spitting distance of it on a parallel service road.  This section was mostly forgettable except that it provided some relief from the bicyclists who were previously zooming past us without notice on the trails.  Now they competed with the cars for road space and I have to admit that I hoped the cars snuck up on them then, without warning, zoomed past them, just inches away.  That’s karma, baby. 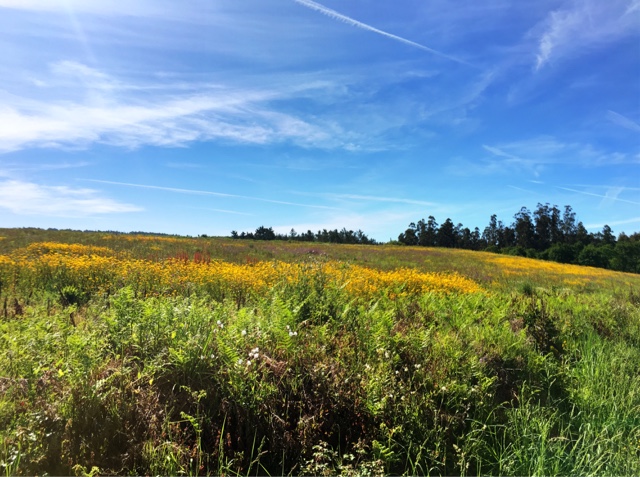 Another thing that was getting to me a bit was all the pilgrim graffiti.  I really wonder how anyone can be so narcissistic to think that anyone else walking the Camino or living in Spain would care what they “had to say” or who would care that they even existed.  Every single mileage pillar was scribbled on with such wisdom as “Turk’s was here 9/2016” (Turk’s “what”, he didn’t say), “Keep going Angie”, “JS, we’re stoping at Lavacolla” (apparently to take lessons in spelling), and other crap.  Every marker had the mileage plaque stolen and many were missing the scallop shell symbol.  Those with the shells had stickers covering the shell that said in Spanish, “Save the world, Pray the rosary.”  Actually, they now only have those stickers on the markers before Lavacolla.  I figured there how easy they were to peel off cleanly.  I “just expressed myself” by removing the ones that I saw after that.  I wish I knew back in Melide. 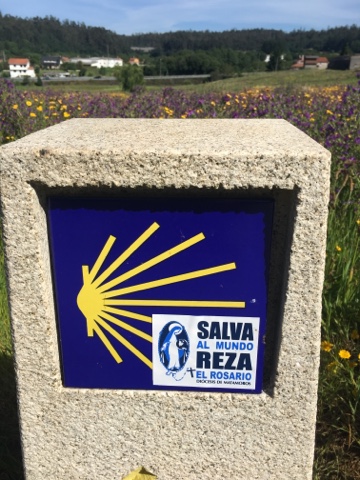 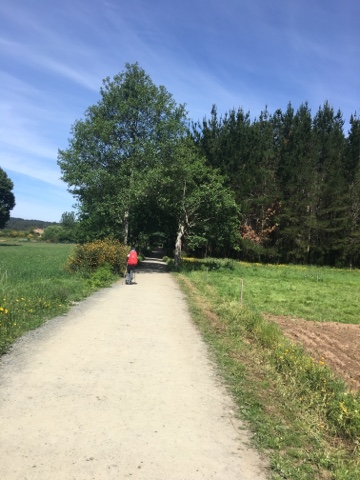 After crossing the N-547 for the umpteenth time, we came to a bar that I remembered stopping at five years ago.  We had to stop there again for either breakfast #3 or lunch #1.  Agata and Dominika were there so we enjoyed their company a bit longer too.  What none of us enjoyed, out on the bar’s balcony, was the sight of the oversized French pilgrim who decided to stop and sun himself a bit at the next table.  He took off his shirt to expose the whale’s underbelly and he pulled the legs of his running shorts as high as possible.  With the folds of his stomach hiding some of the material, it looked as though he was wearing a g-string.  As sweet, charming and funny as the girls are, we thought it was time to go and we all ran away as fast as possible. 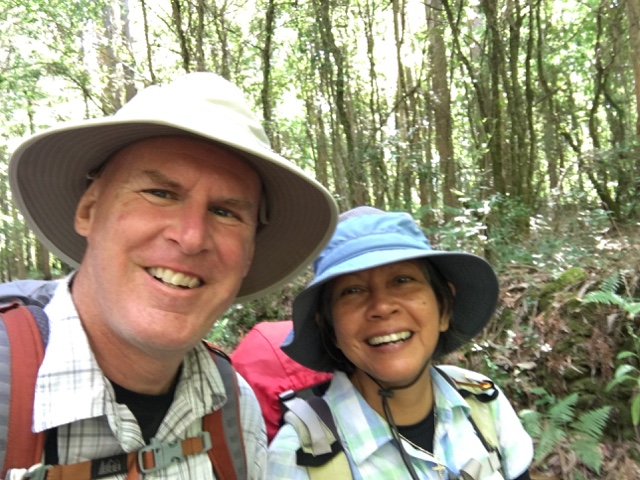 The final 6km was a walk around the Santiago Airport.  I remember this very well from five years ago but “improved” trails and new roads around the perimeter made it challenging to recognise specific spots.  Also of note here is the last real climb of the walk.  It is only 100m up but it is quite steep.  I moved only 50m or so before I remembered to check on Melanie.  She was 40m behind me already.  I just turned and started to climb some more.  When I turned around again, I was surprised that she was still 40m behind me.  I must have slowed down so I started pushing up the hill faster.  A moment later, I heard Melanie’s voice behind me, talking to someone who sounded Spanish or South American.  What’s going on?  I really got in gear now but in another few seconds, Melanie was passing me with her new Brazilian friend in tow.  And, I could not keep up!  After 800km, I finally figured out what got Melanie moving.  A young, interesting guy like Janek or the Brazilian toy-boy! 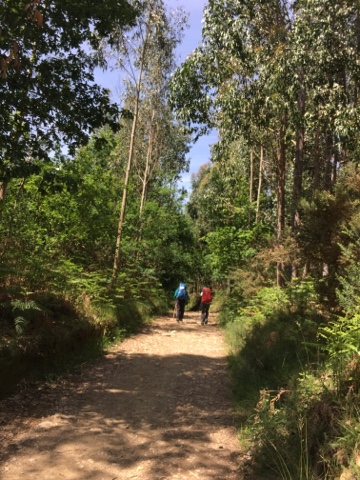 When we got to the top of the hill, I caught up to Melanie, shooed away the toy-boy with a not so subtle “Honey, did you remember to take your heart medicine?” and we continued around the airport fence.  During the descent on the other side, some cyclists on the walking trail – only 5m away from the newly purpose-built cycling trail – stopped to ask us directions to Santiago.  After counting to ten, silently in my head, and saying under my breath three times “Get thee behind me, Satan”, I directed them in the correct direction, then went the other way to our hotel.  We are staying in a typical, highway-side place, Hotel Garcas.  It’s everything you would expect and less.  They do have a decent bar though that has cheap eats. 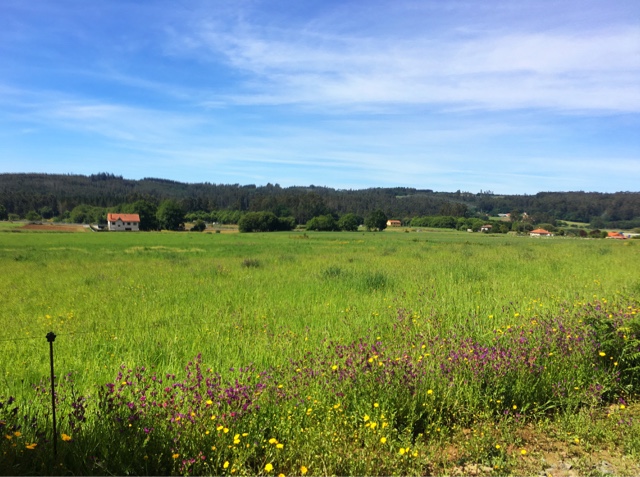 Dominika had told us that Bart was saying mass at 7:30pm near where their albergue was in Monte do Gozo, about 6km in front of us.  We had missed two previous masses so we didn’t want to miss another one.  After washing and hanging our clothes, showering, resting a bit and grabbing a quick bite, we took a taxi down to the “Monte do Gozo church”.  Sadly, we didn’t see a church where we were dropped off so we hunted for the next 20 minutes.  We asked down the hill at the Polish Albergue next to a larger church but the priest running the albergue told us in halting Pol/Span/Engl-ish that the only mass he knew of at 7:30pm was back up on top of the hill on the other side of the pope John Paul II monument – right where we were dropped off.  Leave it to a Spanish taxi driver to know exactly the church we needed.  I bet he had the mass times for every church in Santiago in his head.  Back there, we found the tiny Ermida de San Marcos with Bart standing outside.  Soon, there were a few dozen attendees including Gerrit, Jens and the girls.  Melanie was chosen to read the English intention.  Jens pulled the wrong straw and after telling the main celebrant an Angolan priest, that he spoke spoke Dutch, the priest heard “Deutsche” and gave him the German intention to read.  Thankfully, there were no “other” Germans there or the imposter would have been found out.
After mass, we walked over to the viewpoint, overlooking Santiago, and admired the cathedral’s steeple in front of the sunset.  We even got a special partial rainbow to mark the occasion.  It was easy to imagine the pilgrims of a millennium ago looking at a similar sight, after walking from their homes in France, Germany, Italy, the Low countries, Scandinavia, Eastern Europe, etc.  They must have been so much in awe but also so thankful.  Then again, they were only about to reach the halfway mark of their Camino.  They still had to walk home. 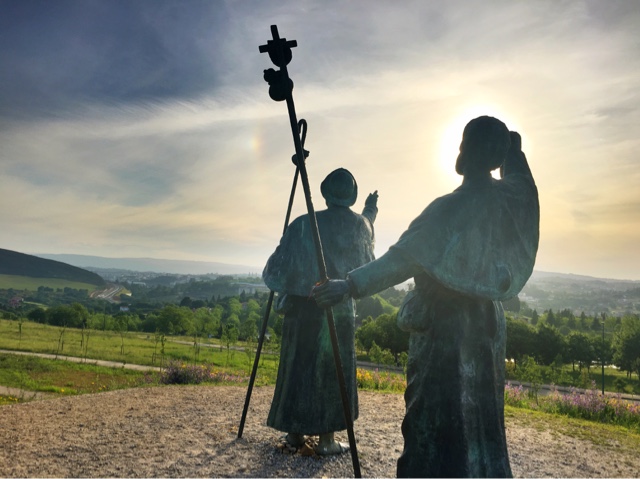 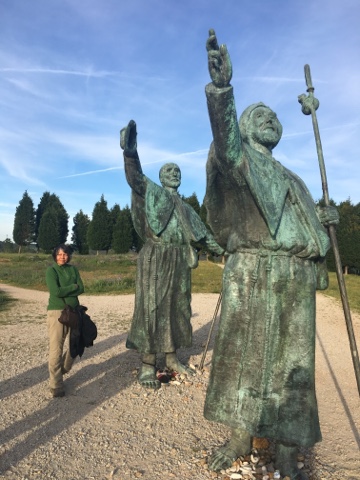 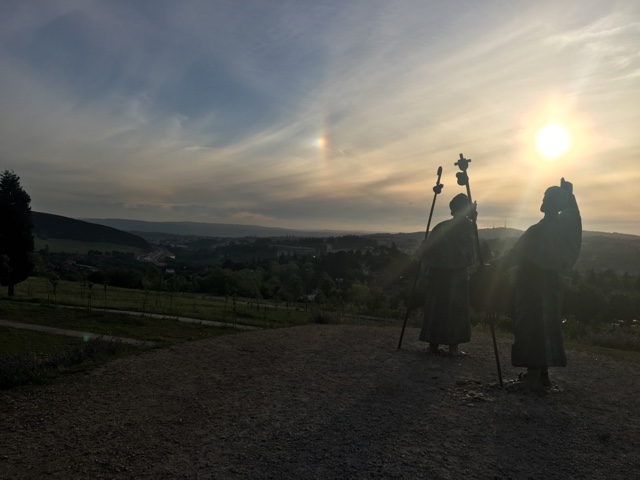 After a glass of wine with our friends, we just needed to get a taxi ride back to the hotel.  That was interesting only because we asked someone at the Polish Albergue if they could call a taxi for us so that they could identify the correct pick-up point.  The first person we spoke to there only spoke Polish so she asked for a English / Polish interpreter to translate what we wanted.  We explained to the interpreter, who told the Polish hospitalera, who then called for a Polish / Spanish interpreter to call the taxi company.  Then that person told the hospitalera that the taxi would be there in 10 minutes.  Fortunately, we overhead that on the phone because they were about to get the English/Polish interpreter back again.  That was fun.
Peace y’all. 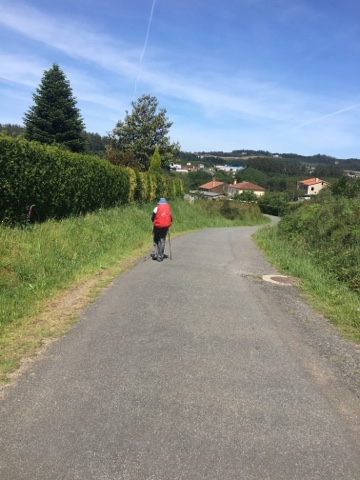 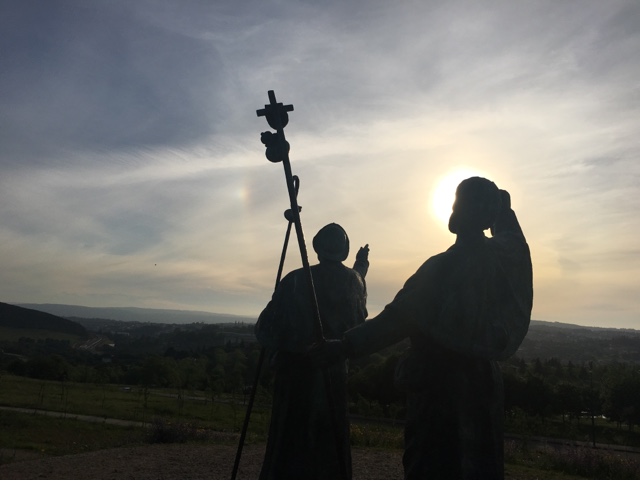