Skip to primary content
“Do not follow where the path may lead. Go instead where there is no path and leave a trail.” Ralph Waldo Emerson (this is better “life” advice than English rambling advice.  We MUST walk single file on most trails here as they are on public right of way footpaths through private property!) 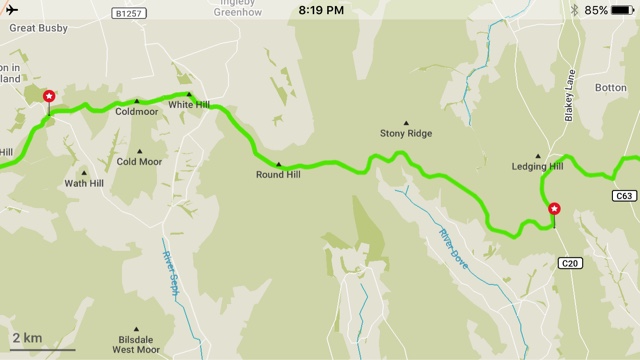 It wasn’t quite the perfect day for a walk but that didn’t stop us.  It helped detour us a little but not stop us.  This would have and should have been an epic walk with incredible views but with the morning “mizzle” (misty drizzle), visibility started at 100m and gradually improved to 500m, neither of of those distances being useful on a 450m hill top. 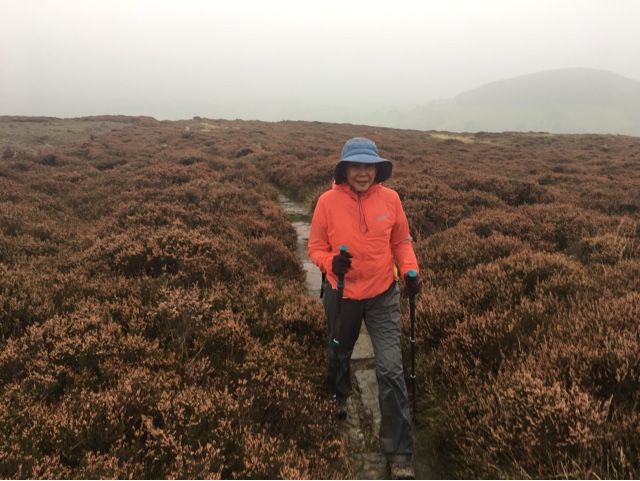 As explained yesterday, we took a taxi to the first spot of the trail that we had not walked yesterday.  It was almost 9:00am and 100m later, we were already climbing our first hill of the day.  This took us up to a high moor, covered in heather and grouse.  The path had been “paved” with flat rocks on the top and round slippery wet rocks on the ascents and descents.  It was stunningly gorgeous on the top and quite obvious that the views northwards would be stunning if not for the cloud we were walking in.  Occasionally the mist lifted enough for us to realise that we were walking some sections long a cliff where we could see about 200m downward, right over the edge.  That was fine until we got to the very slippery descent.  I kept imagining myself falling to my left and trying to use my raincoat as a parachute. 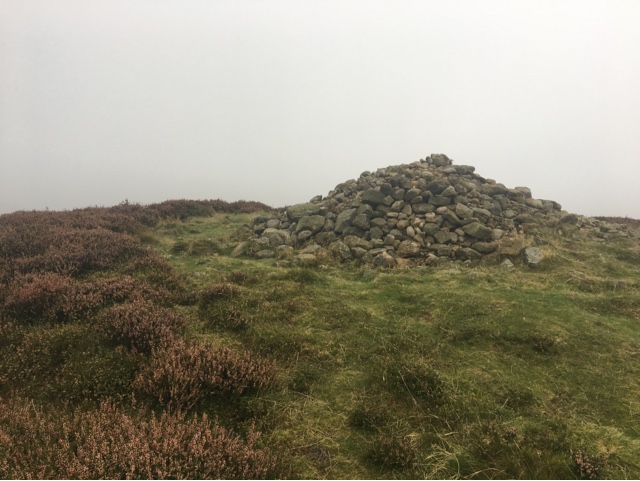 A 4,000 year old burial mound on the moor with unwelcomed additional stones added in recent years by walkers who think it is a cairn.

Off the first hill, we walked along a muddy trail through a forest around the next two hills as it was going to more of the same.  If it looked like the mizzle would lift, we would have gone up those two for the views but it was useless to slip and slide up and down just to see inside of another cloud.  As we rounded the bend to rejoin the trail though, we were shamed by a bunch of 10-year-olds and their teachers where were walkinging eastward up one of the mountains we had just bypassed. 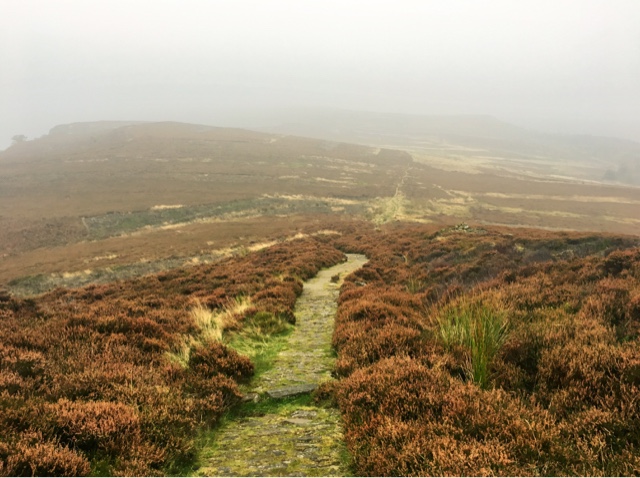 On the next hill (there were no other options), we started to walk up the trail again but we stopped to take off our raincoats (for the second time out of four).  While still stopped, an elderly British couple walked past us after exchanging pleasantries.  250m further up the hill, we found them sitting, huffing and puffing.  We asked where they were headed and they were going where we were, 17km and two steep climbs away!  We were quite certain that they would not make it the whole way.  FYI, I just passed them in the Lion Inn’s pub.  It took them about 90 minutes longer than we took but they made it and I ate my words.  They are an impressive couple. 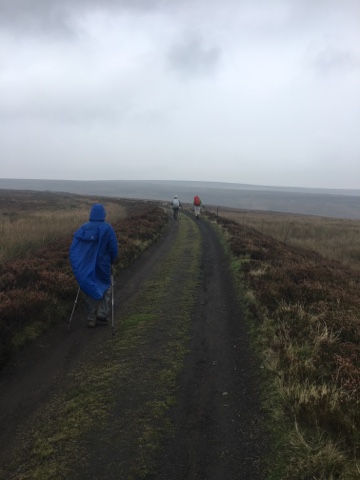 A note from the trail regards birds.  On the high moor, we see lots of grouse feeding on the new heather shoots.  The make a mocking sound as we pass, I assume because they know our legs hurt and they don’t need legs.  On the lower forests, we also see a lot of more pleasant pheasant.  They are humorous mainly because of their stupidity.  They are real bird-brains.  They would be perfectly camouflaged and have no reason to move as we pass.  They don’t know that though so they fly away as we approach (or just run in front of us along the length of the trail, looking back at us nervously every few seconds).  When they do flee, they scare the heck out of us as they jump up, with their wings flaps sounding like the typical child who has attached playing cards to the rim of his bicycle, touching the spokes, so it can sound more like a motorbike.  The pheasant also squawk at full volume to announce their departure.  No wonder people pay to shoot them down.

The other two climbs were more of the same, slippery up and down and beautiful heather-covered moors on the top with flagstone or gravel paths.  Once over the highest of today’s peaks, we had a simple 50m descent and little climb onto a old abandoned rail way right of way.  It was then 8.5km of walking on that winding path as it gradually climbed toward our B&B. 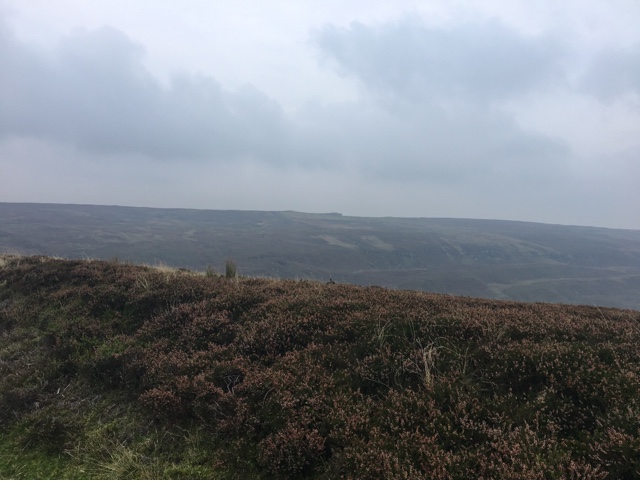 The Lion Inn, just made out in the centre, across the last valley.

The Lion Inn gets a special mention as our destination for the day, mainly because no one we have spoken to outside of the Coast to Coast walk has heard of Blakey Ridge.  The Lion Inn , on the other hand, is well known throughout England and has been since about 1550!  The restaurant and pub are in the original buildings, complete with a beamed ceiling at my nose level.  Apparently the Brits were shorter back then.  Our room is in the modern “wing” and has indoor plumbing as well as a system that makes the room brighter, just by pushing up a switch next to the door.  I call it the automatic candle lighter and blower-outer.
Melanie tells me that I have to mention two funny Brits that we met on the track today and who we also had a pint with at the pub after we cleaned up.  They passed us early in our walk but then we passed them when they stopped for tea at a cafe.  They passed us again a few hours later but were not so far ahead when they stopped to eat some food.  We passed them at this point and led them all the way to the Lion Inn.  They could see us across the valley as we took the final turn up the hill for the final 500m to the Inn.  At the pub, they said that they were amazed when they saw Melanie going at a “cracking pace” up the hill, well in front of me.  Melanie said it was because she could smell the beer at the pub.  That earned her a candy bar reward from the lads. 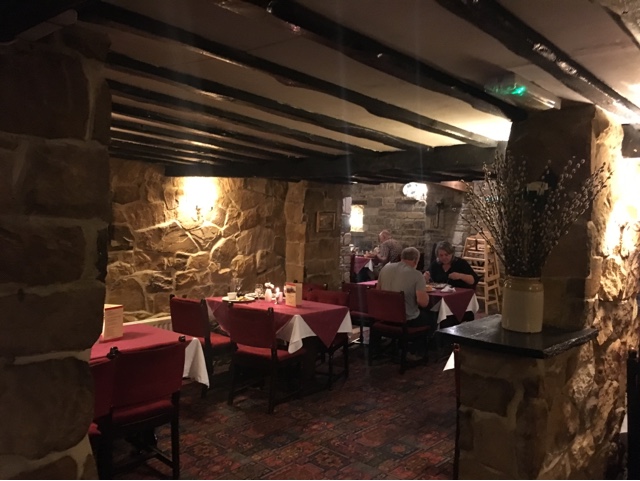 Two more days.  Tomorrow is moorland and then downhill all the way to Grosmont (the “s” is silent).  While we like walking through the high moors, we will be happy to see the last of the slippery rocks on the ascents and descents again.  As a Poe fan, I will quoth the raven and say, never moor.  Wednesday’s will be a little tougher but we will smell the sea and be happy.  Peace y’all. 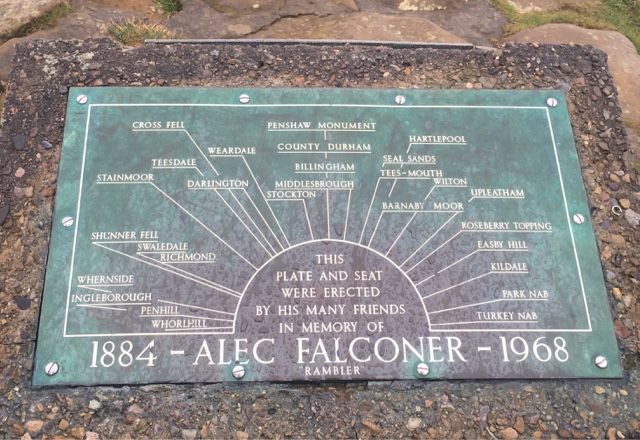 It would have been a great view but… 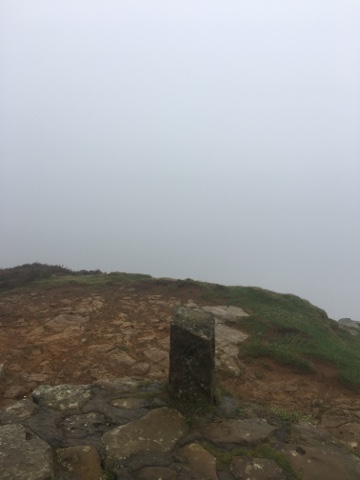