With a pretty accurate estimate, I’d say that today was 99.54751% road walking with the entire balance being on cobblestone. Thank God for that 100m stretch from the entrance of the Sant’Antonio di Ranveso Abbey. The cobblestones shocked my system so much that I forgot to turn my GPS watch back on after visiting the church.

From our hotel, it was a walk straight down a main road (Corso Francia) heading due west for 12km. As you can imagine, it was full of stop and go walking as we waited at crossroads, as well as all the other big city issues such as omnipresent graffiti, beggars, crazy drivers, rubbish, odd-ball characters, etc. Fortunately, there was also some lovely old architecture, nice people to chat with and plenty of places to stop for breakfast #2 and #3 and both lunches.

No building in Turin is free of graffiti. 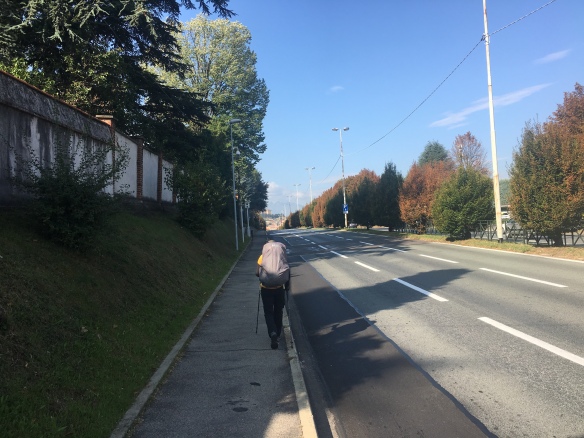 It was only when we reached the suburb of Rivoli that we had to look at the GPS trail. There were no trail markings that we saw until there but you can’t really go bad when you have a single street to follow.

In Rivoli, we had our first bend in the road and a little hill to climb which was simple (because it was VERY short) but that is where we used the wrong motivation. Melanie said that we should reward ourselves when we get to the top and have a little lunch at the first bar we saw. Good idea I thought. As I said, it was a short but steep incline as we passed several nice cafés, bars and restaurants. At the top was a square and right next to where we would start down the next section was the only bar. That’s a sign. We went in, ordered sparkling water and lemon soda then asked what food they had. The bartender pointed forlornly at the last little croissant left over from the breakfast crowd. We asked if there was any place else to eat something and he said, yes, back down the hill. Bummer. After a lemon soda, an old croissant and a KitKat bar, we set off again. 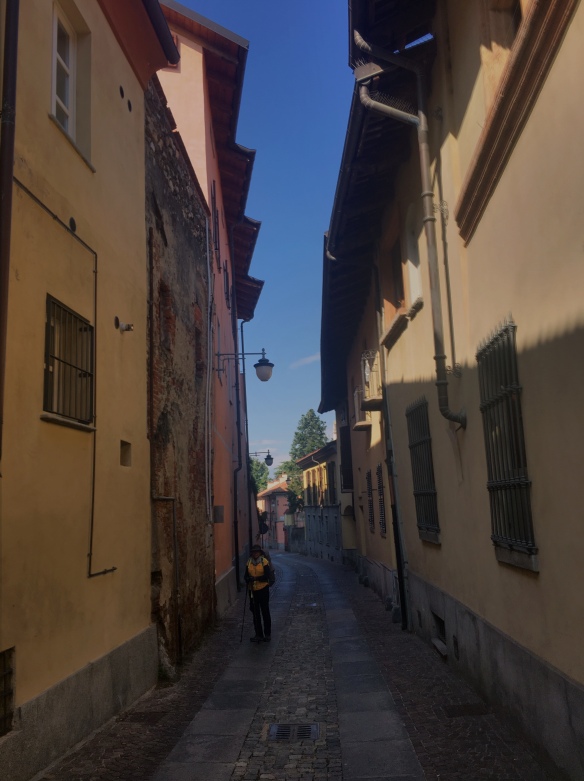 The next town we hit was called Rosta, at least I think so, based on the name of their railway station. That’s where we had our real lunch of cold focaccia pizza with tomato sauce, mozzarella and blue cheese. Delicious!

After a short walk to the historic 12th century Sant’Antonio di Ranverso Abbey where we stopped for a stamp in our credentials, we thoroughly enjoyed the cobblestone section and some of the nicer road sections of the day. Before long, we rounded the cemetery and a few hundred meters more, we reached the bed for the day. Sort of. This is where things got interesting and I didn’t take it well. 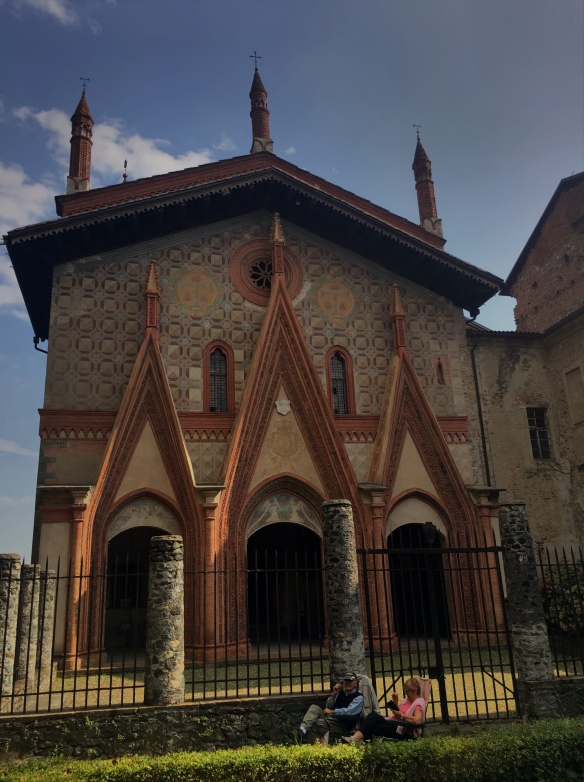 Melanie insisted that I be in one photo

The former hospital and pilgrim accommodations with a cobblestone road

I had used booking.com to book a room at Novocentro Charming Rooms. It was an odd name for a hotel but I’ve heard worse. We walked to 42 Corso Laghi and where was the hotel? I double checked everything, then it hit me. I had unknowingly booked a bed & breakfast. 42 Corso Laghi was clearly a business but there looked to be apartments above it. Unfortunately, there was a sign on the door that said they were closed until 3pm. It was 2:35pm so we sat on their steps and waited. A short time later, a man showed up and said that the B&B was around back, in the basement. Uggg! We could have gone straight there if we were told or if there was a sign. We started to walk around back but the man warned us that we had to call first. We explained that we had no phone for local calls and he basically said “Tough luck” before disappearing inside. We walked to the back anyway and the gate to the B&B was open. We called in as we opened the gate. Mr. Helpful upstairs called down from a balcony where he was waiting for us “Don’t go in there. I said you have to call first.” I slammed the gate and stormed off towards a nearby kebab shop to seek help. Cool hand Melanie, however, found another building resident who called the owner for us. The woman on the line spoke perfect English but seemed more interested in whether we got her confirmation e-mail or not because in it was a notice that check-in is only after 3pm (it was 3:10pm by now). I just asked her to let us in the room. She told us that she would call her housekeeper and let us in in two minutes. Okay, settled, right? Just then, I hear a phone ring and a girl standing near us, who watched the whole thing play out, answer her phone. This cannot be the housekeeper, can it? Sure enough, she beckons us through the gate to a room…. that was used last night but never cleaned up. What? We sat outside while the housekeeper cleaned the room and changed the sheets. The mother called the housekeeper again who passed the phone to Melanie. She suggested that if we weren’t happy she could refund our credit card and we could look for someplace else! Huh? We explained that we would be happy once we got into the room and we weren’t going to walk around town looking for another place to sleep.

We’re in the room now. It’s nice. Maybe not worth the aggravation but we have a bed. That’s a good thing.

I should also note that we were stopped at least a half dozen times today by people who wanted to find out what we were doing. It’s always great to chat but I should have studied up on my Italian. I understand most questions because they are often the same. I can barely reply though so conversations are rough. It does lead to a laugh occasionally though. Today, two older men sitting in the bar were chatting with us when one of the said something like “puoi farlo perché sei giovane”. That threw me for a loop so we asked the bartender if he could translate. It took a bit but essentially they were saying that we could do the walk because we are young. At that both Melanie and I burst out laughing. Melanie was the first to recover and thank them but…